by Kerry and Jessie
(Springfield, VA and Liberty Alabama)

She says “Dear dad, I wonder if you have the crowd numbers for this past week, the week after thanksgiving? We were thinking of going that week in 2018 and saw that 2016 was very crowded, but wondered if 2017 was the same or if 2016 was a fluke? Wish we could go the week in December you recommended, but that doesn’t work for us. Just wondering if you have numbers from last week?

Thanks for your help,

And then the other question came from Jesse in Liberty, Alabama. “What are crowds like this year for the week after thanksgiving 2017?” 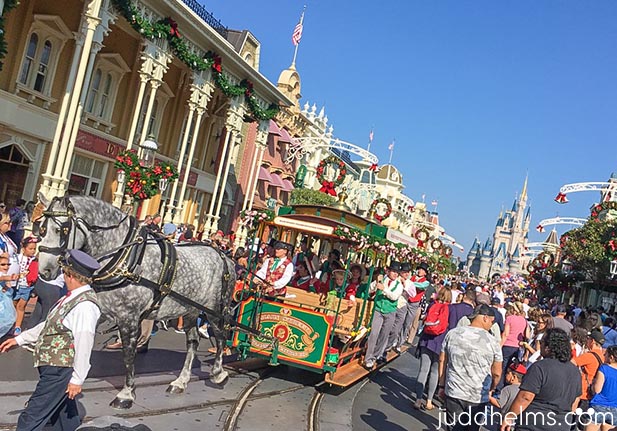 It’s pretty busy, but boy is it pretty – Photo by Judd Helms

First off I don’t get any information from Disney on crowd numbers, nobody does, it’s one of the things that they are very restrictive about. They don’t tell anybody what the crowd numbers are.

I get my information from reports of people in the parks, and there’s a couple of other sources that I look at for information for the crowds. The week after Thanksgiving last year (2016) was pretty, pretty busy compared to years before. In 2014 and before that was one of the least busy weeks of the year. 2015 when Disney changed the ticketing structure, that all changed. Summertime, July 4th, was not a busy day this year. It’s always been one of the busiest days of the year until they did the change in the ticket structures.

So last year crowds were up the week after Thanksgiving, very noticeably up over the years before. This year, they weren’t quite as high as last year. Now they weren’t back to the 2014 levels by any stretch of the imagination, but 2016 was like here, 2017 just kind of right below it.

What you have the week after Thanksgiving. Thanksgiving day, the crowds are huge. Friday, crowds are huge. Saturday, crowds are big. Sunday, they’re not quite as big. Monday, they’re still kind of big. Then Tuesday they go from heavy to moderate or low moderate. Tuesday, Wednesday, Thursday, moderate, low moderate. And then they bounce back up for the weekend. Weekends around Thanksgiving and all of December pretty much are pretty busy. But the middle of the weeks are not as busy.

During the middle of the week, the week after Thanksgiving, the crowds were moderate to low, but the weekend crowds were huge. So while it wasn’t as crazy as last year it wasn’t back to the no crowd level. It’s still a good time to go, you’ve got moderate or less crowds. Busy crowds on the weekend.

But even with the crowds, it’s still Christmas at Walt Disney World. The Most Wonderful Time of the Year.