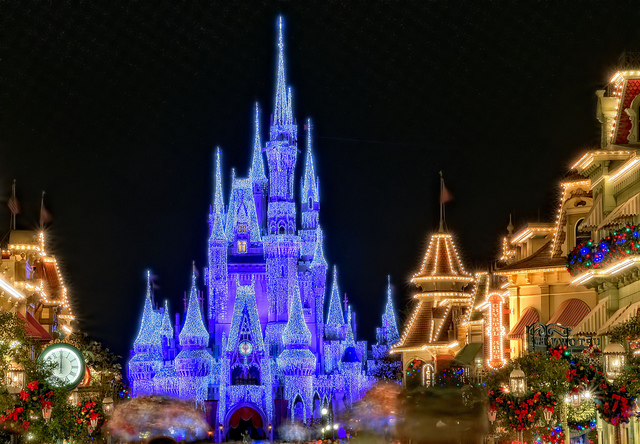 A few years ago, Imagineers at Walt Disney World decided that an extra holiday touch was needed to Cinderella Castle. So they decided to light up the castle using Christmas lights and the results are fantastic and continue to get better each year. (There was the one time Stitch toilet papered the castle, and the epic birthday cake fail).

The imagineers had a vision for the castle to look like it had been dipped in sugar. If you have seen the results it is hard to argue with that vision. To achieve the dipped in sugar look it takes 200,000 lights, and hundreds of hours of work during the six week period it takes to complete this work. During this six week period cranes are brought in after the Magic Kingdom closes and lights are hung all night long.

Some think that the lights are just strung up on the castle. Well I am here to tell you that the process is more involved than that. The lights are attached to fisherman’s net, which is dyed to match the castle walls and then placed careful on the walls. Then it takes 18 miles of electrical cable to bring the lights to life. Wow that is a lot of juice.

For Cinderella’s Castle to be transformed in the year 2012 it took 65 special helpers 5 weeks. With the help of two cranes 200,000 lights were placed on 32,000 square feet of fishing net held up by 15 miles of cable. To add an extra effect the helpers added 500 strobe lights for sparkle.

Each night the Magic Kingdom makes a show out of turning the lights on. Mickey Mouse along with his beloved Minnie Mouse and their friends appear on stage in front of the castle. They look at the light up and down Main Street U.S.A. and then see the castle and think it needs a little magic.

All of her friends and Prince Charming agree. Then the Fairy Godmother flicks her wand and the castle transform into a glowing winter ice palace. This show happens nightly starting November 6th until the lights come down in January. The show starts at 6:15 p.m. Other shows that feature the castle include Holiday Wishes and Mickey’s Once Upon a Christmastime Parade.

If you are going to visit during this time of year, you will not want to miss seeing this special addition during the Holidays. Guests can even make an entire special night of seeing the Magic Kingdom by reserving tickets to be a part of Mickey’s Very Merry Christmas Party. Let Dad’s Friends over at Pixie and Pirate Destinations help you book your tickets now!