Remember, this is meant in good fun.

A hurricane, or should we say in honor of or good friends from the other side of the world, a Typhoon is bearing down on Walt Disney World. In just a couple of short days, a hurricane is predicted to graze the east coast of Florida bringing torrential rains and winds to Orlando and right to our favorite theme park itself.

Since I don’t have the question page going right now (gonna take a break until after the big wedding), I thought I’d answer the question I’m sure is right on the top of all of your minds. It would go something like this.

Hey Dad, we love your site. It’s the greatest site on the internet. We’ve been on it for weeks and can’t find the answer to this small question. Can you help? (Yes, that is the proper way to start a question.)

Our question is, if a hurricane was predicted to hit Walt Disney World during our trip, number one should we go ahead and go on our vacation or should we stay home? If we do decide to go what could we do during the hurricane?

And here would be Dad’s Answer 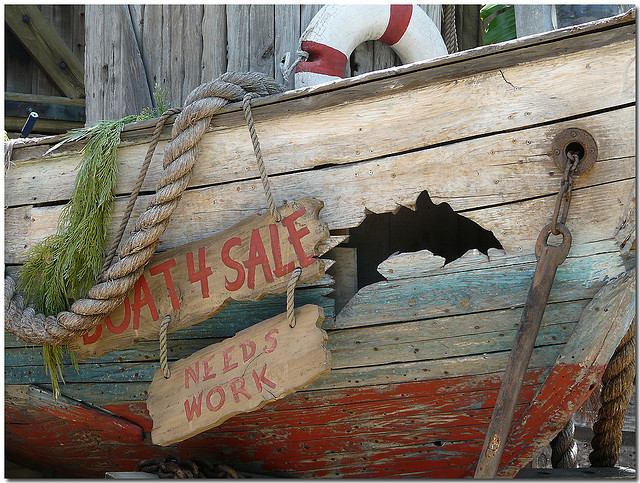 Thanks for the great question. Yes, Dad’s site is the best on the internet, just make sure you are checking it every day because you just don’t know what will pop up next.

Now about the Hurricane/Typhoon thing.

It has happened before. That’s how Typhoon Lagoon was born. Legend has it that a freak (funny how that word keep popping up when it comes to the Disney World Water Parks) Typhoon hit a tropical paradise in the Orlando area.  When the damage was done, a whole new tropical oasis was created. The Shrimp Boat “Miss Tilly” was deposited at the top of Mount Mayday and sits there to this day and a lot of wreckage from the storm can still be seen strewn all over Typhoon Lagoon.

Typhoons at Disney World are not a bad thing.

But hurricanes are. Hurricanes are serious. I don’t want to get too silly because you should take it seriously when there is a hurricane predicted to hit central Florida. The last one closed Walt Disney World for one whole day and had people stranded in the hotels for up to a week. Now I could make the obvious jokes about how terrible it is to be stranded at Disney World, but I won’t because it was a real hardship for a lot of  people.

Now on to your questions …

First, should you go? Yes, you should. The odds of a hurricane actually hitting Orlando are pretty remote. It has happened, but it’s not very likely. Also, unless you purchased travel insurance, it will cost you a pretty penny to cancel airline tickets and hotels and travel packages.  (This is one of the reasons Dad always recommends you buy travel insurance.)

The second question is a little tougher. What can you do during a hurricane? Disney had lots of inside hotel parties and fun and games during the last one. They asked their guests to stay in the hotels. (The parks were actually closed for about the only time ever.) They did all they could to make their guest comfortable and safe.

If the storm just grazes Florida and you end up with rain and wind, go on to the parks. The crowds will be very small. Most of the rides will be open because they are indoors. (I wouldn’t want to ride Test Track, Big Thunder Mountain Railroad or Expedition Everest.) Bring some ponchos (or buy the semi-cool Disney ones in the hotel gift shop) and hit the parks. You might as well. You’ve paid the money. It’s just a little water.

I would suggest you take 2 pairs of shoes, or get some that can get wet. That way when it all dries up your feet will survive.

<INSERTQUESTIONASKERNAME>, I hope you have a great time at Walt Disney World. Don’t worry about the hurricane/typhoon that’s bearing down of Florida. There’s only about a 100% chance that it will ruin your vacation (Oops that’s a 10% chance.) You’ll have a great time and remember to come back and tell us all about it.

Yep, that’s probably the way dear ole’ Dad would answer a question about a hurricane or typhoon bearing down on Walt Disney World. Just in case you were wondering.