Hi “Dad”! Disney holidays are a must-do in my family. Now my sister and I have flown the nest, its turned into a “last family holiday” that my parents have organized twice so far. The last time, we were in Orlando with two young men in tow (one belonging to my sister, one to me).

There’s no way to put it nicely… my man hates Disney. Won’t have anything to do with it. We had to wait for him to fly home early just so the rest of us could go to Hollywood Studios. Man number 2 is indifferent, and is adamant he never stepped foot onto Disney soil. We fly out in November and the boys are finally willing to give it a go.

My man wants to watch any baseball, football, basketball or ice hockey while we’re there. Do you know where’s best to watch games? Will there be any onsite? And can you think of any manly activities they can do without realizing that they are at the happiest place on earth? This is a brilliant site, thanks a lot! 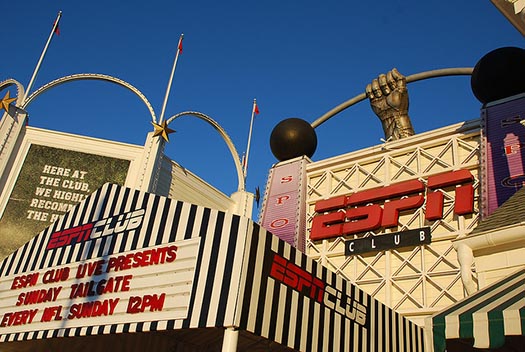 The ESPN Club Photo by afgen

I’m sorry to hear you’re having so much trouble getting your partner to embrace the magical world of Disney. But, as Mrs. Mom often points out, sometime men just take some time getting used to new things. Maybe they’ll come around once he sees that Walt Disney World is not only the most magical place on earth, but it’s pretty manly to boot. Let’s dive right in to Dad’s Manly Men’s Guide to WDW!

Let’s start at the beginning: where can you watch televised sports at Walt Disney World? If they’re really lazy and you’re staying on property, he doesn’t need to go any farther than your hotel room! Walt Disney World hotels provide 6 different ESPN channels (Disney owns ESPN) plus The Golf Channel and NFL Network, in addition to dozens of other channels which play sports as part of their programming.

They can also watch televised sports at the ESPN Club located at Disney’s BoardWalk (home of the $10 hotdog). Many of the bars throughout the resort also have TV’s that sometimes play sports (especially during playoffs or the Olympics) but the ESPN Club is a sure thing.

There are also sports happening in person at Walt Disney World in November that they may be able to attend, including the Disney Wine & Dine Half Marathon, the Old Spice Classic – Division 1 Men’s Basketball Tournament, Disney’s Junior Soccer Showcase, and the Pop Warner Superbowl. You can find out about these by visiting the ESPN Wide World of Sports website.

Disney also boasts 4 golf courses the 18 hole Lake Buena Vista and Osprey Ridge courses, the 9-hole Oaktrail course, and the 18-hole PGA Palm and Magnolia courses. The guys can definitely play a few rounds of golf, and they may even be able to catch some of the Children’s Miracle Network Hospitals Classic, a PGA tournament happening November 8-11, 2012. 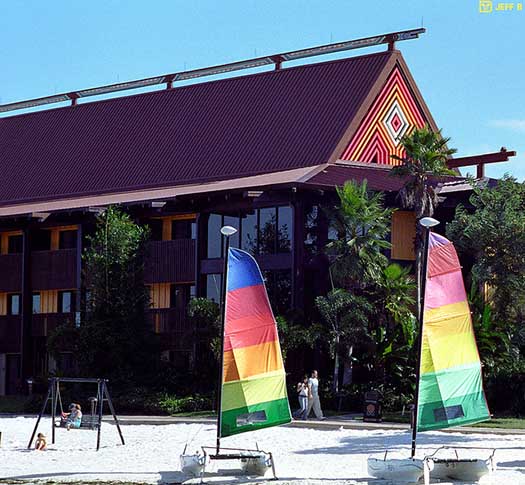 The Polynesian Resort is the most manly place on earth Photo by Jeff_B.

If getting into the action is what they’re about, Walt Disney World offers so much more than just golf. Most of the Deluxe and Moderate Resorts have watercraft marinas where you can rent boats including Sea Raycers, sailboats, SunTRACKER pontoon boats, Boston Whaler Montauk Boats, pedal boats, kayaks, and canoes. Or, they can arrange for a guided fishing excursion in one of Walt Disney World’s lakes or even Seven Seas Lagoon.

Yep, there is plenty of things real men love. In fact, in Dad’s mind Uncle Walt is a real hero to all men.

All of that is outside the wonderful theme parks. What guy doesn’t want to hop in a limo with Aerosmith blaring in the background and zip through the streets of LA at Rock ‘n’ Roller Coaster which is the best of the Disney World Roller Coasters …

Emma, I’m a little biased, but I think any real man should love Walt Disney World. Life is not all about sports. (Some men need to learn that.) Life is about developing relationships with the family. That’s what makes Disney World so special. Uncle Walt created a place where a Princess can have as much fun as the King himself. Hope you have a great trip.