We will be checking in on different times of the day. Two flying in from New Hampshire, three coming in from Arizona. We’ve noted in our reservations to request adjoining rooms. Do you suggest checking in, in person, or 60 days out and check in online? Thanks.” 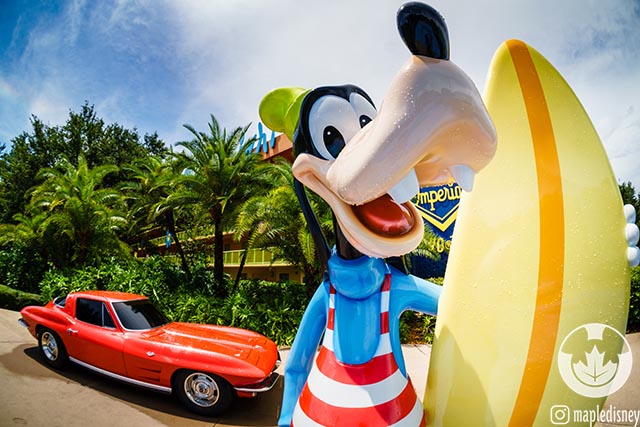 Here’s what Chris says, “Congratulations, you are going to Walt Disney World. Getting adjoining rooms at the Pop Century or at any other Disney Resort can be a finicky animal. Guests are all over the map with check in and check out dates. The folks that assign rooms need to take all of the different views and accommodations into account. This is why items like adjoining rooms can be requested, but not guaranteed at Disney.

The most important thing about landing adjoining rooms is having that information in your reservation.” Check, you’ve done that. “This can be done during the process of making the initial reservation, or simply by calling Disney or having your travel agent call them and put a note in your reservation. Since you’re arriving at Disney at different times, I would recommend that you go ahead and check in online.”

“Doing the online check in will allow your rooms to be released as soon as they’re available, allowing you to bypass the front desk. This will be helpful for the folks that arrive later. It will prevent the front desk from giving that room to another guest who arrives before them. In order for the online check in to work, you need to have your entire reservation paid for before your arrival. Be sure any outstanding charges are taken care of before you arrive.

The last step would be to call the resort directly the morning of your check in date. Just provide a general reminder that you are looking for adjoining rooms for your trip. You can get in touch with your Disney resort by calling 407-WDW-DISNEY and asking to be connected to your resort.”

It really is kind of one of those things that Disney can’t guarantee that it’ll happen. Will it happen? Probably. December, you didn’t say when in December. Kind of depends on when in December. If you’re talking about early to mid December when the crowds are a little lower, then it’s possible. Later in December, it’s a little harder.

We’ve gone several times asking for connecting rooms or adjoining rooms and pretty much have always gotten them. In fact, every time we’ve asked for them, we’ve gotten them. They don’t guarantee it, but typically it does happen.

If you’ve got a subscription to Touring Plans in their hotel section, you can go and you can choose your room that you want to request and you can actually request that room.

I would, number one like Chris said, make your adjoining room at the Pop Century request is in your reservation, which you’ve already done. Then do online check in, because that gets the rooms assigned earlier and call the resort that morning, just be nice, gently, “Hey, just checking to make sure that you know we want the rooms to be together.”

That’s about all you can do and then it’s up to Disney. They’ll work their magic, and they’re pretty good at it, and they do it most of the time.