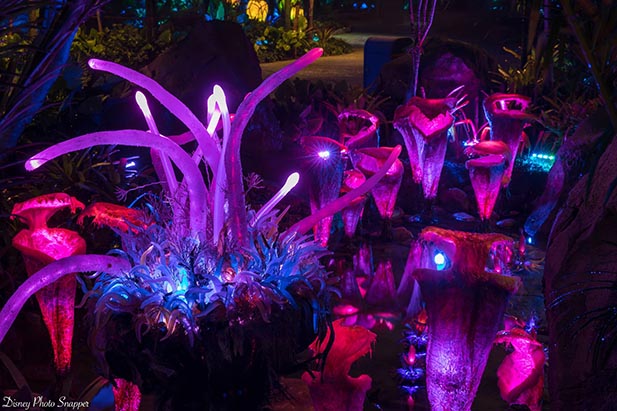 Pandora is SPECTACULAR after dark – Photo by Brett
Svenson

I assume she’s talking about Animal Kingdom because that’s kind of the only park that doesn’t have nighttime hours. And it’s the title she used when she submitted the question.

Tiffins Restaurant opened last year as part of that expansion into the evening, so they’ve got dinner locations at Animal Kingdom. You can even go on the safari after dark. They really do want to make Animal Kingdom a park that goes into the after dark hours.

So there’s no doubt in my mind that in 2018, 2019, 2020 that’s gonna be the pattern going forward. I think you’ll see the dining options expand at Animal Kingdom as this becomes more popular. You’ll see more sit down table service restaurants so there’s more night time dining options.

Speaking of After Dark Hours, the topic for WDW Magazine this month is After Dark at WDW. It’s really a great issue with amazing (as always) pictures. Check it out.

The After Dark at WDW issue of WDW Magazine

But absolutely, bottom line is there’s definitely going to be after dark activities at Animal Kingdom in 2018.