Ever dreamed of saving the world?  By playing Disney’s Phineas and Ferb Agent P’s World Showcase Adventure you (and your family) can do just that. 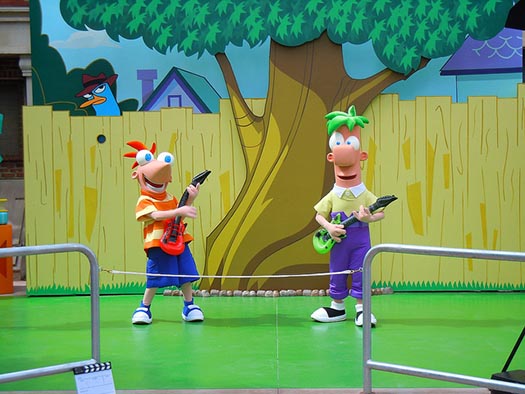 Become a secret agent for the day (or about 30-45 minutes – the estimated playing time for this adventure) as you team up with Agent P to fight crime and hunt down villains.  Use clues delivered on your FONE to experience World Showcase like never before.

To take part in Disney’s Phineas and Ferb Agent’s P World Showcase Adventure, first head to a Recruitment Center – you’ll find them at the Odyssey Bridge, the International Gateway, and in Norway and Italy Pavilions.  There you will receive a handheld, cell-phone device called a FONE (Field Operative Notification Equipment).

Player chose one of three countries to begin their mission with. About 30 participants can do a single countries mission at a time. At each country pavilion kids are challenged to complete the mission and defeat the bad guys. This takes about 30 minutes but is a great way for the kids to interact in World Showcase.

Some of the activity centers are outside and some are inside for a break from the elements. Defeat the evil Dr. Doofenshmirtz by completing all the missions.

Adventurers who complete the challenge will receive a special surprise at the end of the mission.

Video from the creators of Phineas and Ferb

It’s great to see Disney’s creativity hard at work to take the aging World Showcase and reinvigorate it with this innovative game, appealing to young and old alike. Many things at Walt Disney World come and go. Kim Possible is no longer the cool kid on the block so they replaced her with Agent P. Same game just a different name.