Alien Swirling Saucers opened on June 30, 2018 as a part of Toy Story Land! What a fun little ride.

While this is technically a spinning ride, it’s less like the Mad Tea Party and more of a gentle whip ride, using the same ride system as Mater’s Junkyard Jamboree in Disneyland. 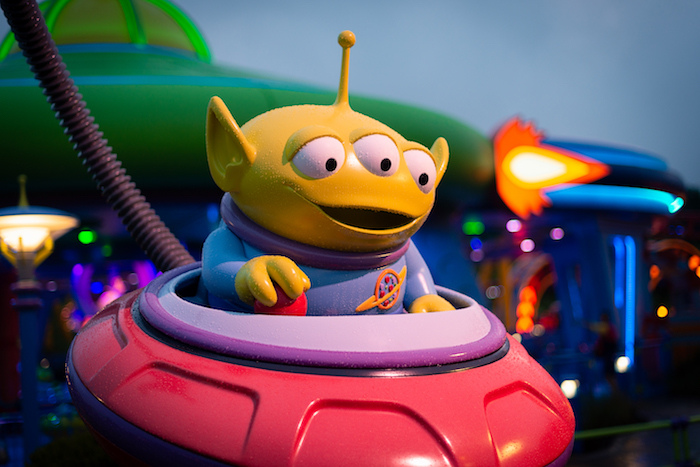 Want to take a swirl with this little guy? – Photo by Courtney Reynolds

You’ll head straight to the back of Toy Story Land and follow the giant Buzz Lightyear to find Alien Swirlg Saucers. The queue starts outside among the “weeds” and “grass” of Andy’s backyard, where you can spy some pieces from the Aliens playset Andy won at Pizza Planet lying around.

Next, head “inside” the playset (the quotes are because you’re never really inside in this queue – there is a roof but no walls enclosing you from the Florida heat!) and check out some cool theming in bright, galactic colors. It’s sort of similar to the style of the Buzz Lightyear Space Ranger Spin queue. 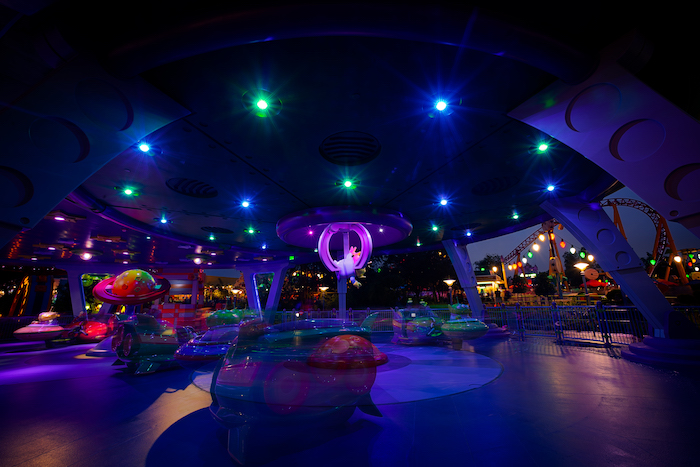 It’s even cooler at night – Photo by Courtney Reynolds

In the day, this ride looks awesome – bright colors, little green men, and lots of fun Pizza Planet stuff to look at. But at night it’s even cooler, since you can really see all of the neat lighting effects. Be sure to look out for the Alien who was choosen by The Claaaaaaaaw.

Grab your partner and climb onboard your very own Alien Swirling Saucer. The seats fit 2 – or maybe 3 if you have 2 kids and a grownup. Buckle in and then your Alien will start dragging you all around the floor.

This is a (very well themed) classic whip ride – while it doesn’t spin quite like the Mad Tea Party it does throw you around a bit. You’re basically following a pattern on the floor around 3 turntables so you move all around the attraction space. When you make a turn you slide or “whip” to the opposite side. It’s not the worst for motion sickness, but not the best either.

The songs they play are pretty cool – there’s 8 different songs, and you get 1 per ride so each time you board will be a little different!

There’s no specific post show – just exit into Toy Story Land and keep having a great time being miniature! 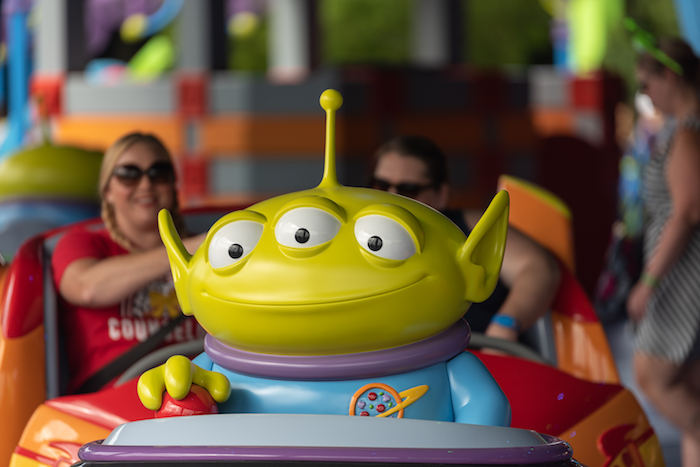 Alien Swirling Saucers draws crowds from the second the park opens. Lines are expected to be at least an hour long for several months.

Who wants to ride Alien Swirling Saucers!? Are they tall enough? Riders need to be at least 32 inches tall for this attraction. 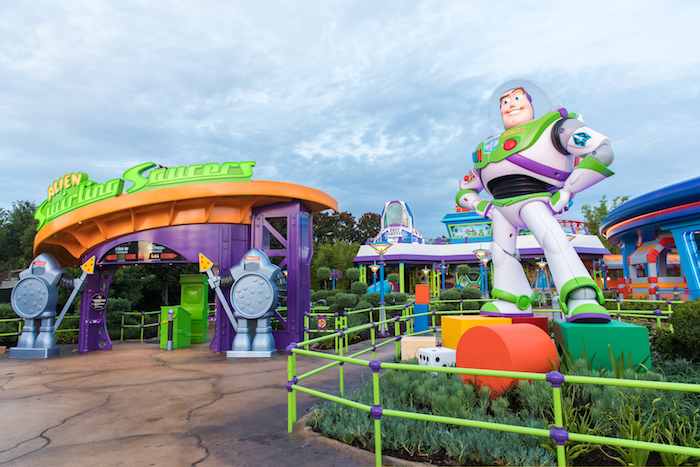 Dad’s not too sure about this one (spinning and Dad don’t mix) but the kids are sure to love it! It’s pretty cute to look at, even if you’re just watching your family have fun on it.