“Hello, we were lucky enough to get the chance to go to Disney at the end of October. I want to make dinner reservations at Be Our Guest, but it says, ‘No availability’. Also, my mother and I are both handicapped. What is the best way to rent an ECV scooter and park hoppers? We are staying in a timeshare so we need a car also. Thank you for your help.” 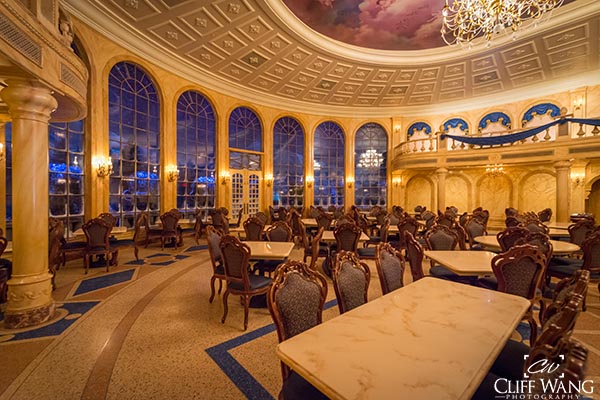 Be Our Guest is beautiful – Photo by Cliff Wang

Christine, unfortunately, getting reservations for Be Our Guest is hard. It’s one of the first restaurants that’s completely booked at that 180 day mark. That’s why I was just talking about the 180 day mark, because that’s when you make the dining reservations.

So, if you want a reservation at Be Our Guest, you really have to make it at that 180 day mark, to, not guarantee it, but to have the best chance to get it.

Now, there are some other ways to get the reservations if it’s not at the 180 day mark. Not saying that these will work, but these are just some things you can try.

The other thing you can do is TouringPlans. Our partners at touringplans.com, they have a reservations finder app. If you’re a member of Touring Plans, you can go over to Touring Plans and look for their ADR reservation finder. You just fill it in, and if one comes available, they’ll send you an email and say, “Hey, there’s a time available at …” and if it fits your parameters you’ll get an email for that. They’re computer wizards so this is the kind of thing they do.

Okay, so for ECVs, the little scooters, for you the best thing is probably going to be to rent them in the parks. There are companies that rent them for the whole time that you’re at Walt Disney World, but since you’re staying off site and you’re going to probably be driving, that’s probably not going to work, and you’re going to want to rent them in the parks. Each park has a rental place where you can rent one of the ECVs. Those places are right by the front entrance.

All right, so, rental cars. Not much really I can help you with on rental cars. I typically use either Alamo or National, which you can get at the airport, and they’re right there literally at the airport. You walk out of the terminal, across the street, and right in the parking garage, in the basement of the parking garage, is your rental car. So Alamo and National are both right there.

But that means you cannot go from park to park in the same day. You can stay in the same park all day and the regular tickets work in all of the parks, but the park hopper option allows you to go between parks every day.

Bottom line is, the Be Our Guest, you’ve just got to keep trying, even the day of, you might get in. Tickets, ECVs, and rental cars, just pick a rental car company that you’re familiar with, tickets, the Official Ticket Center, and ECVs, rent them in the parks.