“Hi, we are a family of four, with kids ages 10 and eight. I would love to go stay at a Disney resort, but coming from Australia we have to pay more using Australian dollars versus American dollars. I was willing to book a family room at the Dolphin hotel, but I was thinking that a two bedroom suite at the Hilton DoubleTree would be better.

We are planning on a 10 night stay, mid to end May. I value space and separate beds for my kids above everything else, especially on a 10 night stay, but I don’t wanna compromise too much for location, pools, shuttle, et cetera. Which would be better pick out of these two, or any others you think would be suitable? Thanks in advance.” 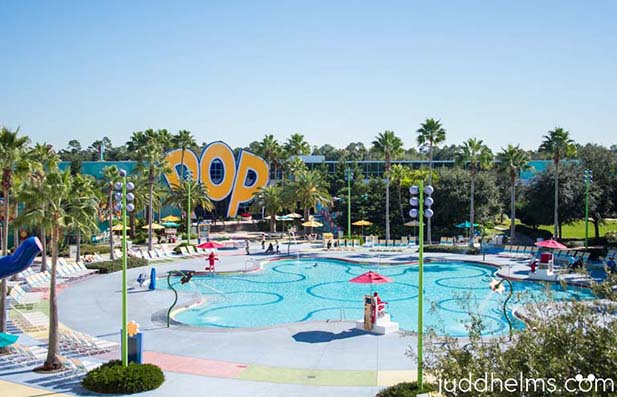 You might consider 2 rooms at the Pop, it has a cool pool – Photo by Judd Helms

So I asked Destinations to Travel to answer it, I got an answer from Stephanie Walsh, and here’s what Stephanie says, “When comparing two resorts you mentioned, I think the best option would be the DoubleTree Suites by Hilton. While the Dolphin is located in closer proximity to the parks, the price point is higher than the DoubleTree.

Also, it has limited rooms that would not allow your children to have separate beds. At the DoubleTree you can reserve a two bedroom suite for a little over $300 a night,” that’s a good price. “These suites have one king bed, two queen beds, and a sleeper sofa. This resort is located very near to Disney Springs, has a nice pool, and offers scheduled shuttle service to the parks.

Some of the problems that arise from staying off-site are, you don’t get Magical Express. It costs about $37, at a minimum, to get from the airport to Walt Disney World and back, $37 each way. You also would not be able to make fast pass selections at 60 days prior to check-in, but rather 30 days. And you can’t add the Disney dining plan to your stay. Another drawback may be the inconvenience of the schedule shuttle service, versus the continual bus service at a Disney resort.”

“If you’re interested in staying on property, and have the use of Magical Express, of FastPass, the Disney Dining Plan,” she recommends the Art of Animation, “or a family suite at the All-Star Music. That layout would allow your children to have their own beds, it’s around $400 a night. Also, you could go to a cabin at Fort Wilderness, with a queen bed, bunk beds, and a sleeper sofa, and those are about $350 a night.”

The Swan and Dolphin is probably not the best choice for you, but it’s probably the second best pool at Walt Disney World. It is now owned by Marriott, so if you have Marriott rewards points you could stay there a little cheaper. Those are just some of the options.

The bottom line is, the Hilton DoubleTree hotel is probably your best bet, but there are options.

I always recommend you stay in a Disney resort, but there’s no doubt that they’re expensive. Two rooms at, say, the Pop Century, or one of the All-Stars, would be another choice, and it would be probably in that $300 to $350 price range. That just gives you a range of options.

You’ve got lots of options, get ahold of Destinations to Travel, get in touch with them. The link will be down in the comments below. Get in touch with Destinations to Travel, and let them help you sort that out, that’s what they do. They are specialists in where to stay at Walt Disney World, and then can help you sort that out.