One of the highlights of Mickey’s Not So Scary Halloween Party is the Boo to You Parade. You won’t believe how fun this silly parade really is.

The parade starts off with a spooky ride through the Magic Kingdom of the headless horseman right at the stroke of “midnight”. Then comes the “scary” parade full of zomibies, grave diggers, and lots and lots of Disney characters.

And it happens twice each night during Mickey’s Not So Scary Halloween Party.

The Boo To You Parade 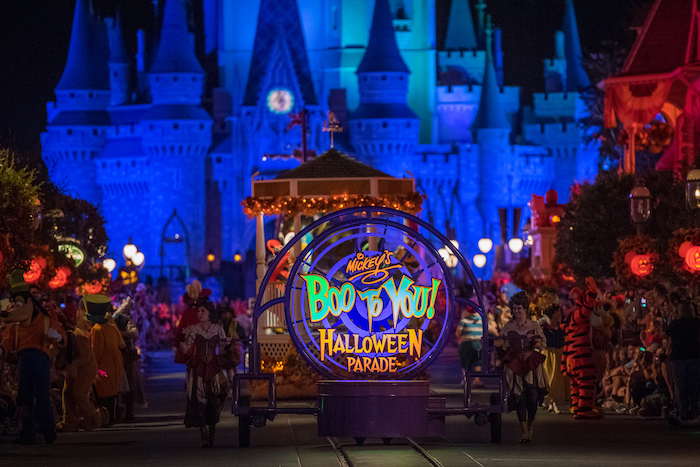 The Boo to You Parade is one of Dad’s favorites. Photo by Cliff Wang

On select nights in August, September, October and yes, in November, Disney celebrates Halloween at the Magic Kingdom in style with a party. A really big party complete with rides, a parade, small crowds (usually), trick or treating and the biggest fireworks show you can imagine. 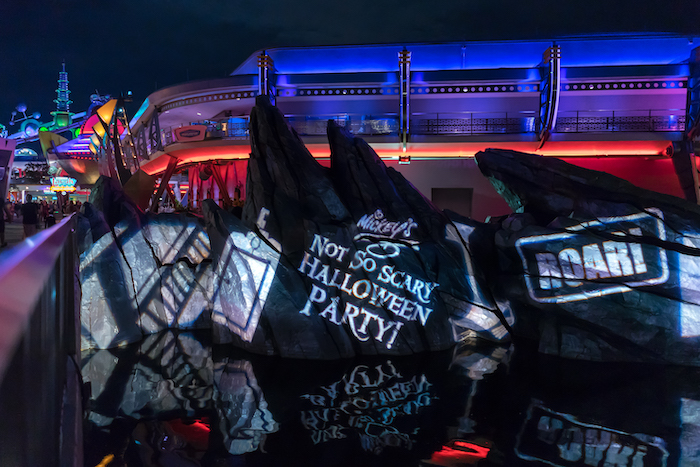 Celebrate Halloween at Mickey’s Not So Scary Halloween Party! Photo by Rich Ramos

The party starts at 7:00 and runs until or after the witching hour.

This is one party you won’t want to miss.

The parade kicks off with all of your favorite characters dancing through the streets. Snow White and some of her dwarfs, Alice and her friends from Wonderland, Pluto and Goofy, and Tigger and Pooh kick off the parade. They dance through the streets wearing masks.

Next Mickey and Minnie along with Donald Duck and Daisy Duck, all dressed in costumes, ride on a float. 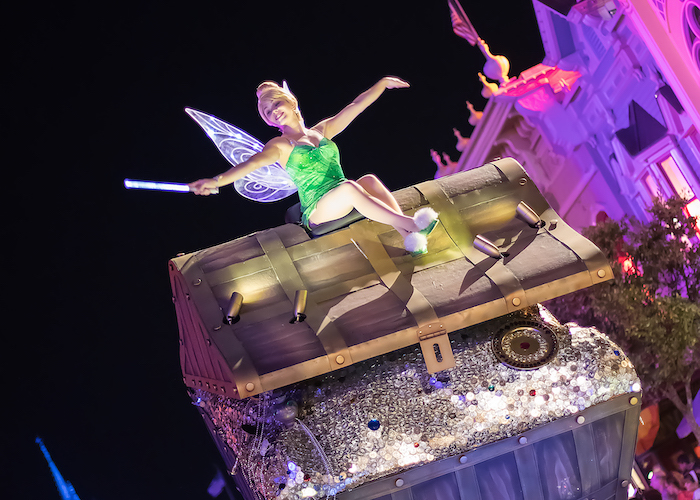 Then Peter Pan leads Wendy and the a few lost boys through the street, alongside Hook and his crew. They are followed by Tinker Bell atop a treasure chest.

Sticking with pirates theme, Captain Jack Sparrow and his crew make an appearance in the parade, riding on the Black Pearl. 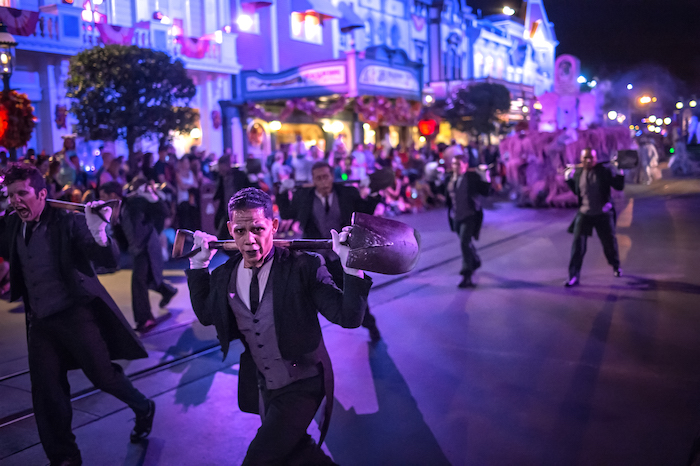 Next are the grave diggers. They dance along with their shovels. The talking gravestones from the Haunted Mansion ride in singing. 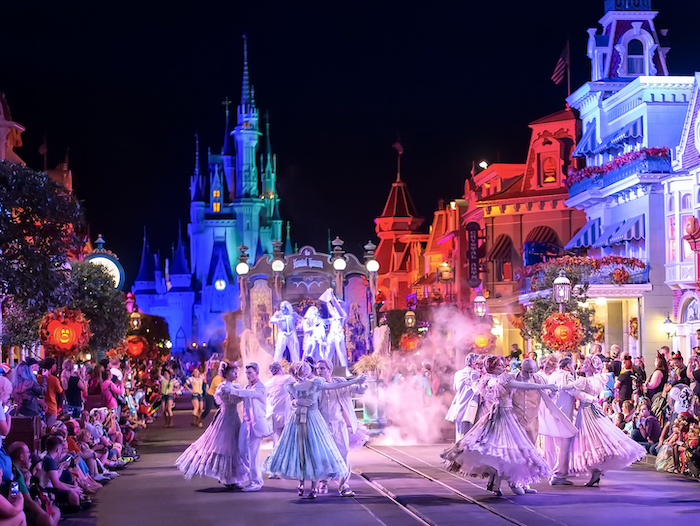 Next is Clarabelle Cow having a Halloween Hoedown, followed up by The Country Bears, dancing to the music. They’re closed off with Clara Cluck in her barn. 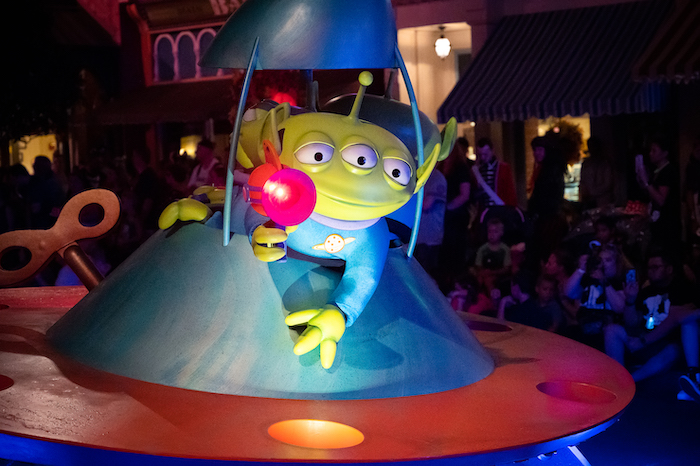 Then comes Mr. Incredible, Edna Mode, and Elastigirl, followed by some of the Toy Story Crew. The Little Green Men ride along in a UFO, and Buzz Lightyear comes behind him in his own float. 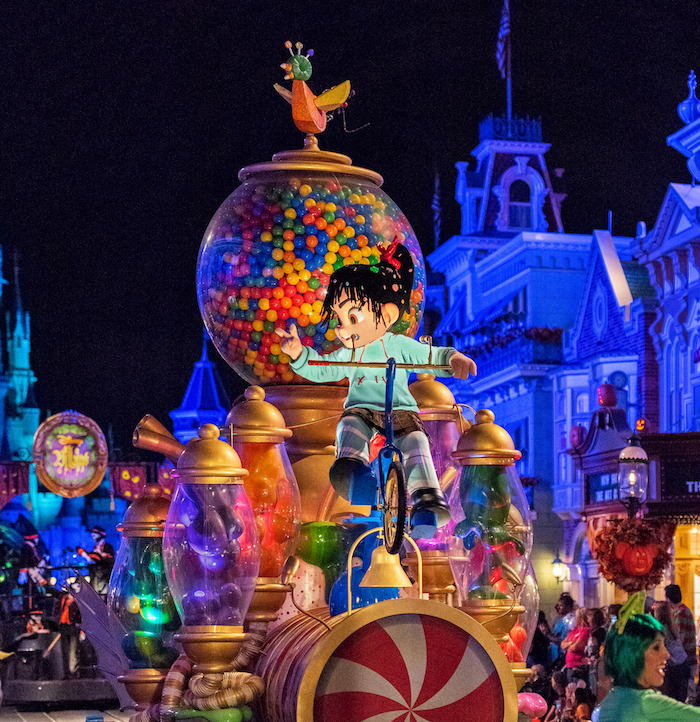 Wreck-It Ralph comes through on his float, followed up by the whole Sugar Rush Crew! Vanellope von Schweetz has her own candy-filled float at the end.

The hyenas from Lion King lead the Disney Villains into the parade, followed by their very own band. The Queen of Hearts from Alice in Wonderland, Lady Tremaine from Cinderella, Dr. Facilier from Princess and the Frog, Bowler Hat Guy from Meet the Robinsons, and The Oogie Boogie Man from Nightmare Before Christmas dance through the streets. 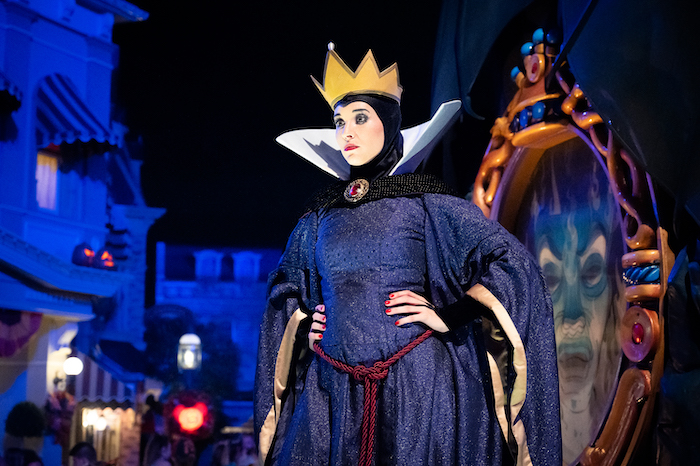 Jafar, Maleficent, and the Evil Queen (in front of her mirror) ride in on a float.

This ends the wonderful parade. 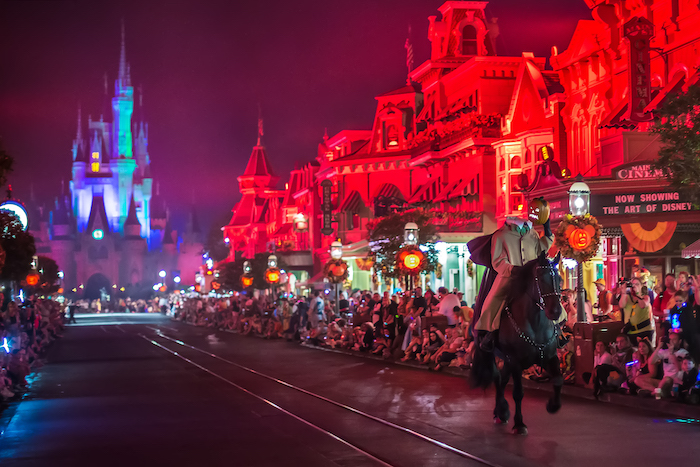 The Headless Horseman makes an appearance. Photo by Brett Svenson

Although it’s not technically part of the parade, Boo to You really gets started with the ride of the Headless Horseman through the Magic Kingdom. It’s truly haunting to hear the clip, clop of the horse as he rides down Main Street. What a way to set the mood.

Here is the video of the Boo to You Parade from The Dis.

The Boo to You Parade starts in Frontierland and makes its way to Main Street, U.S.A. You can find the route on the party map. So where is a good place to watch? If you get a spot early try Main Street. (It’s always the best place to watch a parade.) But you’ll have to stake out a place about an hour before the parade starts.

Disney’s evening parades are just pretty good and the Boo to You Parade is no exception. It’s cute. It’s funny and it’s well done. Yes, yo u have to pay extra to see it, but Mickey’s Not So Scary Halloween Party is a pretty good deal.