Is it possible to fine out when the Brazilian tour groups will be at Walt Disney World in the summer of 2013? 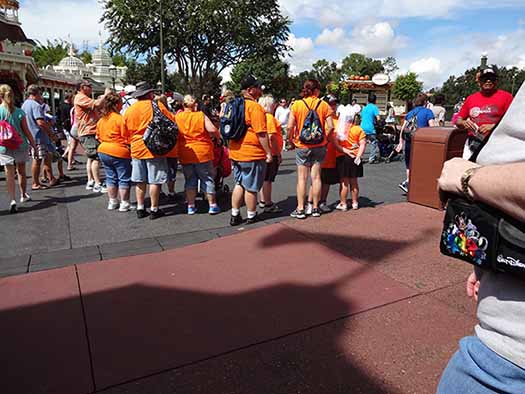 Not all tour groups are Brazilian

I know how annoying those big tour groups can be – and at Walt Disney World, sometimes they seem to be around every corner. Tour groups are a fact of life at the most magical place on earth, and unfortunately there is no real way to plan your vacation around when they might show up. If you happen to have a tour-group-free vacation, it’s nothing more than the luck of the draw.

All the time is fair game for tour groups – Brazilian or otherwise – to visit Walt Disney World, and crowds are larger in the summer than most times of the year. In fact, I don’t know if I’ve ever had a trip without encountering at least one large, rowdy group. And if the rumored new Brazil pavilion comes to EPCOT’s World Showcase, you can expect the crowds from that country to grow exponentially.

Now let’s be fair. Not all tour groups at Disney come from Brazil. Walt Disney World is one of the world’s top tourist destinations, drawing crowds from Australia, Japan, India, Argentina, Chile, Mexico, the UK, Germany, Canada, and more! The Pop Warner Football Championships and Cheerleading Competition is as American as it gets, and trust me – there are some seriously rowdy groups in the parks at that time.

Are they annoying? Sure. Do they take up whole sections of prime parade viewing locations and order 50 hotdogs at a time forcing you to wait for half an hour to get served at Casey’s Corner? Yep. Do they cause a ruckus in resort pools and hallways? You bet. But just like crowds, tour groups are necessary and believe it or not, there are things you can do to take control of the crowds!

Tour groups pose special problems to other travelers at Walt Disney World. They can get rambunctious with mob mentality, frequently leave children and teens unsupervised, and create horrible bottlenecks in attraction queues. But lucky for us, they’re usually easy to spot! Large crowds tend to wear matching t-shirts or hats, and hang out in easy to spot clusters.

If you see a tour group, be smart and flexible with your PLAN. Skip an attraction or two and visit them later, so you can get ahead of the crowds. Or, take a break to grab a box of popcorn or a Dole Whip, and let them get ahead of you. At your hotel, check out a different pool or ask for a different room if they prove too loud to let the kids get to sleep on time. Whatever you do, don’t let a tour group ruin your Perfect Vacation.

Doris, don’t worry about the Brazilian tour groups. You’ll be able to spot them a mile away and you can adjust your PLAN accordingly. You can’t plan your vacation dates around who will or won’t be there, tour groups are just a part of life at WDW.