Buzz Lightyear’s Space Ranger Spin is Dad’s favorite ride at the Magic Kingdom and probably all of Walt Disney World. From the time you walk in the door, this ride takes you into another world. Even if you haven’t seen the Toy Story movies, you can enjoy this little gem.

This ride generates lots of friendly family competition. It’s fun to see which of your family is the best shot. Dad, being a little competitive, loves to win. So Dad’s done a little research, which, of course, he didn’t share with the family, and found the targets that get the highest points. (What? You think I’m going to tell you? Maybe at the end of the page.)

Buzz himself gives you instructions about how to save the galaxy from the evil Emperor Zurg. You board the ride vehicle and shoot targets with a laser blaster. At the end of the ride everyone compares scores. May the best Space Cadet win.

“To Infinity and Beyond!” 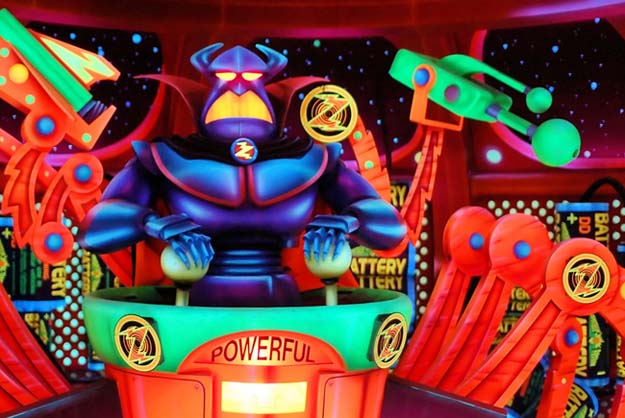 When you walk into the attraction, you are transported to another world. A world found only in the movies. A life size Buzz gives you instructions about how the galactic empire is in danger from the Evil Zurg who is stealing all of the empire’s power.

The theming in the entrance is incredible. Be sure to check out all the posters, and watch Buzz as he gives directions. His facial expressions are almost human.

The ride is based on the movie Toy Story 2. It’s about our hero Buzz who has to take on the Evil Emperor Zurg and his evil companions?

On this ride you are put right in the middle of the action. Hop aboard your XP-37 space cruiser and shoot at targets as you race (serenely) through this adventure. You can score points by hitting the Z’s located all around the attraction. (The smaller the target the more the points.) The car spins around so you can get a better shot.

At the end of the ride guest are awarded a rank from Space Cadet all the way up to Galactic Hero depending on the points you score.

When you exit Buzz Lightyear’s Space Ranger Spin, you get to find out how good you score was. The top scores from the day are displayed on a big board as you exit. You can also purchase pictures of you and your ride partner as you try to save the galaxy.

This attraction first opened at Walt Disney World on November 3, 1998. 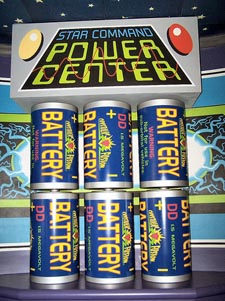 Someone always needs something. Here is a list of the nearest…

Dad has his own Toy Story Gift Shop. It’s full of Buzz Lightyear, Woody and all the toys. Grab your favorite toy and start your own “to infinity and beyond” adventure.

Somewhere along the ride, you’ll see a big flash. Guess what? You just had your picture taken. The pictures are pretty cool. Right before the gift shop you can see the pictures and even buy them. If you are part of the PhotoPass+ program, you can add them to your PhotoCD and take them home with you.

Dealing with the Crowds

Buzz Lightyear’s Space Ranger Spin is one of the most popular rides in the Magic Kingdom. Lines for this ride start early in the morning and continue until late at night. Like most of the popular rides at Walt Disney World, you will beat the crowds if you ride either early or late. You could also try during parades and fireworks.

During the busy times of the year, lines can reach up to 2 hours. This is a FASTPASS ride.

It’s a good thing to have a touring plan when you try to get through the Magic Kingdom. Dad recommends Touringplans.com for a great source of touring plans, park information and even the best, most up to the minute line information available from their smart phone app called Lines.

Buzz Lightyear’s Space Ranger Spin is Dad’s Favorite ride in all of Disney World (See Dad’s top 10 rides at Disney World.) It’s the best in all the parks. It’s where our family begins and ends our days in the Magic Kingdom.

Don’t miss this one!