“I am thinking of booking a Family Suite with my family. However, we are all grown adults, my husband and I, a 22-year-old, a 23-year-old, and a 24-year-old. We have looked at two rooms at one of the value resorts, but we would like to spend as much time together as possible. You think the pull-out couch and pull-down bed would accommodate the 20-somethings.

We don’t spend much time in the hotels when we go. We are more about the parks. This is the first time going with five instead of just four in the family.” 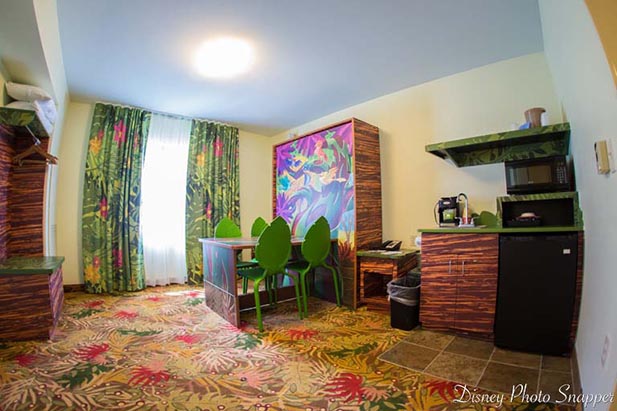 All right. First thing I would suggest, if you haven’t already made your reservation, is that you get in touch with our partners at Destinations to Travel. This is one of the things they specialize in is helping you choose a room, helping you pick which room is best for you and your family. I asked one of their agents to answer the question for you so you could see what they’re thinking.

Here’s what Chris says. “The Family Suites are, according to Disney, able to sleep six adults. Having full-grown adults in one of these rooms, however, will get a bit cramped. Family Suites at The Art of Animation Resort has a total of three beds, two of them being double-sized beds and one of them a queen bed. They could, in theory, in theory, hold six full-grown adults. The folks sharing the double-sized beds may not experience a restful night sleep. That suite does have two bathrooms, which will make getting ready in the morning much easier.

The All-Star Music resort also has Family Suites, but these Family Suites have a different bed configuration than the Art of Animation Family Suites. At All Star Music, you get a total of 4 beds, with one queen bed, one double-sized sleeper sofa, and two other twin beds (one is a chair that has a pull-out bed and the second is a sleeper Ottoman). If your family of 5 sticks with the All Start Music Family Suites, you and your husband can share the queen bed while the other 3 adults will get their own bed.

The other option would be to book two rooms at a value resort. The new renovations to The Pop Century are bringing in queen-sized bed so your family of five would have a total of four queen beds at your disposal. One of the queen beds will be one of the new, renovated Innova beds,” where it folds down out of the wall, “and the other one would be a full-sized queen bed. Since this renovation has started in the rooms furthest away from the dining hall, booking a standard room would help you land one of these renovated rooms.”

Destinations to Travel can help you get one of those more renovated rooms. Depends on when you’re going to go. If you’re going after next May, it’s not a factor because all the rooms will be done by next May.

“To sum it all up, your family of five certainly would fit into a Family Suite, but I think you would be more comfortable booking two rooms at The Pop Century. We can link your rooms in the Disney system so that they assign rooms close together. You will get a better night sleep, which always makes for a more enjoyable experience in the park the next day.”

You talk about wanting more together time. There’s no reason you can’t pile into one room and spend time together except for when it’s time to go to bed, and sometimes, families need some alone time, so it might be nice to not be stuck in the same small area, 500ish square feet, for a full week. There might be times when you want to be able to get out.

I know when we got in two rooms at The Pop Century for our family, we’ve typically gotten connecting rooms where you can open the door and go back and forth. It’s possible that you’ll get a connecting room. It depends on what time of year you’re going. If you’re going during the very busy problems, very busy season, it’s a little harder to get those connecting rooms with the door that you can open, but Disney does a really good job about putting families together. Very rarely do families get separated this long as they’re all in the same reservation or have the reservations tied together.

Dad’s bottom line, is while the Family Suites are cool and sound cool, they’re probably not best for five or six adults.