I know that this may not be considered the “right” thing to do, but wanted to ask anyways. I know that you have to purchase the dining plan for every person on the reservation. We really enjoy the sit down meals. We enjoy the appetizers offered with the deluxe plan.

However, 3 meals a day like this is way too much foot for anybody, I think. I wish that Disney would offer something similar that would be 2 sit down meals versus 3. Since they don’t, is there a way of not putting one person on the room reservation so that we wouldn’t have to purchase 4 Deluxe Dining Plans for our family of 4.

I understand that the person not listed on the hotel reservation would not get access to Extra Magic Hours and stuff like that. However, by doing this, it would allow us to have sort of a dining plan that would be appropriate for our family.

Again, I understand that it isn’t necessarily honest. However, we would only be using the dining credits that we had available and pay out of pocket for some as needed. We would still get tickets for all family members.

Thank you so much for your time and your opinion.”

I’m NOT a Fan of the Disney Dining Plan 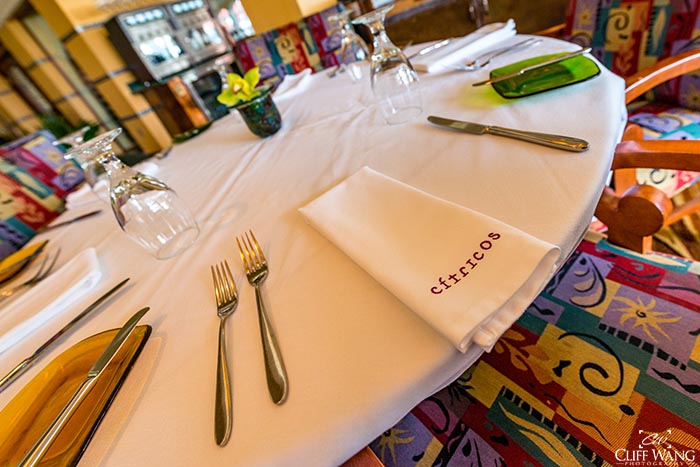 Eating every meal as something like Citricos… – Photo by Cliff Wang

First off, let me say, I am not a fan of the Disney Dining Plan. Any of them and especially the Deluxe Dining Plan.

In fact a few years ago I wrote an article called “The 11 Reasons I hate the Disney Dining Plan” One of the reasons I stated is the Deluxe Dining Plan is too much food. No one should eat 3 table service meals per day. (My opinion.) And if you don’t eat 3 table service meals per day, you’re losing money with the Deluxe Plan and spend a lot of time eating that could better be spent at the parks.

Speaking of the saving money thing, I believe that the vast majority of people that use the Disney Dining Plan don’t save money. I’ve done the math. Unless you are very careful about the restaurants you choose and what you eat at those restaurants, you won’t save anything. I’ve even devised a calculator to help you figure out if you would save.

Not a Good Idea

I really don’t think “cheating” is a good idea. Maybe I’m just too honest, but I never condone lying. I don’t think it’s a good idea, and it doesn’t set a good example for the kids. Plus lying in this case could have some expensive consequences.

While it might not happen, there’s a chance that Disney would wise up and figure out you have an extra person in your room. Then they could make you pay for the Deluxe Dining Plan for them. So now you’ve lost any savings and depending on when Disney figured it out (say the last day), you might also be out the extra money you spent on the extra meals. It could happen.

I know that you can get around the other benefits like Extra Magic Hours, but the FastPass+ thing might be a problem. Being able to schedule FastPasses at 60 days is a big deal. It’s the difference between being able to ride Seven Dwarfs Mine Train or Slinky Dog Dash, or some other big attraction with no wait versus a 2 hour wait. That’s a Big Deal.

Disney Dining Plan is NOT Designed for Guests

I would highly suggest you do the math before buying the Disney Dining Plan. My guess is if you map out where you want to eat, get the prices from those restaurants, and compare them to the Dining Plan you’ll come out ahead by paying out of pocket. Probably way ahead. You can use the calculator above to compare.

This is one I wouldn’t recommend any time not just because you might get in trouble, but because I don’t think it’s worth it. Do the math and see how it works out. I bet if you figure what it would cost even with the appetizers, you’ll come out ahead by not using the plan.

Only getting the Dining Plan for 3 when you have 4 in your party is a bad idea.