We are traveling to Orlando from New England for 15 days and would like to go to the main Disney theme parks for 12 of those days, not to the water parks. We only plan to make one trip to Orlando within the next two years, so an annual pass does not make sense for us. We are a party of two adults and two children, but they must purchase adult tickets based on Disney standards of what a child is.

Disney no longer sells 14-day tickets to US residents, and it doesn’t make financial sense for us to buy 10-day tickets and then an additional 2-day ticket. Because of the price, we would be better off going to Universal for the two days. My question is can we purchase and then use the EU 14-day ticket even though we are US residents. 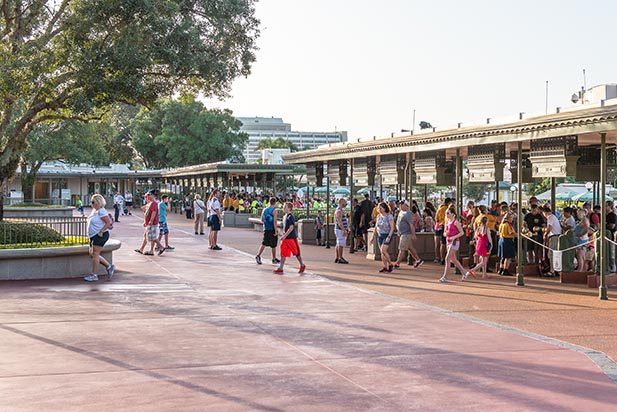 Yes, you have to have a ticket to get in here – Photo by Laurie Sapp

It’s the same thing for the EU (as you call them) tickets which are actually UK tickets. The 14-day ticket is for residents of the United Kingdom. For people in the United Kingdom, those passes are specific for them. You have to be a resident of that area to get those tickets. Somebody in the US can’t just go out and buy it; you have to prove residency to buy the tickets.

The answer is no, you really can’t. What I would suggest is that you get in touch with our partners, my buddy Patrick and his people over at the Official Ticket Center. I actually talked to Patrick yesterday. They’re right there by Disney World. They’re Disney certified to sell tickets. They are an official reseller of tickets. They’ll be able to help you save some money on your tickets, whether it’s a 10-day, whether it’s an annual pass. They’ll be able to answer any of your questions.

Oh, and The Official Ticket Center has Universal tickets too.

Dad’s Bottom Line is, no, you can’t buy a UK ticket because you don’t live in the UK. It’s just really that simple.