During the week of December 9th, what would be a better date for the Candlelight Processional, December 9th, December 12th, 13th or 14th? How important is the narrator? 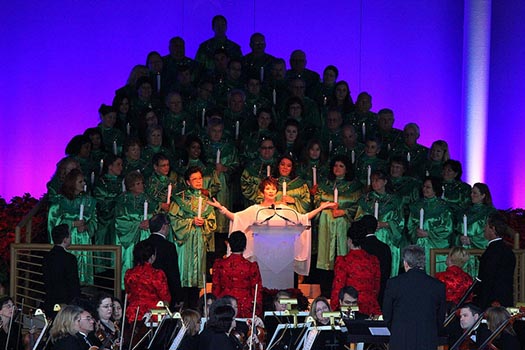 The Candlelight Processional is one of Dad’s most favorite things during Christmas at Walt Disney World. It’s a tradition for our family to schedule our trips around seeing this spectacular reading of the birth of Christ, accompanied by all the traditional music and holiday fanfare you’d expect from Disney.

While each performance is essentially the same, they are also unique! Hey Dad, I’m not sure if you’re aware, but the words “same” and “unique” are opposites! Which one is it? That’s a great point, and the answer is both!

You see, each Candlelight processional features music by a 50 piece orchestra, a 500 member choir, and the Voices of Liberty. The songs are the same each time, and the celebrity narrator reads the same piece of scripture each night.

BUT, the narrator does change about every other night. And the choir changes too, as high school and college choruses from all across the country travel to EPCOT to join in the fun! So while the songs are the same, each performance is a little different from the last!

Now, as for whether the Narrator matters – it’s really up to you. All of the Narrators are hand picked by Disney, and they all do an amazing job. Dad would be happy to see any of them perform! But, if you have a particular fondness for a certain celebrity, it might matter to you. On your dates, Jodi Benson (the voice of Ariel herself!) is narrating on December 12 and 13, and Olivia Newton John is narrating on December 14. The narrator is still TBA for December 9.

While all of the Narrators have their own unique personality and style, one really stands out as a special addition over the past several years. Marlee Matlin is often invited to narrate the Candlelight Processional, and she does an exquisite job of relaying the story in sign language (with vocal translations provided by interpreter Jack Jason).

While the particular Narrator of the evening doesn’t matter much to Dad, one thing really does matter, and that’s the Candlelight Processional Dining Packages. Each of the three nightly performances is packed to the rafters, and the best chance of getting a seat with a good view (or a seat at all for that matter) is to book a lunch or dinner package that includes preferred seating.

Candlelight Processional Dining Packages aren’t available 180 days in advance like regular reservations. Instead, they are usually announced in mid-August (keep your eye on Dad’s Blog for an announcement of when they’ll go on sale). Many of EPCOT’s Table Service restaurants participate in the package, and there are a range of price points to choose from. Book early to avoid disappointment!

Or, if you made your reservations through Dreams Come True Vacations, you could have them make the reservations for you as soon as they become available.

Scott, the day you go doesn’t matter much, and neither does the Narrator for the evening – you’re in for a treat no matter what! But do make sure you get a Candlelight Processional Dining Package so you’re sure to see the show!