So, we’ve been planning our Florida trip for weeks now! My birthday is December 31st so of course I want to be at Disney for my birthday. I’ve read any forums and I’m now terrified to go… Everyone says NOT to go at that time of the year and yet we are! Could you please give me advice on how to survive and enjoy my Disney Birthday trip? Thanks! 🙂 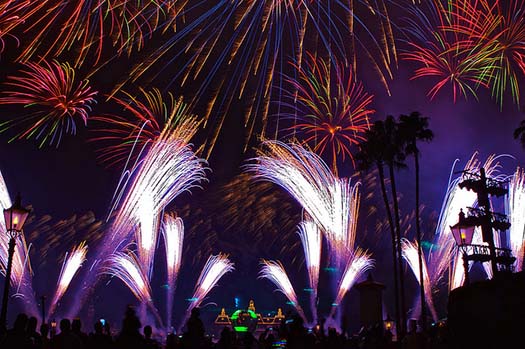 Birthdays play such an important role in so many Disney films – Sleeping Beauty and Tangled just to name a few – but unfortunately in real life, birthdays aren’t always a fairytale. Everything you’ve read is true – the end of December is the worst time to go to Walt Disney World – they crowds are beyond out of control. But, at least the weather should be cool, and it is Dad’s favorite time of year… if you have a good attitude and a great PLAN, you’ll have a wonderful birthday ringing in the New Year!

The week and a half between Christmas and New Years (with a couple of days on either end) is the busiest time at Walt Disney World. Worse than Easter, Thanksgiving, Spring Break, and the 4th of July. It is packed with people. Take a look for yourself – on Dad’s crowd calendar these days are BLACK – there will be so many people in the parks you won’t be able to move or hear yourself think.

While I haven’t been to Walt Disney World on New Year’s Eve, I have been on Christmas Day, and that was enough – never doing that again. I’ve also been on New Years Day, which was also a nightmare and led to the longest wait in line that we have ever encountered.

Dad considers himself an expert at avoiding crowds at Walt Disney World, and Dad’s tips to beat the crowds still apply, but they won’t be as effective with such high crowd levels.

To really make the most of your time, you’re going to need the best PLAN ever. The folks at TouringPlans.com can really help with this – they have detailed crowd projections to help you plan your days in advance, suggested touring plans specifically designed for peak holiday times, and a Lines App you can use in the parks to navigate the crowds. Check them out!

Luckily, at this time of year, even though there are more people in the parks there is also more to do and see. Christmas at Walt Disney World means extra shows, beautiful decorations, and impressive displays at the hotels. So when you feel like taking a break from the madness in the parks, there is still plenty to keep you busy!

On New Year’s Eve, consider taking it slow for your birthday and do something special. During the day, you might want to visit Animal Kingdom since it will be slightly less crowded than the other parks, or EPCOT because it is the most spacious.

If you want to see one of the New Years fireworks show, you will want to be in place early. Around a half a million people will try to see the shows. There are big fireworks shows in EPCOT and the Magic Kingdom. These are great shows but they draw huge crowds.

Hopefully, you already have reservations for dinner. You might still find a nice restaurant where you can get a reservation, but most will already be booked. You can make Advanced Dining Reservations for almost all of the Disney World Restaurants 180 days before you arrive.

Melissa, will you face enormous crowds on your trip? Yes. Can you make a PLAN that will help you deal with them? Yes! Will you have the most magical birthday at Walt Disney World? Yes!!! Or, at least I hope so. Do your research, make your PLAN and stick to it, and don’t say I didn’t warn you. Have a happy birthday!

PS. Dad’s birthday is the day before yours.