“Hi, Dad. We need your help. We went to Disney World every year within the first two weeks in May and had reasonable crowds. This year, we weren’t even able to book a room. Afterword, research, we see there’s a cheerleading competition the weekend before our dates and the weekend after. We will be going to the parks Monday through Friday.

“Will these competition affect park crowds? Based on yours and other crowd calendars, it doesn’t seem so. I’ve read the All-Stars and Coronado resorts will be booked by the teams. We just aren’t sure if we should change going and stay off the grounds, or if the parks are going to be extremely packed.

“Should we stay, or should we go? Thanks so much for your expertise and help.” 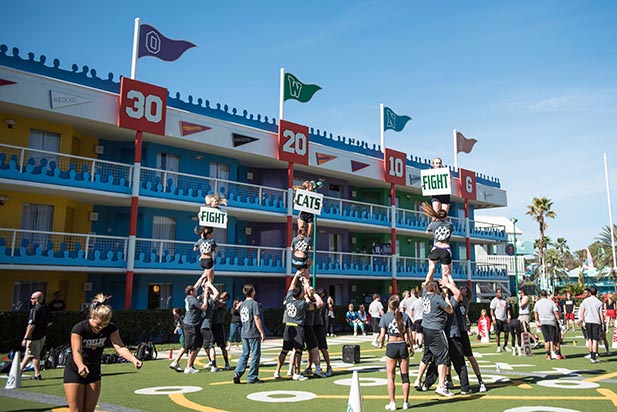 Time for Dad to sing…

OK, maybe trouble and double are a little much. But Dad sings good.

You already know what the crowds are going to be like in the parks. They will be the same as what you’ve experienced for years.

The crowds won’t to be much of a factor. This is why Disney does these competitions when they do them. It’s like the Pop Warner in December. This competition in May.

Those are slower times of the year so Disney tries to bump up the things like hotels to get more people there by bringing in these competitions.

Do they affect the parks? They can. Typically, it’s the Magic Kingdom that gets affected the most. The other parks, not so much.

There might be a day or so where some of them go to the parks, but they’re there more for the competitions.

But as to massive crowds in the parks? We don’t expect it. We haven’t seen it. They’ve done these competitions for years. Yes, sometimes in evenings it can get a little rowdy. They like to have fun, they like to celebrate a little bit. So they can be a little noisy, but it’s not bad. It’s not anything to worry about.

Go. If you go every year in May, you won’t notice anything different, because it’s just the same as it’s been every year.