I’m surprised that you rated Feb 4-10 for 2018 so high on your top 5 best weeks to visit Walt Disney World.

Mostly because Feb 7-12 of 2018 is when the Cheerleader Nationals is going on.

Did you take that into consideration when you rated these? (lol) Because my family is actually going that week, and it was a nightmare actually getting rooms at the Value resorts. (We wanted standard rooms, we ended up having to get preferred rooms because they were the only rooms available.) 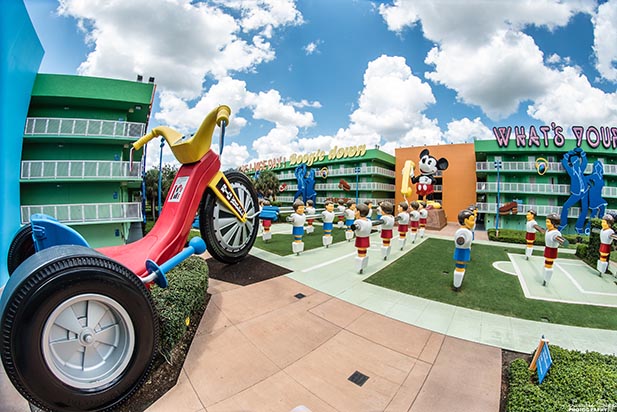 Oh, I love the Pop Century – Photo by Laurie Sapp

Bill, while I didn’t specifically look at the Cheerleader Nationals, I look at the historical crowd patterns when I do the best weeks to go to WDW, and historically, that first part of February is a really nice, slow time to go.

I also look at the events, the weather, everything going on around at that time. The Festival of the Arts, the new arts festival in EPCOT was going on that week this year, and it’s been announced that it’ll be back this year.

So you got the Festival of the Arts. You’ve got low crowds. If you look at our crowds page, see the link above, you’ll see that in my opinion, and this is what historically has happened, that that’s a fairly slow time to go.

Early February is usually, a pretty good time to visit the parks, ’cause there just really aren’t a lot of people there. The competition people are at the competitions.

And also, if you filled every room in the Value Resorts, you’d be talking about, about 20,000 people, which isn’t a lot of people. It just isn’t. The Value Resorts themselves, you could fill them up and you still wouldn’t have large crowds at Disney World. You have to fill all of the hotels up, and off-site hotels too.

So, yes, it might have been hard to get a room at the Value Resorts, but that does not mean that the crowds in the parks are going to be crazy. It’s getting to where it’s always hard to get a room in the value resorts, especially those standard rooms for the most part. Actually, the easiest time this year to get a room in the value resort, a standard room, was the summer time, which was kinda crazy, but that’s just the way it worked out this year.

Dad’s bottom line is, no, I didn’t specifically take the cheerleader competitions into consideration, but I did look at historic crowds, and the first week, that week of February, is a really good week to go, crowd wise. I hope that helps.