Christmas at Disney World! It’s the Most Wonderful Time of the Year

Who wants to celebrate Christmas at Disney World?

Dad just love the Christmas season. It’s the Most Wonderful Time of the Year, and Dads’s favorite thing ever is celebrating Christmas at Walt Disney World.

Come on, let’s see what all the hubbub is about. 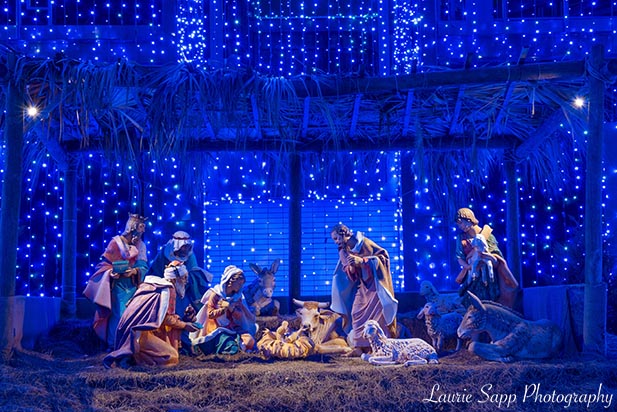 The Reason for the Season – Photo by Laurie Sapp

Uncle Walt was a huge fan of Christmas. He really wanted Christmas at the parks to be something special. In fact, the first year Disneyland opened Walt insisted that they have a special Christmas parade even though they really didn’t have the money to do a special parade.

Attendance during the Christmas season skyrocketed and the rest, as they say, is history.

Let’s fast forward to the present and take a look at what happens during Christmas at Disney World.

Christmas in the Magic Kingdom 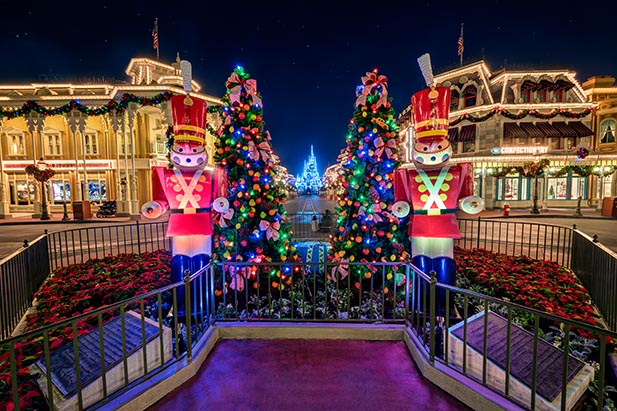 Christmas at Disney World shines in the Magic Kingdom. Literally. It shines. Every part of the park is decorated, every shop, every restaurant, every nook and every cranny. Even the Jungle Cruise gets a holiday makeover to become – get this – the JINGLE CRUISE!

But the real star of the show at Christmas is Cinderella Castle. 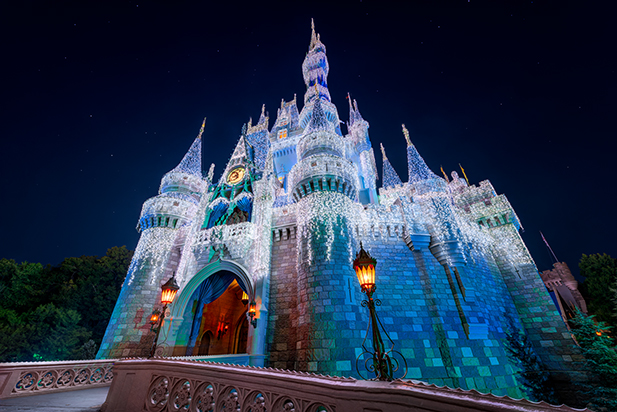 Every day during the Christmas season, right as the sun goes down, the cast from Frozen gathers and Elsa uses her magical power to transform Cinderella Castle to a Winter Wonderland of dancing icycle lights with A Frozen Holiday Wish.

What a great celebration. There are special shows including a very special parade – the Once Upon a Christmastime Parade. There is a special version of the fireworks called Holiday Wishes: Celebrate the Spirit of the Season. It’s just awesome. And it really snows on Main Street. (Sorta.) 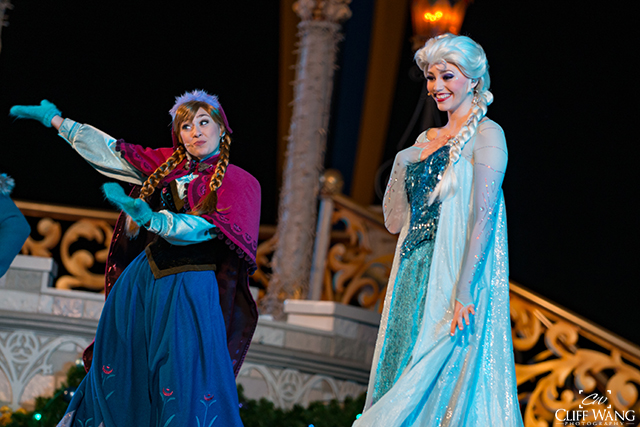 The Magic Kingdom Christmas Shows are some of the best shows of the year, anywhere. These shows range from the funny and innovative Totally Tomorrowland Christmas show in Rockettower Plaza to the heartwarming song and dance spectacular, Mickey’s Most Merriest Celebration, on the Castle stage. 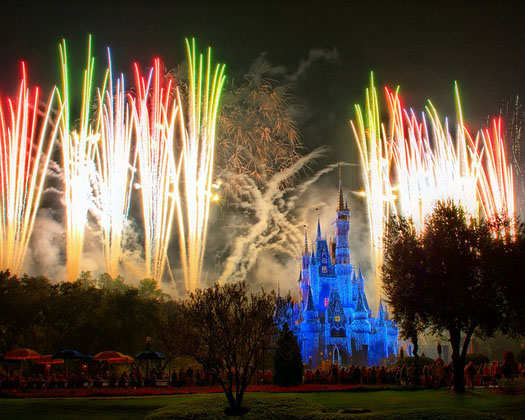 During Mickey’s Very Merry Christmas Party, a very special holiday themed fireworks show caps off the night. The show is called Holiday Wishes: Celebrate the Spirit of the Season. They’re the best fireworks of the year.

Oh, and after the last party, Holiday Wishes is shown every night through the 30th of December. 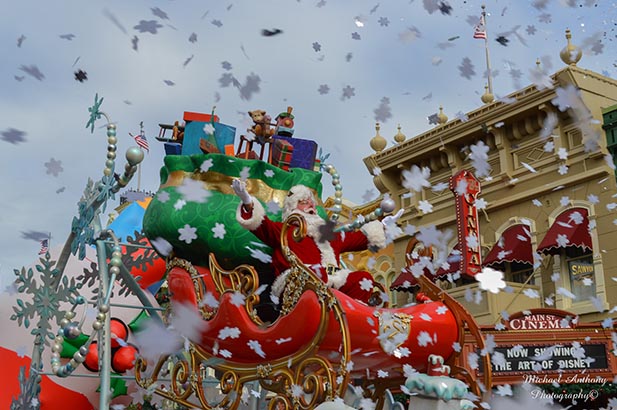 Santa rides through the snowflakes – Photo by Mike Billick

Having a parade on Christmas day just isn’t possible so they film it early, edit it, and broadcast it as a replay. You can watch it on ABC on Christmas Day. 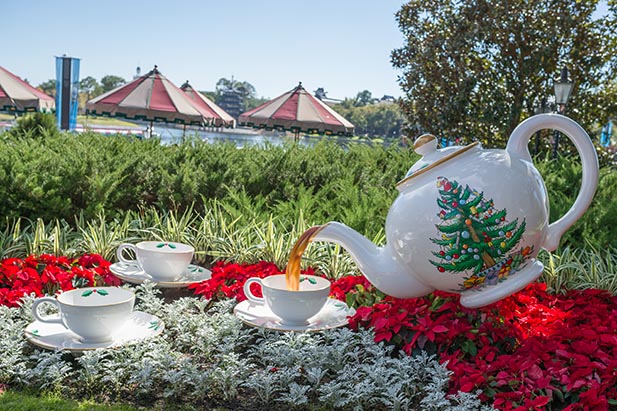 EPCOT gets all dressed up for Christmas – Photo by WDWOW

EPCOT, strangely enough, may be the most Christmasafied (yes, Dad’s making up words again) of all the theme parks.

EPCOT goes all-out for Christmas. All around the park there are decorations that highlight the special time of year. The Fountain of Nations even gets into the act. During Christmas at Disney World, the fountain in Future World dance the day and night away to great Christmas music. And just past the fountain there is a big Christmas Tree.

EPCOT calls their holiday celebration The EPCOT International Festival of the Holidays. It includes the Candlelight Processional, Joyful! A Gospel Celebration of the Season, the Holiday Kitchens, Storytellers, a special “Peace on Earth” version of IllumiNations: Reflections of Earth, and more. 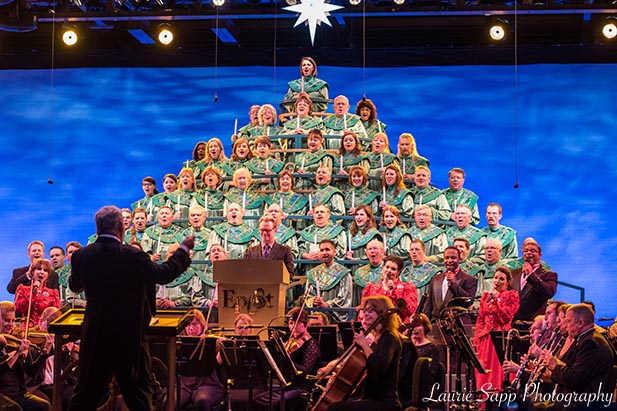 The Candlelight Processional is the best Christmas at Disney World show. The best. It’s the story of the birth of Christ told in scripture and song.

Each night, at the American Gardens Theater, a celebrity narrator reads the Gospel of Luke account of Jesus birth. Along with the story there are some of the best Christmas Songs ever written sung by a 500 voice choir with an orchestra accompaniment.

What could be better than a great show and a good meal? Duh! Reserve the Candlelight Processional Dining Package and get both plus reserved seating for the show.

The EPCOT International Festival of the Holidays 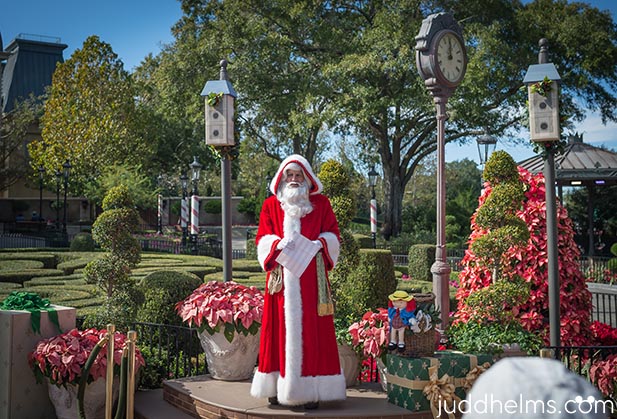 EPCOT International Festival of the Holidays is a celebration of the winter holiday season in each of the countries. In most of the pavilions there are storytellers that tell how Christmas or their special holiday is celebrated. It’s really neat.

Plus, you can be on the lookout for traditional holiday decor in the pavilions, and Holiday Kitchens featuring festive flavors from around the world. 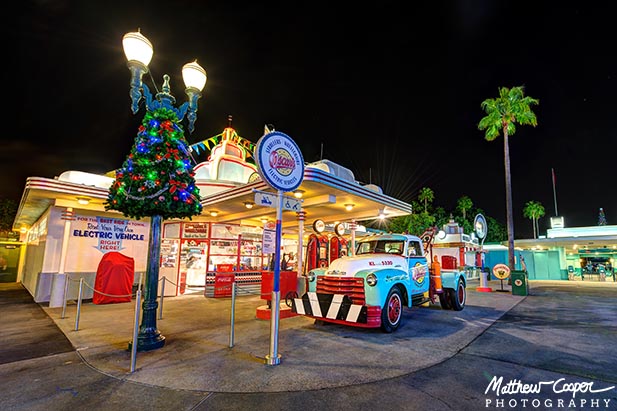 Disney’s Hollywood Studios gets all decorated up for Christmas. Unfortunately the Osborne Lights Festival of Lights show has been taken down to make room for Toy Story Land construction. But that doesn’t mean Christmas has been forgotten at the Studios.

In 2016 a new Christmas show made it’s debut. It’s called Jingle Bell, Jingle BAM! and it’s a combination of a display show on the Chinese Theatre, fireworks, special effects and even some “snow”. Oh, and of course some pretty cool music.

In 2017, a projection show called Sunset Seasons Greetings and some all-new Christmas decor in Echo Lake will be unveiled. Neat! 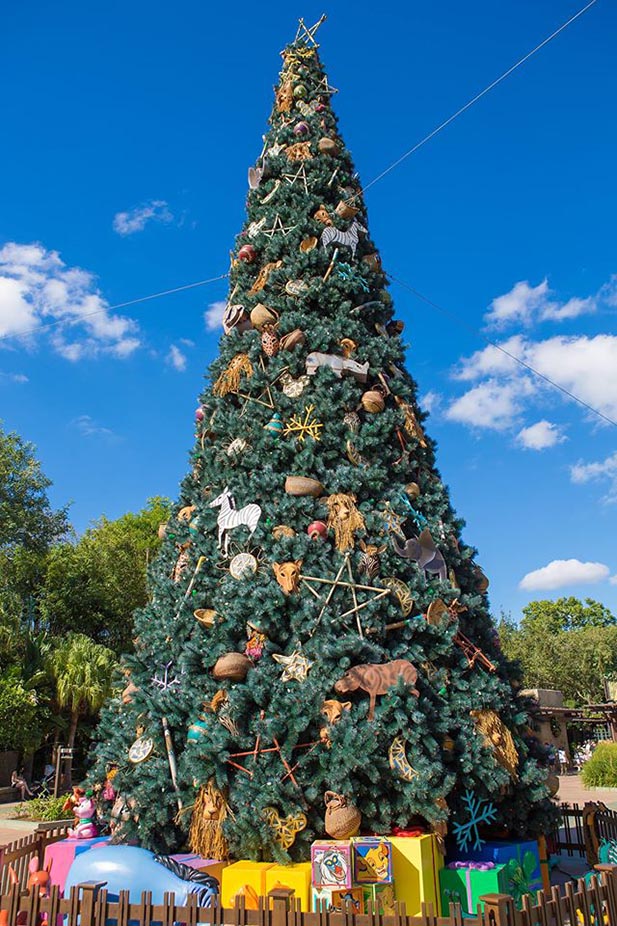 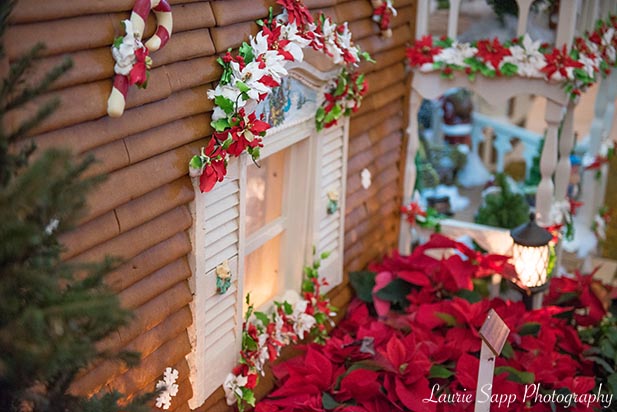 One thing that’s fun to do is to tour the Disney Resorts at Christmas. All the Resorts, even the Value Resorts, get dressed up for the holidays. Each Resort has some special holiday tradition.

The Grand Floridian has a 1,000 square foot Gingerbread House. A real Gingerbread house that’s made with over 1,000 pounds of honey. Go ahead, lick it and see what happens. (Not really.)

Big Christmas Trees decorate the lobbies of most of the resorts. Each Resorts decorations take on the personality of the theme of the Resort. At Coronado Springs the decorations are Southwest themed, at Port Orleans it’s New Orleans decorations, at the Polynesian there are island decorations.

Dad’s Disney World at Christmas in the Hotels page 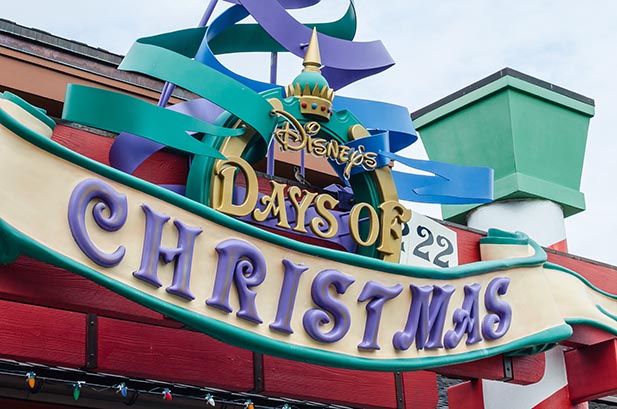 Christmas all year at Disney Springs – Photo by Cliff Wang

In 2016, there was even a cool drone show (Starbright Holidays) every night during over Lake Buena Vista. This year, you’ll find a Christmas Tree Trail with 25 trees decorated for beloved movies and characters.

After you get your picture with Santa, stroll around the shops. There is live entertainment throughout the day. Each shop goes all out with Christmas decorations and displays.

It truly is “The Most Wonderful Time of the Year…”

When is Christmas at Disney World?

Now that’s a good question. The Christmas season at Walt Disney World starts the first week of November. It takes Disney about 3 or 4 days to get all the Christmas decorations up (it’s an amazing transition) and they start putting up decorations a couple of days after Halloween. The first Mickey’s Very Merry Christmas Party usually starts the season on the first Thursday of November.

The Candlelight Processional always starts the day after Thanksgiving and runs through December 30, which ironically enough, is Dad’s Birthday.

While the official beginning of Christmas at Disney World won’t be until that first Friday in November, the first week of November decorations will be going up in the parks and the second week the hotels usually get their decorations up.

I want to go to Christmas at WDW

Do you want to see it for yourself? Sure you do. It’s easy. Just hop over to Dad’s Destinations to Travel page and let one of the great Disney Travel Planners get you started on a magical Christmas vacation. You won’t be sorry. Trust Me!

Christmas at Disney World, it’s Dad’s favorite thing. I think I could spend a week there and not ever ride a ride. I’d just walk around enjoying the decorations, in the parks, in the hotels, at Disney Springs and even checking out the Christmas Trees of WDW.