Are the Disney parks decorated for Christmas during the Thanksgiving week holidays? 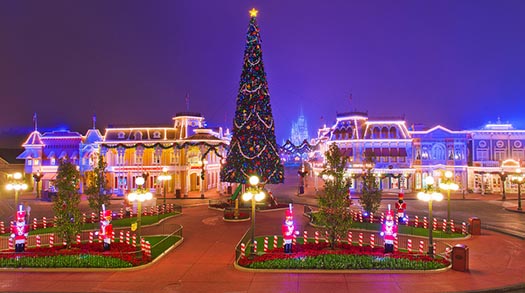 Dad’s why yes they are Answer

The short answer is yes, most of the Christmas decorations will be up at Walt Disney World the week of Thanksgiving. Most of them.

OK, now for the long answer …

The Christmas decorations go up at Disney World the first week in November. (Which by the way is a great time to visit Disney World and watch the transition from Halloween to Christmas.)

Why do I keep saying almost. There are 2 things that don’t start right when the decorations go up. One is a big deal, that’s the Candlelight Processional. It’s the story of the birth of Christ read by celebrity announcers and with great music performed by an orchestra, choir and the Voices of Liberty. This show starts on the day after Thanksgiving and runs through December 30. It’s a must see show. Don’t miss it.

The other decoration that doesn’t show up until later is the Christmas Tree in the Magic Kingdom. It stays down until after they tape the Disney Parks Christmas Day Parade. So it doesn’t go up until after the first weekend in December. You’ll miss that, but it’s not a big loss.

I remember when Walt Disney World put up the Christmas decorations the night after Thanksgiving. That was truly amazing. Now they take 3 or 4 days at the beginning of November. It’s still pretty amazing.

One thing you should probably know is the crowds Thanksgiving week are pretty big. It’s a very busy week. (Not nearly as busy as Christmas, but lots busier than the weeks that surround it.) Here’s my November Crowds page. It might help.

Louis, Thanksgiving time is a pretty nice time to visit Walt Disney World. The only drawback is the big crowds, but the parks and hotels will be all decked out and waiting for you.