I see you say that the Christmas decorations don’t go up until after Thanksgiving – does this therefore effect the decorations for Mickey’s Very Merry Christmas Party in November? 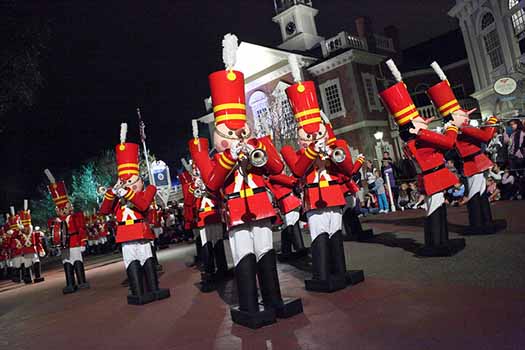 Even the parades start early – Photo by Sam Howzit

Dad’s that’s not quite right Answer

Howdy, thanks for your question about my favorite subject in the whole wide world. I just love Christmas at Disney World. It’s our favorite time of year to visit. It’s just amazing.

The Christmas decorations all start going up just after the first of November. It’s amazing to watch. It takes 3 days to transform the Magic Kingdom from Halloween to Christmas. (It’s all done at night.)

Christmas “officially” begins on the first Friday of the first full week of November. In 2013 that’s November 8 (which happens to be the date of the first Mickey’s Very Merry Christmas Party).

Now there is one big event that doesn’t start until after Thanksgiving and it’s such a major event that Mrs. Mom and I probably would wait until after Thanksgiving to visit WDW. Of course I’m talking about the Candlelight Processional. We just love the Candlelight Processional. The music, the atmosphere, the story, it’s just the best show at Disney World during Christmas.

That may be why I said something about Christmas not starting until after Thanksgiving, but it’s not because the decorations aren’t up. They are.

The first 3 weeks of November are really about the perfect time to visit Disney World. In fact, they get a pretty good mention on my top 5 weeks to visit WDW and it’s all because of the Christmas decorations and shows.

Michelle, since the decorations are all up the first week in November the Merry Christmas Party will be in full swing. Have a great time.