“Hi Dad. We have our trip coming at the end of November and our day at the Magic Kingdom is November 26. I know that night is a Mickey’s Very Merry Christmas Party Night and the park closes early, but my question is will they have the castle lit up with the lights before we have to leave so that we can see it, or do we have to go back another night when there is not a Mickey’s Very Merry Christmas Party to see the castle? Thanks.” 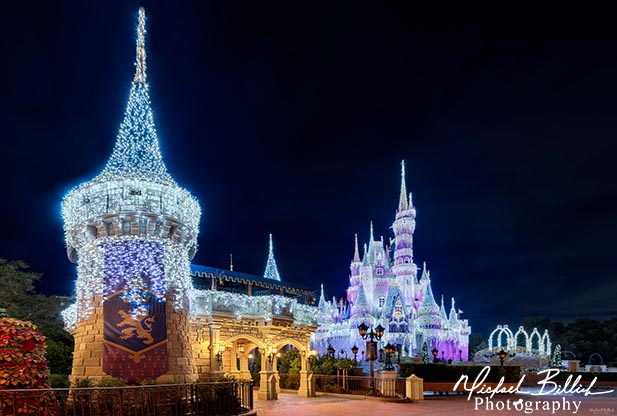 Natasha, that’s a good question. In the past it hasn’t been a factor, but this year it’s a little trickier, because Disney changed the closing time on Mickey’s Very Merry Christmas Party and on party nights. They changed the closing time to 6:00 pm instead of 7:00 pm, so it’s an hour earlier, which is a lot closer to sundown than it was before. Official sundown in November, I looked it up, is at 5:28 pm. On November 26 the official sundown time in Orlando is 5:28 pm, so the sun will be down before you have to leave the park at 6:00.

So yes, you should be able to see the castle lit up before you have to leave the park. Now leaving the park at 6:00 is kind of a misnomer. Let’s say you just happen to be back at Big Thunder Mountain Railroad right at 6:00. The cast members … If you’re in line, they’re going to let you ride it. If you’re not in line, they’re going to say, “I’m sorry, you can’t ride the ride.” Unless you have a party band you’re going to have to leave.

Are they going to chase you out and watch you walk all the way through the park? No. And if you’re like me, you’re going to stop at the Christmas Store, because I always stop at the Christmas Store on my way out. It might take me 30 minutes or 45 minutes to get out of the park by the time I hit all the shops on Main Street and maybe stop at Casey’s and grab me a hot dog on the way out.

Natasha, you won’t get to see the fireworks or the parade. Those come much later in the evening, but you should be able to see Cinderella Castle lit up.