“Hi neighbor, Chris from Edmond, OK again”, I live in Edmond, Oklahoma, “still trying to work around school breaks.” (Chris had put a question in last week or so about going Thanksgiving or Spring Break.)

“An addendum to that, Christmas decorations at Walt Disney World are my favorite. My crazy spouse thinks we should brave the insanity of Christmas at Walt Disney World. I’m terrified to spend all that money and the trip be ruined by insane crowds so I’m debating on a week and a half trip starting December 20th. Should I talk him out of it?

Can you suggest a strategy to deal with these crowds and to be able to get some rides in one to two hour waits? Thanks.”

The second question is from Linda. She says,

“Hi Dad, as a teacher I have no choice but to visit Disney during typical vacation times. Normally this isn’t a problem at all. We’ve been three times in the past three years. Fourth of July, April vacation week and the first two weeks of August and had some times of our lives.

The problem is I really want to spend one Christmas at Disney, but that means it will be ridiculous crowds. By the way, it will be a surprise vacation for my eight year olds. I’ve already booked vacations for 2017 through Disney but I keep second guessing myself, is it worth going? Thanks so much for your advice.” 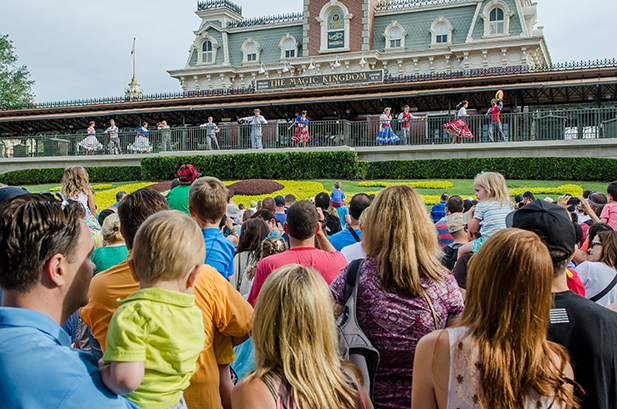 Crowds like this drive me nuts – Photo by Laurie Sapp

In fact just this week I’ve been listening to, the Voices of Liberty have a group that have been singing a song and it’s been going through my head.

Boy that guy can sing. The group is called Voctave, like octave , V-O-C-A-T-V-E, Voctave. It’s the group with the Voices of Liberty. The guy singing that is the guy that wrote the song Mary Did You Know? Great voice, I’m so jealous. He can hold a note forever.

See to Mary Did You Know from Voctave

It’s magic to be at Disney World. That’s the big thing. Will it be difficult? Sure. Will there be a lot of people there? Sure. Make it fun. Play with the people, learn, get to know people, have fun with people. While you’re in line get to know people. Are there ways to get around the crowds even at Christmas? Yeah. I’m writing a book, talked about it last week. Here’s the book. In the book we’ve got Dad’s rules for conquering the theme parks.

There are three rules.

Number one, get to the parks early. That first four hours in the morning is essential. A few years ago the New York Times did a story about how many rides an average guest can do at Disney World. It was nine. The average visitor to Disney World at that time did nine rides. That’s just stupid. I think you can do nine, I think you can do nine rides by noon, in fact I’ve done it.

My assistant Stephanie, she was just there last month and she did nine rides by 10 o’clock in the morning. If you do it right you can get nine rides done in the morning because that’s when the crowds are lowest. You get to the parks early, rule number one.

Rule number three is learn to use FastPass. FastPass is a great tool. Three rides without a line a day to start with, three rides. In the big parks that’s big. In all the parks but the Magic Kingdom that’s a big deal because there are only three or four or five, three or four rides that you really need that for in Hollywood Studios, in EPCOT, in Animal Kingdom.

Really only three or four rides that you really have to worry about having a FastPass for. Most of the other rides, except during Christmas, I’ll Christmas is a different situation. Except during Christmas three rides is enough to get the parks. The Magic Kingdom if you can get your three priority rides and get FastPasses for them, get there early, boom you’ve got it done.

The last thing, the third rule. Yeah I can’t count very well, I think I had four. The third rule is to ride the busy rides first. When you’re there during those low times of crowds in the morning you ride the busier rides. What rides are going to be busy?

When you first get there run to, say in the Magic Kingdom if you are planning to ride say Seven Dwarfs Mine Train, go do that first. If you didn’t get a FastPass for it, go do that first. Whatever you didn’t get a FastPass for, those busiest rides ride them first as soon as you get in the parks, first thing in the morning. That’s the way you get around the lines at Disney World. It’s that simple.

Will Disney be busy that week? Sure. Alternative, let me give you an alternative. This goes back Chris to what I talked about in your post last week. The alternative is Thanksgiving week.

If you come in the 20th I think you said, coming in the 20th crowds won’t be bad until about the 23rd, 24th, then they’ll get crazy. They’ll be crazy through the end of the year. The first few days do the big ride, do the big stuff while the crowds are low and building.

The bottom line is Christmas, yes crazy, it can work. Thanksgiving, better option.