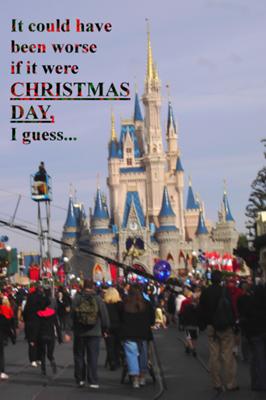 Long story short, I went to the Magic Kingdom one December day last year. Little did I know that ABC was there, shooting the special that day! I saw not only cameras, but throngs of crowds. By the time I reached Frontierland, I saw an hour wait for Big Thunder Mountain Railroad. I didn't mind it and went there anyway. On the bright side, I saw a few Disney Characters and the Jonas Brothers!

Fortunately, it was not as bad as that one time I went to the MK on Christmas Day '96!

With my lesson learned, put yourself in your shoes. Would the MK be crazy on the days when ABC tapes the Disney Parks Christmas Day Parade? How would it affect lines for the rides? Would you avoid the park on those days?

Dad's not crazy but Answer

Thanks for coming back. Love the picture.

No ranting today, unless I get to talking about Mariah Carey, I just love that girls voice. (Yes, that's relevant, she's rumored to be performing this year.)

Part of me says that you could probably find the crowds during the Disney Parks Christmas Day Parade taping pretty light, at least away from the taping. I'd imagine that the taping actually will draw some of the crowd away, and during taping all the extras will be occupied.

The problem is, whenever taping is done, all of those extras are now in the park, for free and free to do whatever they want.

If it were me, and I was wanting to maximize my touring time, I'd go somewhere else. However, just once, I might watch how the create the parade for TV. I love that kind of stuff, I just don't have the patience for it.

PS. We also had a Christmas Day Disaster one year. So now Dad goes to Universal, it's a ghost town.