by Lauren Herrera
(Fort Worth, Texas)

This question from Lauren in Fort Worth.

My husband and I would like to plan a vacation and our girls ages 8 and 2. We have no idea where to begin and are quite overwhelmed with information that others have shared with us. In addition we are both educators who can’t typically go during off season times. What are your suggestions, discounts, FastPasses, dining plans? 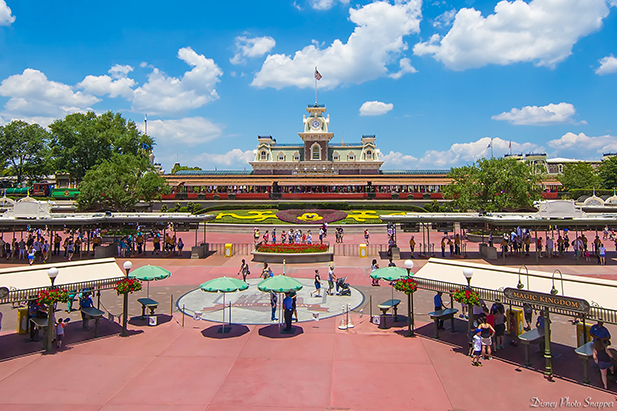 Lauren, before you know it, you will be right here… – Photo by Brett Svenson

“Hang on, help is on its way. I’ll be there as fast as I can.” (Music from the Little River Band.)

Yeah, that’s right. Help is on its way. Dad is here. This is my specialty, helping people who are having problems, who are overwhelmed. I know there’s a ton of information out there and you know what not all of it is good. People will tell you bad things. People go, things happen, and they’re all excited about it. Guess what not all the time does everything work the same way.

There’s only one opinion that matters in this whole thing. That’s your opinion. You’re the one going to Disney World, so first and foremost, just plug your ears, figure out who you’re going to listen to and listen to that person.

Okay, so let me see. Let’s start here. There’s one thing that you have to remember about you’re Disney World Vacation. I call it my one big truth. One Big Truth.

First, is pick a time to go. When are you going to go? I mean, your options are fairly limited.

Right now Disney has moved the crowds around where summer is not a terrible time to go. Used to be if somebody said they’re were going to go in the summer you’d say, “no, the crowds are terrible.” Well, even the Fourth of July. There were weeks in October that were busier than the week of the Fourth of July. Summer is not that terrible of a time to go. Especially if you go right after school is out or right before school starts. The later in August you can go the lower the crowd levels.

Now, August is fiery hot. It’s really hot. If you have a fall break in November that’s a pretty good time to go. October not so much. The week of Thanksgiving believe it or not is not terrible if you can go the Friday before Thanksgiving and stay for a few days. Those first few days before Thanksgiving, Friday, Saturday, Sunday, Monday, Tuesday crowds aren’t terrible. They get really big Wednesday, Thursday, Friday and then they go back down over the weekend. Christmas, it depends on when you get out for Christmas. If you’re out the 18th, around the 18th depending on when Christmas is, if you’re out around the 18th … we used to go on the 18th.

I remember that date very clearly because it’s The Princesses birthday. We used to go on her birthday and stay for a few days around her birthday. There are times you can go when crowds aren’t too bad. That’s the first thing is find when you’re going to go.

Pretty simple. Yes, there are 25 Disney hotels on Disney’s property. You could probably lop off all but four or five of them. Just right off the bat. You’d probably being teachers, you’re probably not going to stay at the Polynesian just the facts. $600 a night, that’s probably not in your budget, I would guess. You’re probably going to end up somewhere like the Pop Century. The Pop Century, that’s dad’s favorite hotel. Second favorite hotel. That’s Dad’s home away from home at Disney. I can’t afford the Polynesian anymore, so I stay at the Pop Century.

You might look at the Pop Century. All you’ve got to do is pick a hotel. You might even stay off site, save a little money. You’ve got to be careful there because you’ve got parking if you’re driving, if you got a car, Disney will transport you if you stay on site. Second place thing to do is decide where to stay.