Dad’s 5 favorite things at Mickey’s Not So Scary Halloween Party. Mmmm… This sounds like fun. 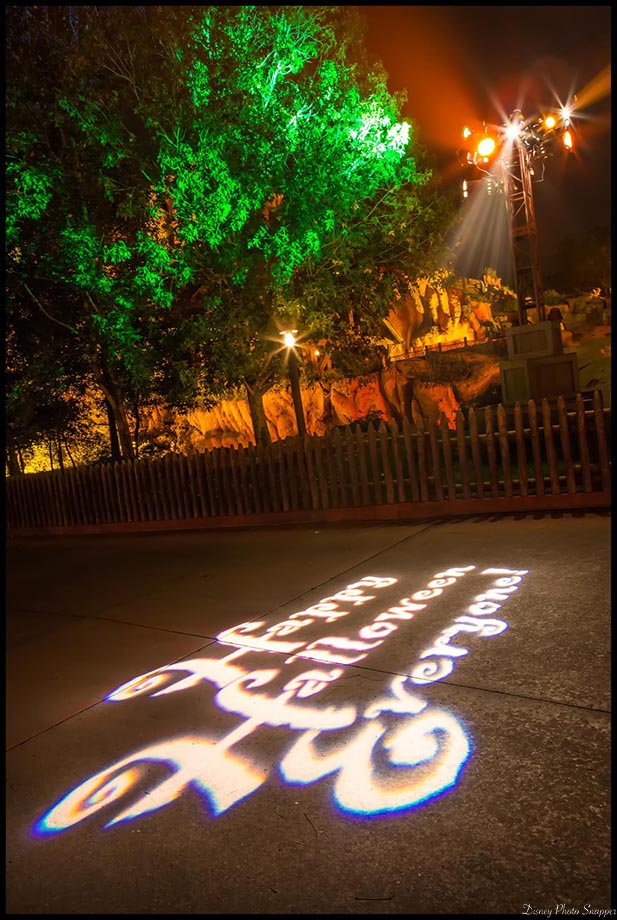 Even the walking trails are spookier – Photo by Brett Svenson 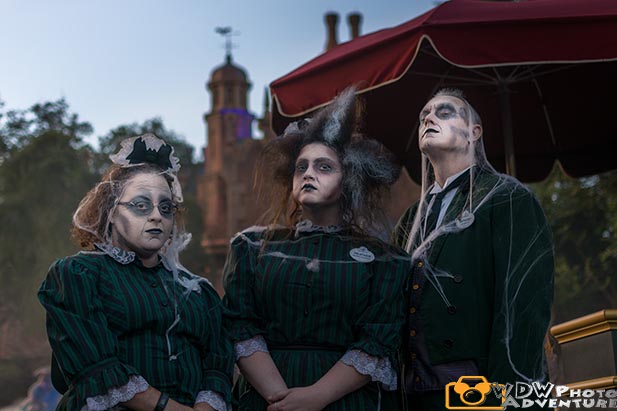 Now those are some costumes – Photo by Wayne Wood

So, what are my five favorite things at Mickey’s Not So Scary Halloween Party? Well, the first one is just kind of the atmosphere. You heard that spooky music that is playing all around the Magic Kingdom all night long, and the Haunted Mansion.

The second thing I love about Halloween party is it’s pretty much the only time that everyone can dress up in costumes. Now you’ll see kids, little girls that have been Bibbidi Bobbidi Boutique, kids that have been to the Pirate’s League get all pirated up and be pirates in the parks almost every day. 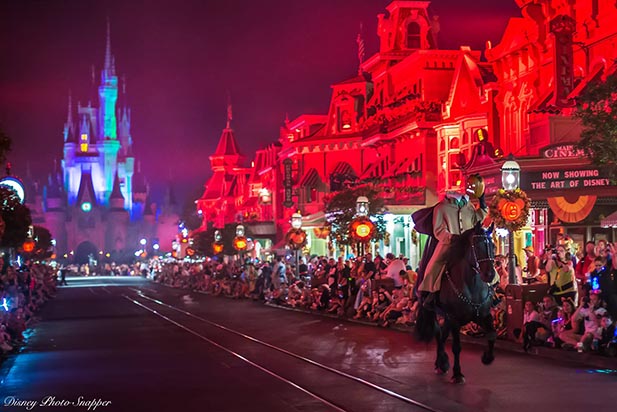 The third thing I really love, and this is kind of a new thing. This has only been going on three or four years is the Headless Horsemen riding through the park. About 20 minutes before the parade starts the headless horseman rides. Starts at the back and rides all the way through the park down Main Street. It just gets so quiet. Everybody gets really quiet, and it’s so spooky.

The Boo to You Parade 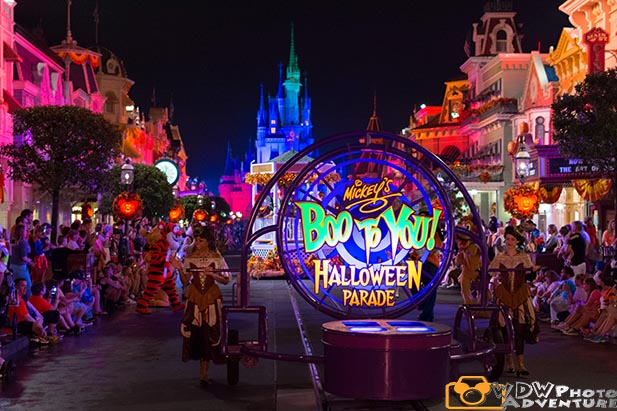 It begins… – Photo by Wayne Wood

The fourth, my favorite parade of all the parades at Walt Disney World has to be the Boo To You Parade. The grave diggers … I mean it’s just I like … Maybe the Christmas parade is even better, but I really do like, I love the music that Disney has come up with for the Halloween party. The Boo to You song, get the Hallowishes in just a minute, but all of that is just so special. The Halloween parade I think is just fabulous. 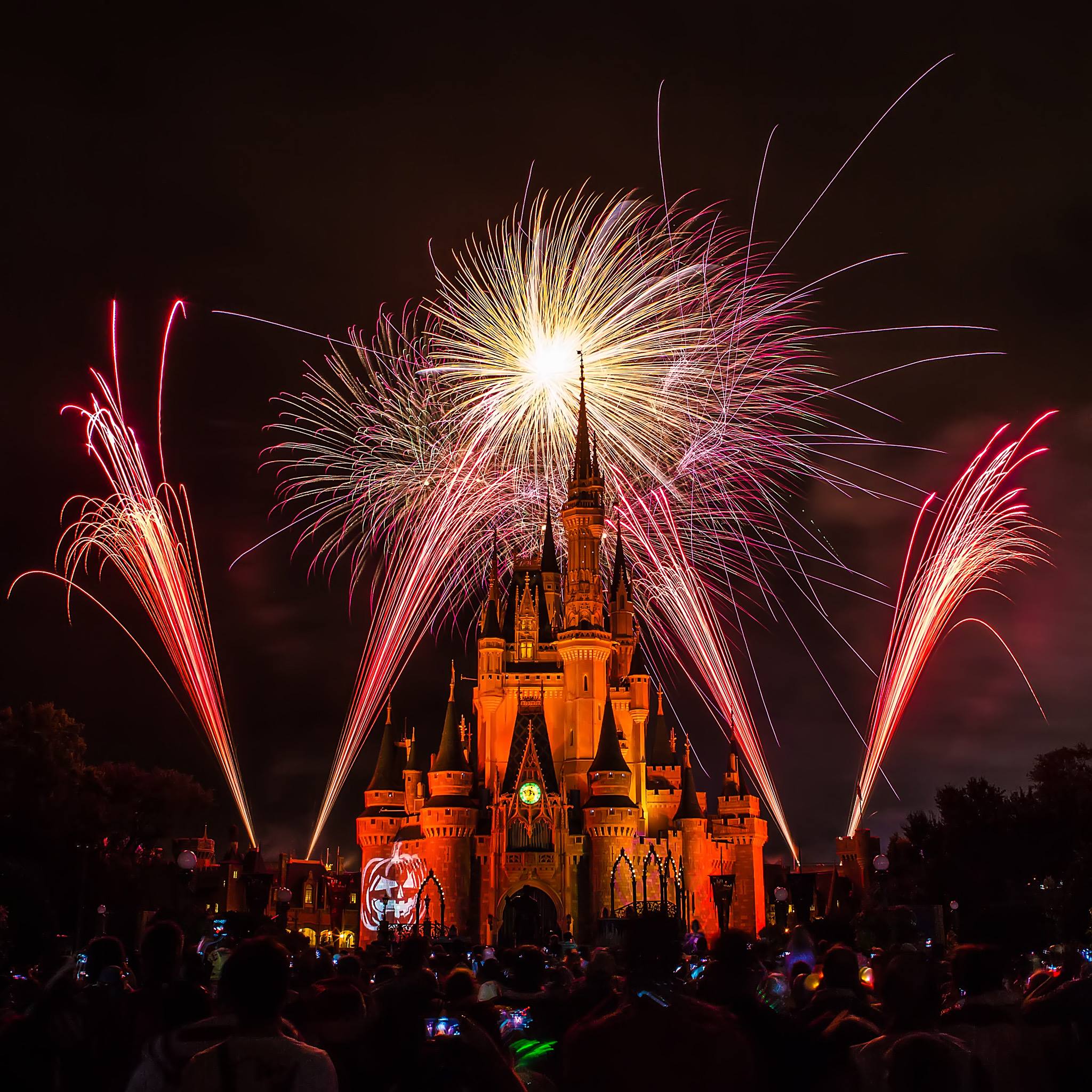 Then there’s the last thing that I love about Mickey’s Not So Scary Halloween Party. That is Hallowishes. Happy Hallowishes!

Happy Hallowishes is pretty much my favorite part of the whole party is Mickey’s Not So Scary Halloween Party. I think that’s just, I think it is the best show, the best fireworks show that Disney does.

Now I was a big fan of Wishes. I’m a big fan of the holiday version of Illuminations, and I like the Christmas fireworks. I like those green and red fireworks going on all around the Magic Kingdom, but when it comes to my favorite fireworks show it has to be Hallowishes.

I bet I sneak over one night this next week and watch it. It’s just pretty cool. We’re not going to the party, but I think we’re close enough on one of the party nights that I might be able to sneak over and watch it from like the Polynesian, which I love to do.

Those are my five favorite things to do at Mickey’s Not So Scary Halloween Party. I love the spooky atmosphere. I love watching everybody all dressed up in costume. I love that Headless Horseman, the Boo to You parade, and the Happy Hallowishes fireworks show.