On the first night of our Disney Cruise in January we at dinner in Animators Palate. I think Animators Palate my be the most interesting restaurant I’ve ever eaten in. So here is Dad’s review of Animator’s Palate.

So the first thing you need to know is you don’t get to just show up at Animator’s Palate. There is a dining rotation. There are 3 main restaurants on a Disney Cruise. You are given a dining rotation that has you in a different restaurant each night. For example, our rotation on the Dream was Animator’s Palate, Enchanted Garden and Royal Palace. You keep that rotation no matter how long the cruise is. 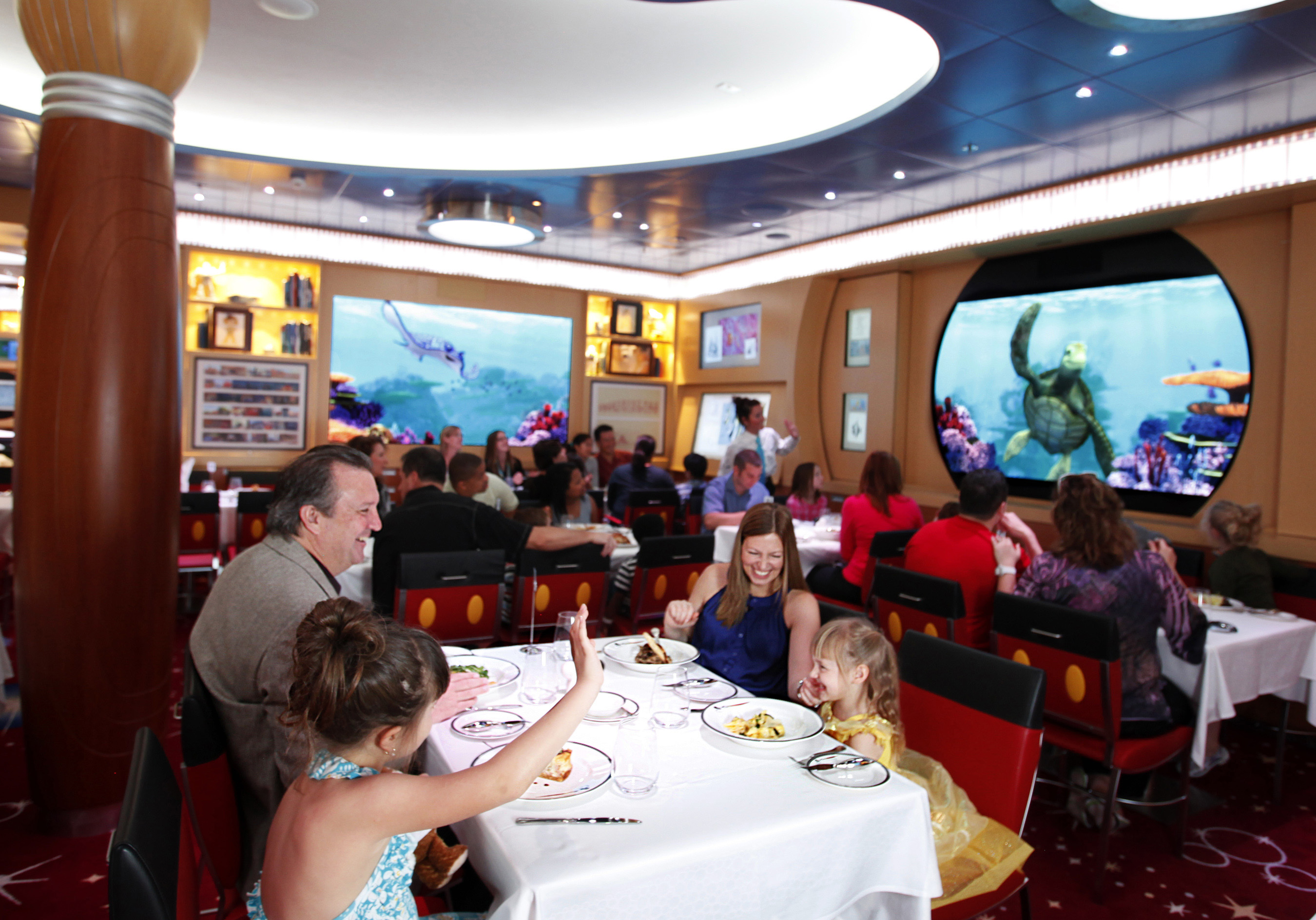 The entrance sets the tone. Photo courtesy of Disney

It just worked out that ours was Animator’s Palate first. That’s a great way to start a Disney cruise, eating at Animator’s Palate the first night. Animator’s Palate is just a really, really interesting restaurant. You walk in and it’s bright and colorful. OK, at least on the Dream and Fantasy it’s colorful when you walk in. On the Magic and Wonder it’s all white and changes colors as the meal goes on.

The first thing you notice is there are TVs all over the place, and that’s what makes Animator’s Palate just so cool. There are a bunch of different shows that play on the TVs on different nights on different ships, but every time Dad’s on a Disney Cruise, he’s seen the show with Crush from Finding Nemo. Cool, dude.

So, if like Dad you’re there to see the Crush show, you’ll notice it’s really cute and Finding Nemo themed on the TV with sea scenes and such. Throughout dinner, those TV screens where Crush and the characters from Finding Nemo make appearances. Crush even interacts to people at the tables. It’s totally righteous, Dude! 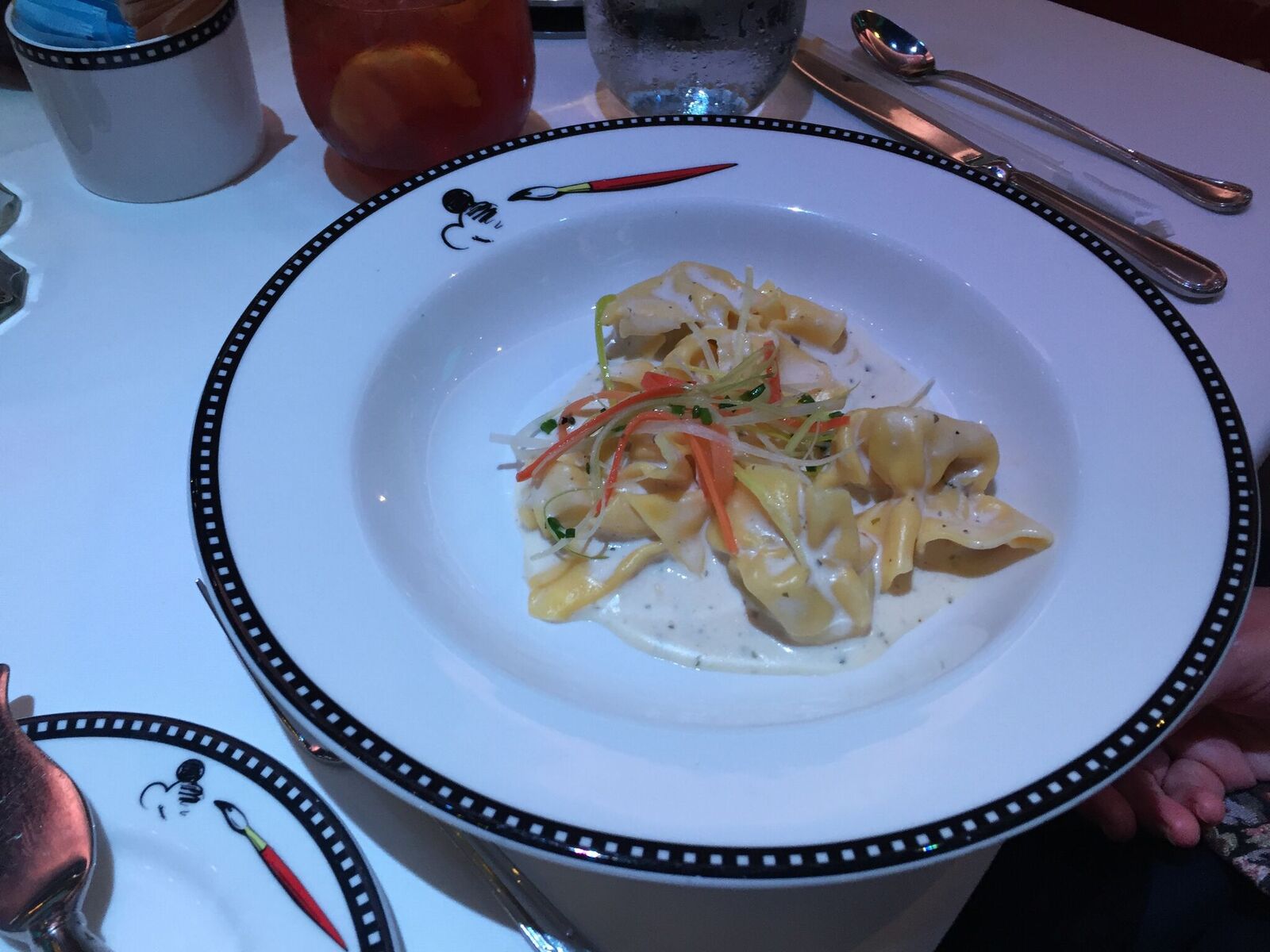 So if you’re talking about a restaurant, you’ve gotta talk about the food. Animator’s Palate doesn’t have a particular theme like Italian or French. When you look at the appetizers you’d think you’re in for a very fancy meal. Smoked Salmon Tartare, Black Truffle Pursiettes, Sliced Serrano Ham, Tomato Tarte with glazed goat cheese. Mmmm. Not off to a good start for Dad (but Mrs. Mom loves the Pursiettes).

But then you get down to the entrees. Now we’re getting somewhere. I’m a happy camper because there’s pork chop, there’s beef tenderloin, there’s chicken breast, there’s tuna steak. Those are some choices that I can sink my teeth into. When we were there last time, Mrs. Mom, she chose the beef tenderloin, and because I didn’t want to choose the same thing as her, I chose the chicken breast. I would’ve normally chosen the pork chop, but I did that when we were on the Magic a year, in 2016, and really wasn’t a fan of the pork chop, the way they did it on the Magic. So I skipped the pork and went with the chicken.

So we placed our orders, we waited for our food, We ordered, food started arriving. Bread first. You can’t say enough about the breads on a Disney Cruise. They are served at every meal and are just really, really good. Really good.

Then Crush came around and started teasing the Big Fat Panda guy who happened to be dining there that night also. That was the best part of the night.

So finally the food came and it was just good, flat good. That chicken breast was awesome. You know, you’re in a fancy restaurant, you’re not supposed to eat with your hands, right? You’re sup-posed to eat with your fork and knife, but I gotta tell you, after I cleaned everything off with my fork and knife that I could get, I picked it up and started getting the rest of it. I’d have eaten the bones if I could’ve. It was really, really good, everything we had. Mrs. Mom loved her dinner too. I mean, we almost literally licked our plates clean. They were that good.

Now it’s time for dessert. I ordered the Chocolate Fudge cheesecake and Mrs. Mom ordered the Walnut cake. The desserts were just so so. That was kind of true of the whole cruise in the main dining rooms. They were good, just didn’t knock our socks off.

All right, so service. Service on the Disney, in the restaurants on the Disney ships is really good, really good. The servers you have the first night follow you in the rotation. So you have the same servers through the whole cruise. So we had our service team, and from night one they did a great job.

The thing that sets Animator’s Palate apart from other restaurants is the entertainment. During the nights with the Crush show, the Finding Nemo decor is pretty special. The TV’s have sea life swimming by all the time. The Moonfish are always coming on and building a picture of something and you have to guess what it is. All the regulars show up. Squirt, Dory and even Nemo. It makes for a really interesting evening and really keeps the kids engaged.

Crush puts on a Totally Righteous performance. You’ll be saying Dude all night long. He would swim by every 30 minutes or so, and come up and do a little bit where he talked to people at the table. It’s like Turtle Talk with Crush at EPCOT. It’s the same kind of technology. Crush is interactive, talking back and forth.

The Bottom Line is Animator’s Palate is my favorite of the main dining rooms on the Disney Cruise Ships. I give it 4 stars on Dad’s Dining Dining Dish ratings.

I could go for another of those chicken breasts right now.