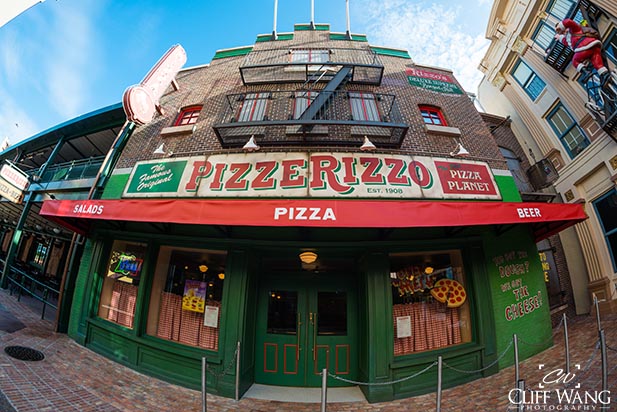 Now, we’ve always been big fans of Toy Story Pizza Planet, so I decided I’d go try out PizzeRizzo and see what it was like. You know, dark sunglasses, big trench coat, I had my big old secret mission camera on, and I had my greasy notebook all ready to go… Or not. So off I went into PizzeRizzo.

Not much had changed

So, in fact, when we heard that Toy Story Pizza Planet was gonna close, I sent a text to the family. I said, “It’s closing,” and they all cried. Not really, but we were all kind of sad when it was closing. So now you know why I was kind of nervous about eating at PizzeRizzo. So, when I went in, I noticed. I looked around, because that’s what I do. That’s why I’m “Dad”. I notice things. I noticed that it was not changed a whole lot. 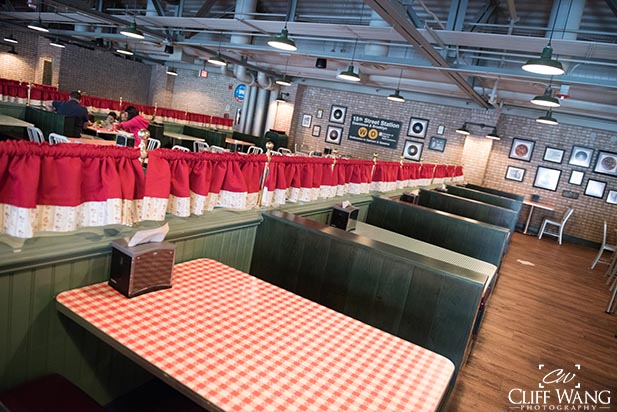 Not much has changed – Photo by Cliff Wang

The menu for PizzeRizzo

The meal comes with a Caesar salad. I’m not much on Caesar salads, and this one was kinda bland. Give me a good salad with tomatoes and ranch dressing and I’ll be a lot happier, but it was okay. The price, though, for a meal at Toy Story Pizza Planet is really, really for a Disney quick service, for as much food as you get, $10.69 for a pizza and salad, that’s a good deal for Disney. That is a good deal for a fairly healthy portions a pretty good deal.

I give it 3 stars

Overall, I liked PizzeRizzo. I was sad that the games were gone, but I’d give it a three out of five on my Dad’s Disney Dish.

Oh, I almost forgot, my assistant, Tatiana, told us this story. She said she went there last year and was trying PizzeRizzo out and went up and they had already ordered. They sat down. She went back to get some water.

She said, “I need three glasses of water,” and the counter attendant says, “Hang on just a minute. I’ve got to go in the back and get them.” So, in a couple of minutes, the attendant comes out with two cups of water on a tray. And right as she goes to hand them to Tatiana, my assistant, the server trips and throws the water on Tatiana. And Tatiana ducked and screamed, “Ahh!”

Well, it turns out there was confetti in the cups and there wasn’t really water. It was a joke, and they did was say, “Wacka wacka!” Just like Fozzy Bear would do. It’s kind of the shtick and it’s the really cool thing about PizzeRizzo is that they go with the shtick. The Muppets theme and the Muppet shtick, but it was probably pretty cool. They oughta do more of that. That was pretty good. They had to put Fozzy in there.

Have you eaten at PizzeRizzo yet? What did you think? Tell us below in the comments.