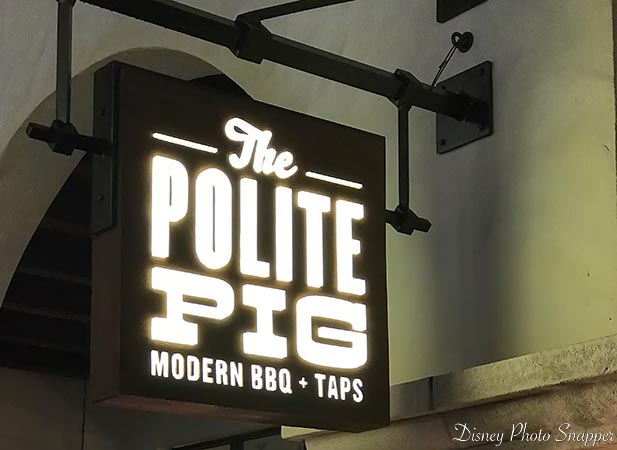 Yep, this is the right place – Photo by Brett Svenson

I was headed to Walt Disney World for the second leg of the “Secret Mission” to scout out the construction at Toy Story Land. A couple of weeks before I asked over in the Facebook group where I should eat dinner and the Polite Pig in Disney Springs was the choice.

Mmmm, barbecue, or as we call it in Oklahoma, BBQ. Sounded good, but a little scary.

So here is my review of the Polite Pig. 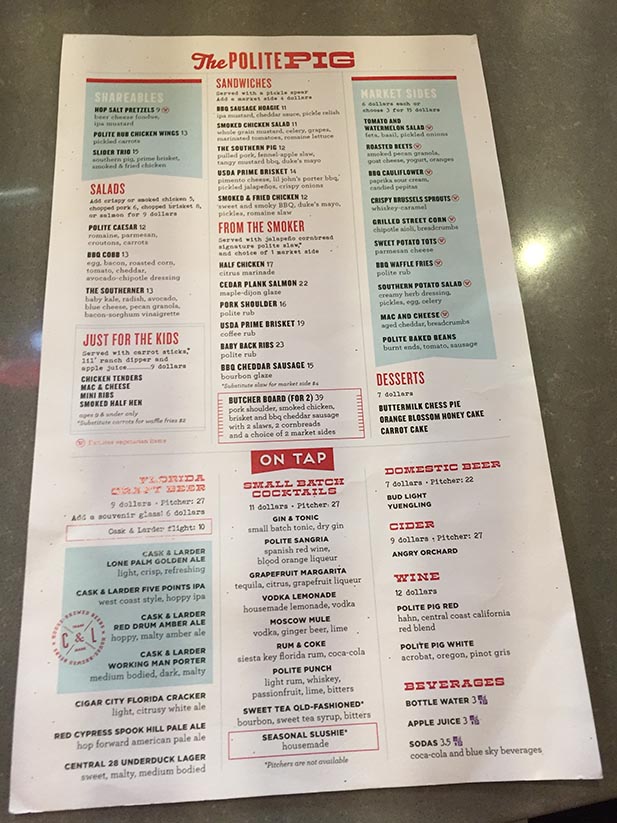 The Menu – Photo by Dad

When it comes to barbecue I’m kind of a picky guy. I like southern barbecue. Here in Oklahoma, our barbecue is tangy, sweet sauce that’s not too spicy with perfectly rubbed meats that have been smoked typically in hickory or something like that.

Going to The Polite Pig and looking at what they offered, Maple-dijon glaze, Coffee-rub, Burbon-glaze, Polite rub, woah. I’m not so sure about this but I was committed. Even Mrs. Mom said “that just doesn’t look like anything you’re going to like.” 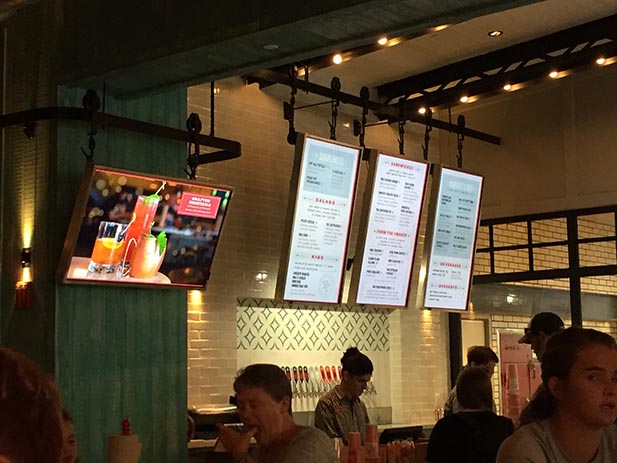 When I got to Disney Springs, it was busy. It’s a Sunday night. It’s a busy time at Disney Springs. The Polite Pig was packed. I went in, there was a pretty good line at the ordering counter.

I was in the mood for chicken 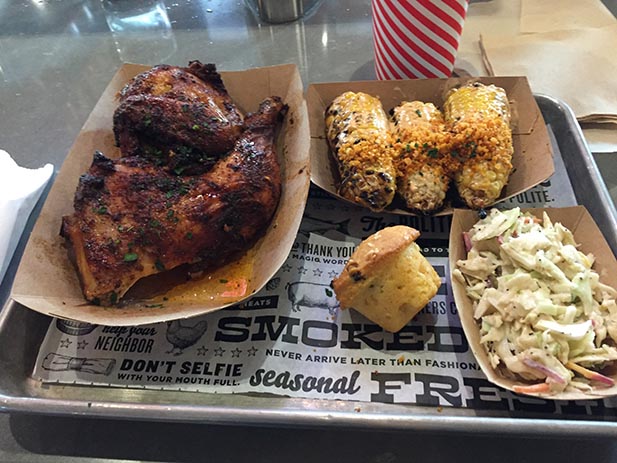 Here’s what my plate looked like – Photo by Dad

That’s one thing I thought I could eat. She took my order. So I ordered the rotisserie chicken. I kind of leaned back to relax, just started looking around knowing I had 15, 20 minutes to look around.

I took out my phone and started reading what I’ve missed over the last three or four hours in the airplane. All of a sudden, here comes my food. Five minutes and my food is here. It’s five minutes and the food is being delivered.

Wow, and everything was just like I ordered it. It had the chicken, it had the slaw, and this one really kind of scared me, a Jalapeño Cornbread muffin, and the ‘sweet corn’.

Here goes nothing. I started with the slaw because I knew that’s probably the least likely thing to offend me. In the south we like a very sweet soft slaw. This did not have that sweetness. It was good, but it was a little tart. it was okay. I could eat that.

Okay, next, I love corn on the cob or sweet corn. I think that sweet corn is something about an inch and a half around and six inches long. These are little bit ears. Baby ears. they were about 2 inches long and about as big around as a quarter. Mmmm.

If you’re going to say something is sweet corn, you don’t slather it with aioli or some kind of butter that’s sour. It was all right, but I was hoping a nice big ear of “sweet” corn and I didn’t get big or sweet.

SO now it was time for the chicken. I wanted to start with the dark meat because that’s usually the juicier and then you eat the breast. I eat the breast last. I took that first bite. I let it roll around on my tongue like a good food critic. It was okay. There was nothing wrong. It was hot, it was juicy. The spices aren’t exactly what I would like, but there was nothing at all wrong with it. I ate it. I ate it all. I ate even the white meat. I ate all of it.

I didn’t love it, but I did not like it either. I’d eat it again. If somebody twisted my arm and made me go the Polite Pig, I’d eat the same thing again. The food was good. It was decent. It didn’t match the spices that I like and that I’m used to, but it was quickly delivered. It was hot. It was what I ordered. I can’t say anything really bad about it. People seem to be really happy with the food and with what was going on at The Polite Pig.

Bottom line is I’d give The Polite Pig at Disney Springs three stars. It’s not the spices I like but there was nothing wrong with what I got. It was good. The service was good and the food was good. It’s just not what I like. That’s okay.

Have you ever eaten at the Polite Pig in Disney Springs? What did you think? Put it below in the comments.