Today is July 4th. What a great day to be an American. Today we celebrate Independence Day! 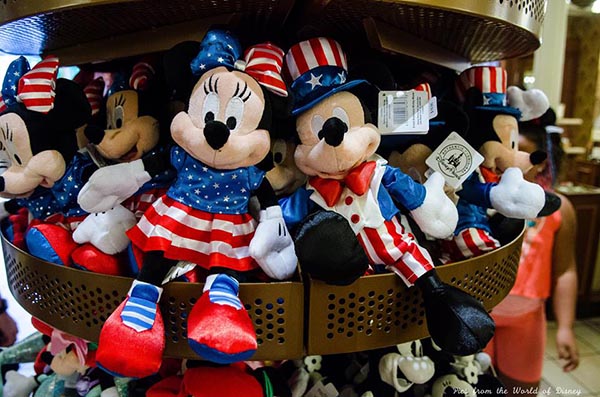 Walt Disney World is quintessentially American. Not only does it celebrate America in the Magic Kingdom and EPCOT, but every part of the whole resort screams America.

The fireworks at night, the flags that wave over every park, hotel, and building. The opulence of the Deluxe Resorts and in your face icons of the Value Resorts. The peacefulness of Port Orleans, the mega-shopping experience of Downtown Disney and the just the feel of Walt Disney World is the feel of America.

We thought it would be fun for the team to share there thoughts about WDW and the 4th of July. I think you’ll like it.

I’ve never been to WDW on the 4th of July, but I celebrate America every time I’m at Disney World.

I celebrate America in the one place that is most “American” of all of Walt Disney World. Casey’s Corner. Yes, Casey’s Corner. What’s more American than a hot dog and baseball? Sing with me… “Baseball, Hot Dogs, Apple Pie and Chevrolet.” Boy does Dad sing good. 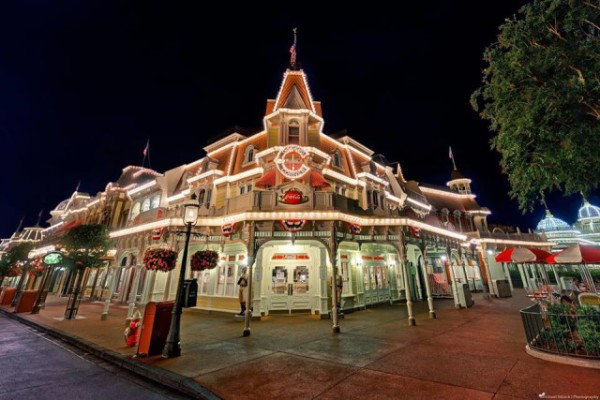 We can’t go on a trip to WDW without stopping at Casey’s and getting a good ole American Hot Dog. (Except when Disney had the wheat buns at Casey’s Corner. Totally un-American.) No, we don’t have a hot dog eating contest, but we do love our Casey’s Corner.

We love sitting outside of Casey’s and watching America go by. Yes, not everyone is an American, but that’s something that is a symbol of America too. The melting pot of people that roam this great country.

(Yes, Dad’s a little passionate about the good ole USofA.)

Main Street USA, Liberty Square, Frontierland, in fact the whole Magic Kingdom tells the story of America, but no where does it better than Casey’s Corner. 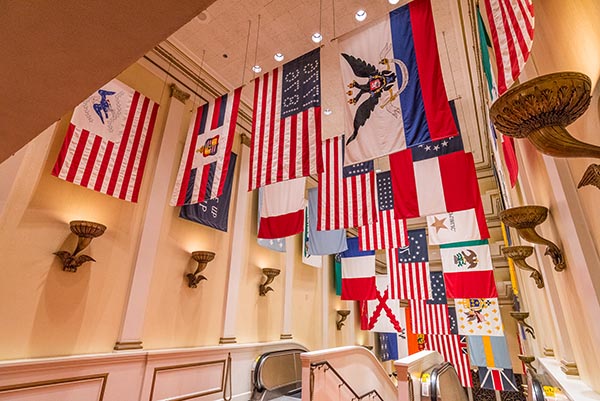 As a Canadian, I’ve seen a lot of 4th of July celebrations on TV and in the movies.  It looks like a lot of fun – red, white and blue, fireworks, great food, family and friends – what could be better?  But I didn’t’ really understand the energy of Independence Day until a couple of years ago at WDW.

I actually haven’t been to Disney World on July 4th (it’s on my bucket list) but I did visit about a week before in June 2012.  Even then, the park was getting decked out in patriotic bunting, loads of merchandise celebrating the stars and stripes were on sale, and I could FEEL how much people were eagerly waiting for the big day!

I love how you can really feel the spirit of American pride at WDW throughout the whole year with shows and attractions dedicated to the country’s history in Magic Kingdom and EPCOT.  It speaks volumes that even someone from another country can get all teared up at The American Adventure!  I guess that’s the magic of Disney – they can make fantasy, future, and even history come alive! 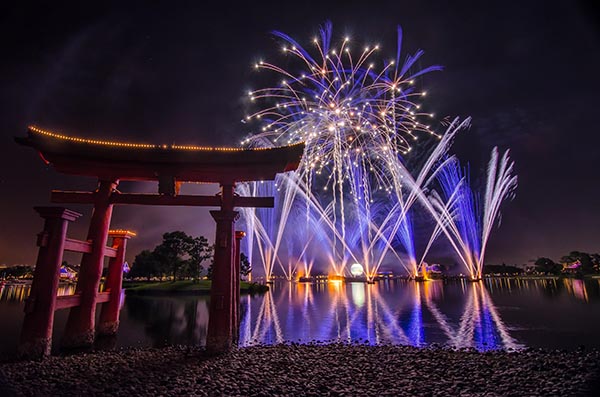 Visiting Walt Disney World on the 4th of July several years ago was an unforgettable experience like no other.  The most vivid memory from that day, which was spent by my family and I in EPCOT after a relaxing morning/afternoon at Stormalong Bay (the pool at Disney’s Yacht and Beach Club Resorts) took place much later on that night.

After IllumiNations: Reflections of Earth concluded, the patriotic fireworks special that followed, The Heartbeat of Freedom, far exceeded any expectations of what I could have dreamed that show to be.  The stunning colors throughout the display, combined with the most pride-instilling songs and significant quotes from American history, generated an involuntary array of goosebumps.

With this incredible stage set, I couldn’t help but be filled with emotion as I saw a countless number of fireworks launched above The American Adventure (one of my personal favorite spots in all of WDW).  When these fireworks stopped here, the most indescribable fireworks finale began back above World Showcase Lagoon.

This finale was grander, larger, louder and longer than I ever could’ve conceived it to be.  I will never forget that special feeling in my chest from the sheer power of these striking fireworks.  I have never seen anything as impressive, inspiring, and remarkable as this. 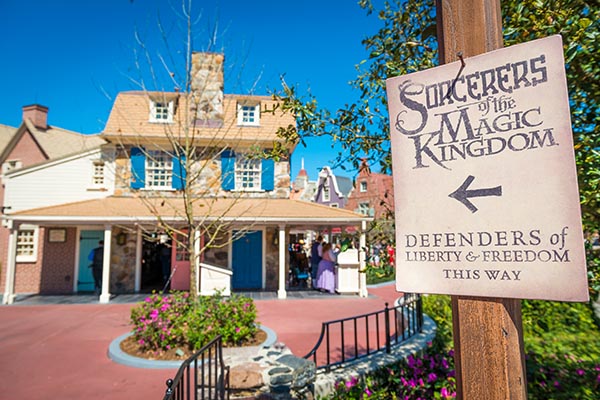 When I think of the 4th of July and Walt Disney World, I think of Liberty Square. There’s no better place at Disney to recognize America’s Independence than this quaint area.  A stop at the Hall of Presidents always leaves me feeling patriotic. It’s amazing to watch the presidential Audio-Animatronics and look back on American history. A ride on the Liberty Belle Riverboat also feels symbolic, especially since she sails down the Rivers of America.

The sights and sounds in this area set the mood. Disney’s attention to detail is really evident here; for example, the music played is so specific that only instruments that would have been used during this time can be heard. I love the Ye Olde Christmas Shoppe, replica of the Liberty Bell, and Liberty Square Portrait Gallery. I enjoy how small Liberty Square is because it really feels like you are in Colonial times.

Ultimately, every time I step into the Magic Kingdom, I am overwhelmed with feeling patriotic because of the fact that Walt Disney followed his heart, didn’t let barriers stop him, and achieved the American Dream. 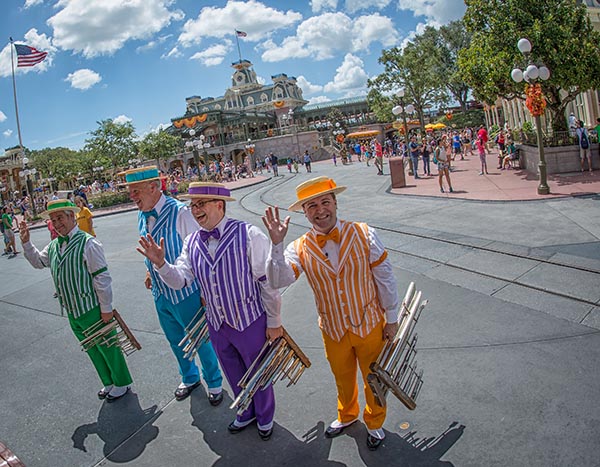 The Dapper Dan’s are something special – Photo by WDWOW

It’s summer time and you and your family would like to visit The Walt Disney World Resort during the 4th of July but you’re wondering what is there special to do or see during your stay.

Well there is so much to see and do that is directly connected to the 4th of July.  I am going to give you my TOP things to do and see during the 4th of July at Walt Disney World.

The Dapper Dan’s, have you stopped and watched them perform?  I could sit there all day and listen to them harmonize together.  During the 4th you will hear them sing several patriotic songs and they are amazing!  Make sure you stop and watch them perform.

Casey’s corner, what’s more patriotic then a hot dog from Casey’s?  I can smell the hot dogs and toppings now and I am not there.  We always take a picture in front with the baseball player statue and then order hot dogs and fries with all the fixings.  Am I making your hungry yet?

The Hall Of Presidents.  This attraction is moving and inspirational.  To see every president together on stage and the history that they talk about is awesome and something not to miss.

Let’s take the monorail now over to EPCOT and stop in at the American Adventure.  This is a must do for me and my family several times during our vacation.  This attraction is more than an attraction or history lesson it is an emotional, inspirational and heartwarming account of our nation.  The song at the end Golden Dream gives me goose bumps every time I hear it.  The video on the screen that goes along with it brings a tear to my eyes every single time.

Now that you have visited several patriotic attractions and you have had a bite to eat, don’t forget to go back to the Magic Kingdom in time for the flag retrieval and to pick a spot for the special 4th of July fireworks at Cinderella’s castle.  My favorite spot is at The Top Of the World Lounge or at the Polynesian Resort beach, but if you’re not staying at either one of those resorts right there on main street in front of the castle is the place to be for this spectacular show.

What? Fireworks? Yeah, we’ve got some. Check out this months WDW Magazine. It’s our Fireworks issue. It’s free to view this weekend. 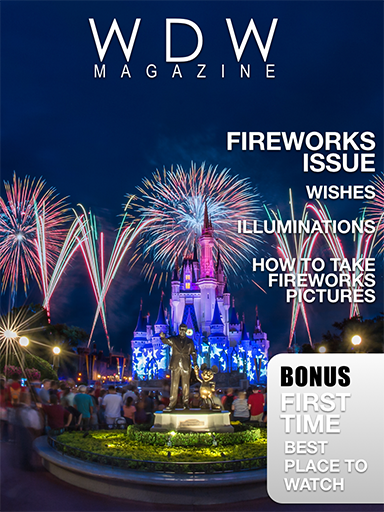