On March 12, I got one of the most interesting emails I think I’ve ever received. It was from Disney inviting me to come see Toy Story Land being constructed. What? Yep, come to Walt Disney World every 30 days and see how Toy Story Land gets built.

I was shocked. Disney has NEVER allowed anyone to go behind the scenes during construction and talk about it. WOW!

So, for the last 3 months, I’ve been hopping on a plane every 30 days and going to Disney World to watch the grass grow at Toy Story Land. Let me tell you about it. 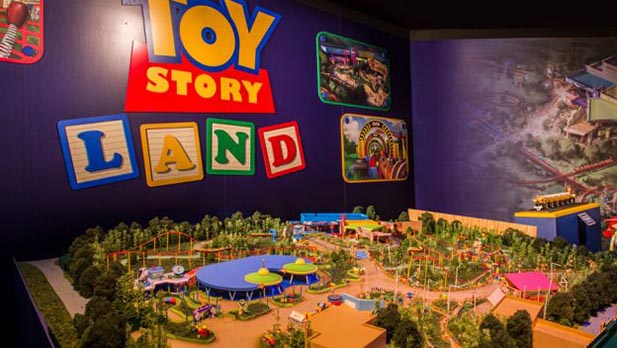 Mrs. Mom and I have purchased 2 houses that were built from the ground up. Seeing the construction at Toy Story Land was kind of like watching those houses being built. Every time you visit you are excited to see progress. Sometimes you see it, sometimes you don’t.

The Walls are Up 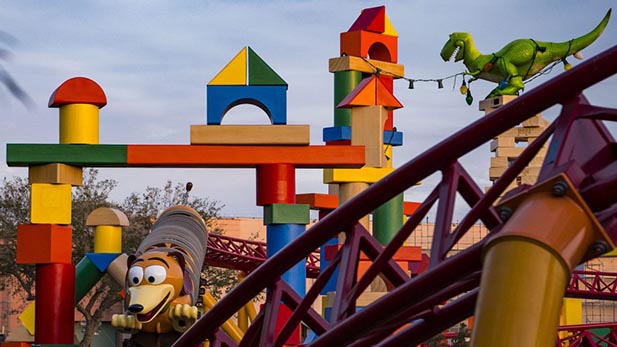 Our first visit was an March 22. Exactly 100 days before the opening date of June 30 which Disney had just announced.

Right on time the Disney people started talking. Blah, blah… After minutes or so I heard, “Let me introduce to you Ryan Wineingar, the lead Imagineer on the Toy Story Land project. He’s going to take you into Toy Story Land.” My ears perked up. It was time.

Ryan was cute. I don’t mean that in a derogative way. He was excited. He told us the story of Andy’s Backyard. He must have said at least 10 times how excited he was to show his project to some “real people”. In fact, let me just show you…

I was excited too.

After Ryan finished, off we went through one of those doors marked Cast Members Only and back through the back lots of Disney’s Hollywood Studios. We were escorted through a construction gate into Toy Story Land. Right in front of Slink Dog Dash (the new roller coaster).

They had built us an area using those big highway divider things. We could roam around some, but we were pretty confined. The good thing was we could see most of Toy Story Land.

It really was like the first time you see a new house when they put up the insulation on the outside. You can see most of what’s happening, you can get a good idea of what things are going to look like. You walk through the inside and see the outlines, but you can see there’s a lot of work to do.

Disney had a lot of work to do. The structures were up but they were just like the house with the insulation. All white. No character or color. It was hard to imagine what they were going to be.

I will say that at that time, 100 days before opening day, Slinky Dog Dash was pretty well done. Videos had already been posted of Jessie and Rex being placed and even one of Slinky Dog himself on the track. All the vegetation had been placed around the ride. The grass was tall. 3 feet tall.

Ryan told us all about it. He said that we were in Andy’s backyard and we were the size of a green army man. 2 inches tall so 3 feet tall grass made sense.

He pointed out the new entrance area for Toy Story Mania. It was kind of hard to imagine. It was just a wall and a building. All white. Very white.

Down the way was Woody’s Lunch Box, the new quick service restaurant. Again, a white building. In fact, from where we stood it just looked like a white wall.

Up from Woody’s Lunch Box was the Alien Swirling Saucers building. Because of the a hill, we could only see the top of the building. We could see that the roof wasn’t complete. We could see support beams. It was like that house with the siding but no roof yet.

I don’t want to make it sound like I wasn’t impressed. I was. I could almost see the vision. It helped that Slinky Dog was pretty much done. (I think we could have ridden it, but they didn’t let us.) There was a lot of work to do, but we could see the structure of the house. Really cool. 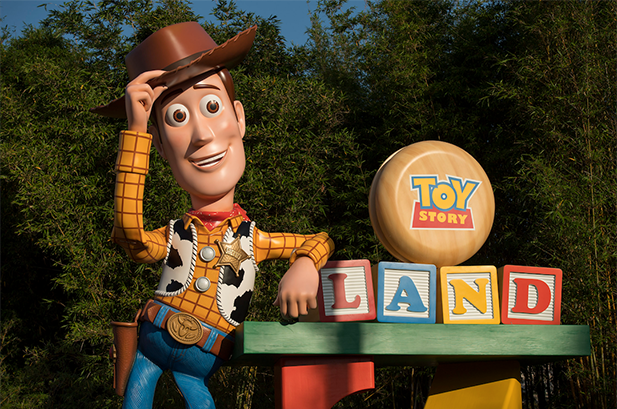 Trip 2 was the “I know there’s a lot of lot of work being done but I can’t really see it” trip. This one was on April 22. It was a hot and humid day that threatened rain. We arrived at the Toy Story model again right on time and were told that we wouldn’t get into the land due to lightning. How disappointing.

We did get to go back to where we could see in, but we didn’t get a good view. This was the exact day that the Woody entrance structure had been installed. In fact the Imagineers were telling us they had just finished painting the blocks that Woody sits on.

Peering around it looked like nothing really had been done. The buildings still were white. A few more of the light standards were up, but really, it was like visiting the house under construction when you can’t actually see progress, but you know it’s happening. 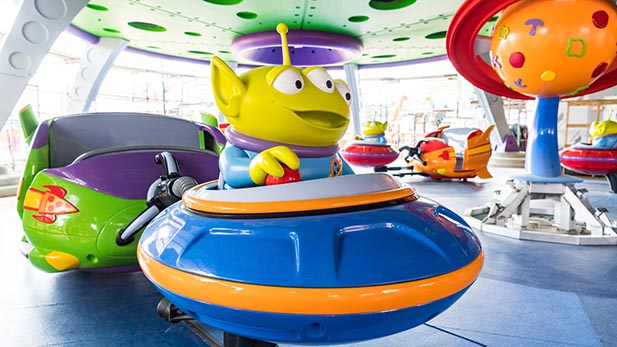 This trip was very different from the others. It started with a briefing/luncheon at Ale and Compass, a new restaurant in the Yacht Club Resort where Disney stuffed us full of some really good food. Then we all jumped in our cars and hurried over to Hollywood Studios for our tour.

We followed the same procedure, meet at the model then head back to the land. There was a slight chance of rain, but we lucked out. No rain and we got to go right in through the construction fence and right back to our “pen” in front of Slinky Dog Dash.

My first impression was that COLOR had come to Toy Story Land. Buildings were no longer just white. They had color on them. The Tinker Toy light poles were all around and had Christmas lights strung around them. Forty foot tall trees had sprung up. Lots of them.

(Disney Horticulture is pretty amazing. They can grow a 40 foot tall tree in 30 days. AMAZING!)

Looking around the land, the entrance to Toy Story Mania was coming along. there was still scaffolding on the building and the wall still wasn’t finished, but there was starting to be some color.

From what I could see it looked like Woody’s Lunch Box was ready to open. the roof was all done on Alien Saucer Swirl.

There was still a lot of work to do like putting the lightbulbs into the Christmas lights, finishing up the outside of Toy Story Mania’s entrance and from what the Imagineers told us but the finishing touches on Alien Saucer Swirl, but all in all it was coming right along.

It really was like the house. You come back a couple of weeks before closing and the paint crews are finishing, the carpet layers are laying carpet, the landscape crew is starting to put in sod. That’s really what it felt like.

Watching the construction of Toy Story Land has been INCREDIBLE. I want to give a big thank you to the “Disney Influencers Group” for inviting me on this grand journey. It’s now less than 35 days until Toy Story Land opens. I can’t wait to see the final results.