I know, that’s crazy talk. If you don’t want to stand in line at Walt Disney World, that’s why you need to check out Dad’s ULTIMATE FastPass+ Cheatsheet. 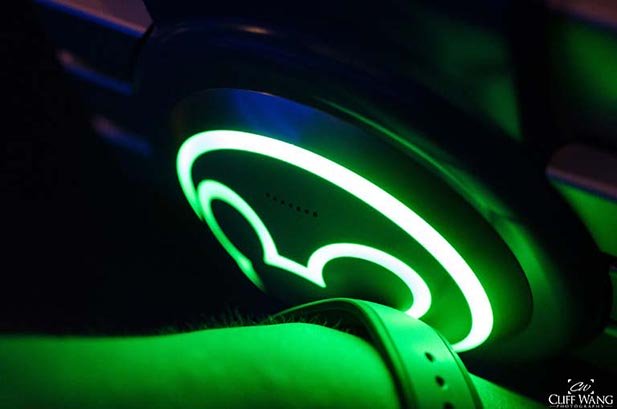 With FastPass+ green is good – Photo by Cliff Wang

This thing is just cool!

Before we dive into the cheatsheet, we probably ought to talk a little about FastPass+.

FastPass+ is Disney’s version of a front of the line pass. With FastPass+ you skip the regular line and go right to the loading station of the ride.

And yes, you can “lock in” your pass to the front of the line.

For more information on FastPass+ check out…

Three of the four parks have tier systems – attractions in Tier 1 are typically more popular, and guests can pick 1 of these attractions as 1 of their 3 FastPass+ selections. Then, you select your remaining 2 attractions from Tier 2.

Once you use your 3 scheduled passes you can make more using the MyDisneyExperience app or by going to a FastPass+ kiosk (located around the parks). You can even go to other parks and get a FastPass+. Your 4th selection can be from Tier 1 or Tier 2. 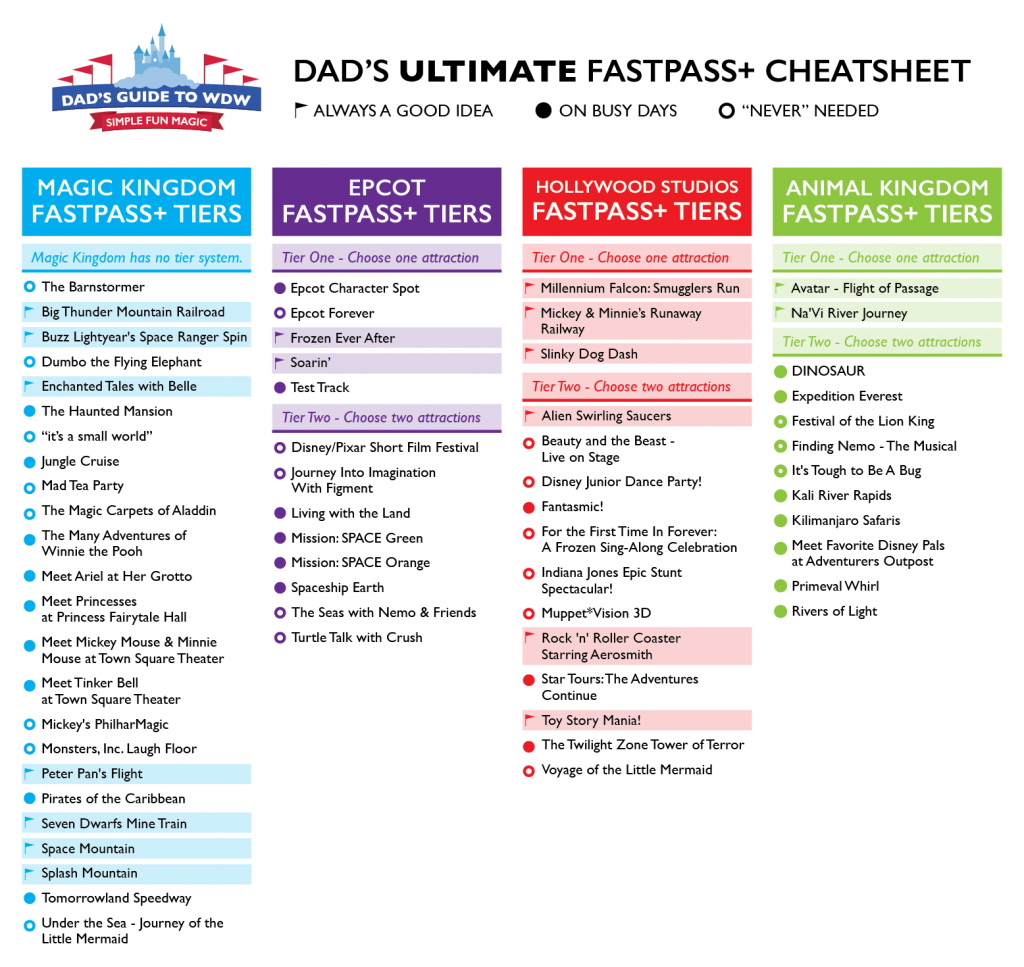 We have listed all the attractions that offer FastPass+ broken down by park, then by Tier 1 or Tier 2. Then we marked which attractions you need most and least –

All of these terms are relative. Let’s take them one at a time.

No, you do always need a FastPass for say Peter Pan’s Flight. If you were to arrive first thing in the morning on a slow day you could probably ride with minimal waits.

These attractions are the busiest rides in each park. Its pretty much “always a good idea” to have a Fastpass for them if you can get one.

The next marker is for busy days. Yes “busy” is subjective. What I mean by that is when crowd levels reach moderate or higher levels. Yes, I include moderate because these days moderate is pretty busy.

There are some rides that have FastPass+ available on where you pretty much “never” need a FastPass. Yes, there are times when lines can get long, but for the most part you don’t need FastPass+ for these rides.

Let’s go back to our Peter Pan’s Fight example. On a typical day the standby lines reach 90 minutes pretty quickly. So if you have a FastPass for Peter Pan’s Flight you can save a whole lot of time standing in line.

Yes, Dumbo the Flying Elephant is on the “Never” needed list. Since the upgrade, even if you do have to wait, there is a play area for the kiddos where they can wait in style.

EPCOT is probably the hardest park for FastPass+ because of the “group” system Disney uses.

When you make your initial reservations you can choose one attraction from Tier 1 and two attractions from Tier 2.

Obviously, hard choices need to be made in EPCOT. I don’t ever recommend scheduling a FastPass for Illuminations:Reflections of Earth. Never. If for no other reason than it keeps you from making more Fastpass+ reservations during the day.

My suggestion from Tier 1 is to get Frozen Ever After. That’s the longest line these days. Soarin’ is second but you can only choose one.

Like EPCOT you make one selection from Tier 1 and two from Tier 2.

Again, I’m not a fan of using a FastPass on Fantasmic! since you’d have to give up some really great rides like Tower of Terror or Rock ‘n’ Roller Coaster. Plus you can always get one of the Fantasmic! dinner packages that comes with special seating.

Animal Kingdom has some great headliner rides. Lines can get pretty long and FastPass+ can save a lot of standing in line.

Up to 3 selections can be made but only 1 from Tier 1.

Avatar Flight of Passage is a must if you can get a reservation. Wait times are in the 3+ hour range. Rivers of Light is another of those that you can get a “dinner package” for and save a Fastpass.

Would you like more information on FastPass+? Dad has put together a guide that has everything you need to know about FastPass+. I call it Dad’s Ultimate Guide to FastPass+. (Catchy title right?) Just click the button below to download it. 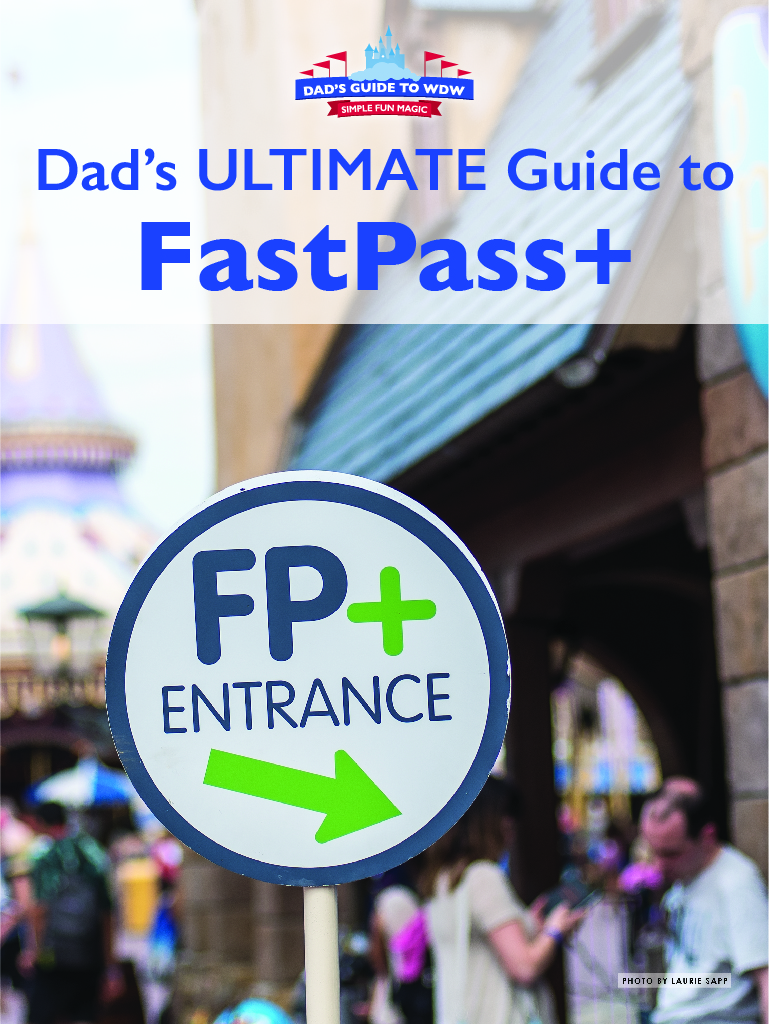 And yes, it includes a printable copy of Dad’s Ultimate FastPass+ Cheatsheet.

FastPass+ is a Walt Disney World trip planners best friend. Dad’s Ultimate FastPass+ Cheatsheet will help you figure out which attractions you will need a FastPass for.