“I really like your daily morning predictions on crowd levels, Thanks for doing that. We live close to the parks and wondering if there are any real-time crowd reports out there. I’ve tried using the Lines and Disney app.

They’re pretty good to get real-time information about rides, but not really accurate for crowds. Example: There could be a 75-minute wait for Soarin’, but the World Showcase is empty. Or, during the Food and Wine Festival the World Showcase is packed, but there isn’t any wait for rides. Any cast members on Twitter that post, ‘Oh my goodness, no one is in the Magic Kingdom today,’ so I can hop in the car for an impromptu Disney day.”

Then she mentions a website that does it for Southern California Attractions.

Disney does a good job of what’s going on on the rides. They’re both fairly accurate. Touring Plans I think is a little more accurate than Disney, because Disney cheats. Disney sometimes pads their line length numbers to discourage people from going on the rides that have longer lines, so they cheat. Touring Plans gives you an accurate look of what the lines are. 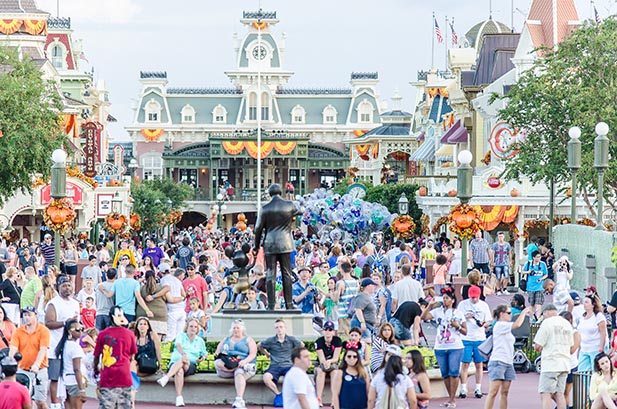 These crowds don’t look too bad – Photo by Laurie Sapp

Touring Plans also has their daily park crowd predictions. You can what the crowds levels will be in the parks every day. We only do daily overall predictions, but Touring Plans goes a little deeper. They do the daily park-by-park, what’s going to be the crowd level in each park, and they’re pretty accurate about that.

That’s first place you could get the information your looking for. Check out their daily park predictions of crowds and you’ll get a general idea of what’s happening. Of course that’s not going to help you with EPCOT on World Showcase versus Future World.

The other thing they do is on their Twitter feed they actually have people in the parks every day that are tweeting live dialy. They would answer your questions if you wanted to ask, “Is the Magic Kingdom busy today? Yes? No?”

So at Walt Disney World, if you decide say at 9 in the morning “I want to go to the parks today.” Then you tweet to TouringPlans and ask, “What are the parks like right now?” You’re, say, in Tampa. You drive over that takes 90 minutes. By the time you get there, things can really change. Ninety minutes is a long time crowds wise at WDW. That’s especailly true of early morning crowds. They are not always a predictor of what middle-of-the-day and afternoon crowds will be. If you wait until noon and try to predict, that’s a little different.