We are going to Magic Kingdom on one of the nights it closes at 7:00 for the Christmas Party. I had dinner reservations scheduled at 7:25 and we are not staying for the Party. Does this mean I need to cancel our dinner reservations since they are after the park “closes” at 7:00? 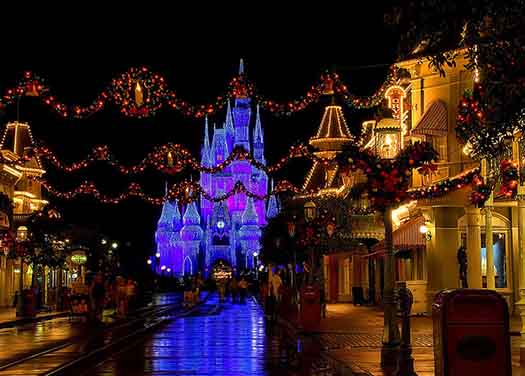 What a great question. I can see where this could be a big problem, but, as you’ll see, it’s not. First and foremost don’t cancel anything. Sit back and Dad will “splain” it all to you pronto.

Mickey’s Very Merry Christmas Party (along with Mickey’s Not So Scary Halloween Party are both special ticketed events. The Magic Kingdom will close at 7:00 pm on the nights the Parties are held.

PS. We absolutely love going to the Parties. There is nothing better than watching it snow on Main Street. What an absolute joy. You’re gonna love it.

So what does it means when it says the park “closes”? Most nights, when the Magic Kingdom closes people mill about for a while looking in the souvenir stores. (Disney leaves them open for about an hour after closing time most nights just so you can spend more money.) It’s a little different on Party nights because the park doesn’t really close.

On Party nights, guests with Party tickets will have wristbands. Disney Cast Members stand at the entrances to the lands and verify that you have your wristband as you walk around. If you don’t they’ll ask you to exit the park. (I think they check on each of the rides, but I never actually saw anyone checking.)

If you have a dinner reservation at one of the restaurants after the party begins but don’t have a wristband it’s no problem. If a Cast Member asks you, just tell them about your reservation. They’ll probably help you get to your restaurant. (Disney likes it when you spend money at the restaurants.)

After you’re meal you’ll probably be able to browse Main Street without anyone saying anything. Depending on the timing, you might even catch a parade of fireworks show. That would be “terrible”.

Like I said, no problem with a 7:25 reservation. Relax, have fun, and enjoy!