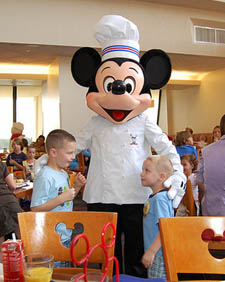 The head cheese - pic by n2linux

There’s a disaster of Biblical proportions at Walt Disney World. At least if you read some of the Disney Forums that’s what it seems.

Where? The disaster is at Chef Mickey’s.

So what’s the fuss all about? The fuss is about the head cheese himself.

What’s the Mouse done now, got the health department checking up on him? Nope, the story is that the big mouse is no longer (like the picture to the right) visiting tables in the restaurant.

That’s kinda a big deal isn’t it? Maybe, but instead of coming to the tables, Mickey now greets each party at the door and poses for pictures with the party. Yes, that means if you want a picture, you’d have to buy one …