Adventureland is an area inhabited by spirits, pirates, poachers, and who know what else. You can ride on a Jungle Cruise with the Pirates of the Caribbean looking for the gods from the Tiki Room … Laugh it up Fuzzball (oops, wrong movie).

In Adventureland you can explore far away lands that are full of interesting characters that offer interesting adventures to kids of all ages. You can train to be a pirate, take a ride on a flying carpet, challenge the mighty Tiki gods, or even climb into a tropical tree house that has running water. Most of these attractions have been here since the park opened and are copies of Disneyland rides. These are timeless classics that get better with age. 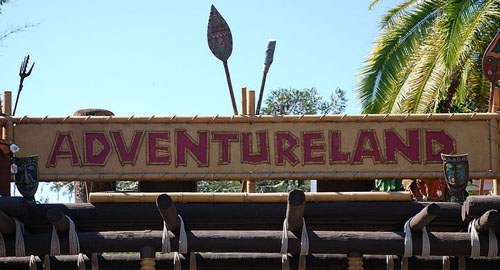 There is something for all ages in Adventureland. The small ones will won’t want to miss – 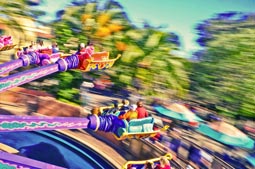 The big rides in this area are some of Disney’s best. They appeal to kids of all ages. Here a a couple of blockbusters – 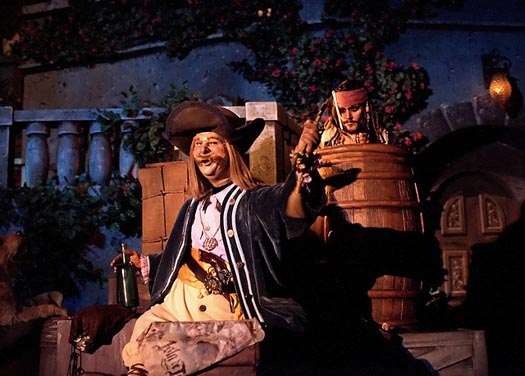 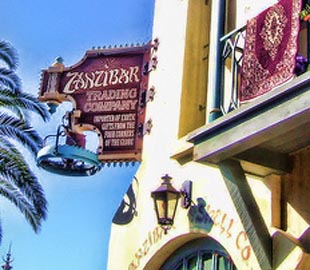 Shopping is quite unique in Adventureland. The shops are more like you would see in the Indiana Jones movies only not nearly as dusty. Agara Bazaar, The House of Treasure, and The Pirates Bazaar are full of great nick nacks that you can’t find everywhere.

Who doesn’t want a pirates eye patch or their own flying carpet (motor not included). At the Zanzibar Trading Company you can get safari-themed clothing and hats.

Adventureland has really stepped up it’s dining game recently. Fast food is available at Tortuga Tavern (BBQ sandwiches, open seasonally) . The Jungle Cruise Navigation Co. Skipper Canteen (what a mouthful!) is the only table service joint in the land, and it serves up some pretty exotic stuff for a theme park – with the bonus of Jungle Crusise style jokes from your “skipper” servers. 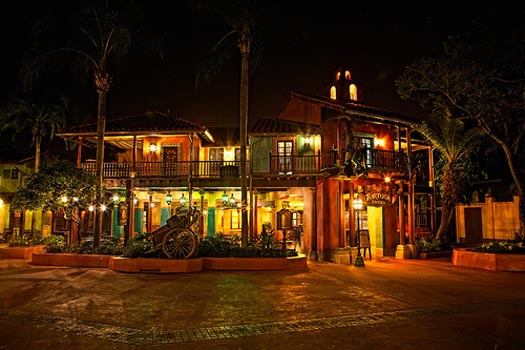 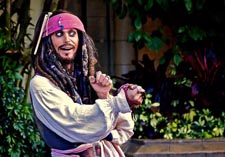 This is home to Captain Jack Sparrow’s Pirate Tutorial. Several times a day pirate lessons are given, sometime led by Captain Jack Sparrow himself to children of all ages. Men and Women, Boys and Girls who want to learn to be a proper pirate. (That’s an oxymoron if I ever heard one.) It’s a 30 minute lesson on pirate behavior and maybe even a tutorial on those “fuzzy pirate rules”.

Want to become a real pirate? At the Pirates League you take the Pirate Oath and sign the book to join the crew of the Black Pearl. Be transformed into a swashbuckling first mate or girls can become an Empress worthy of Captain Jack himself.

During the day there is a steady stream of Disney characters that come around and sign autographs. You will find characters here that are from the movies that are represented in this area. Mickey and Minnie and some of the regulars show up too. Make sure you have a pen and camera handy.

Every time we visit Disney World we have to drive those pesky boats that you’ll find beside the Jungle Cruise. Yes, I know, you have to pay an additional dollar or something, but, well, you just have to. It’s in our DNA.

Take a video tour of Adventureland

This area tends to get late crowds. Why? Because they are all following Dad’s touring plan, that’s why. THE PLAN we use has Adventureland as our last stop of the day. It works for us.

If you need some help to make your plan, you might check out my friends at Touringplans.com. They have over 100 touring plans for the Walt Disney World theme parks. These plans will save you hours as you go through your day.

The rides in Adventureland were mostly designed by Uncle Walt himself. His genius shows up in every step. Don’t miss these timeless classics on your next Disney World vacation.