Hi Dad, we are going on a cruise on the 7th of December to the 14th, 2013. Would you go the 4 days before the cruise or the four days after the cruise. 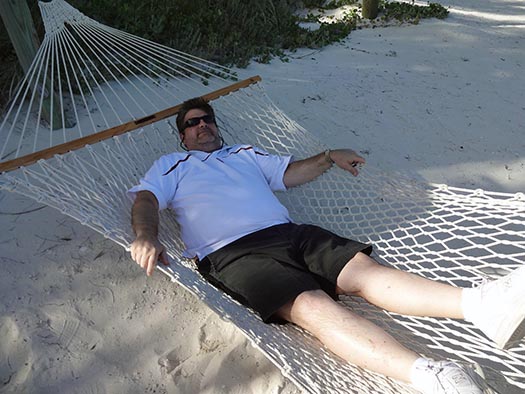 Take a rest after your trip like Dad did – Photo by Mrs. Mom

Dad’s before would probably be better Answer

OK, now I’m really jealous. Can I come? What a wonderful time for a super trip. There is nothing better than a Disney Cruise to top off a Disney World vacation. I know. That’s what we did last year. (We also came back to Walt Disney World after the cruise so I know both ends.)

Yes, I just gave away the answer in the opening paragraph. What’s wrong with me? I’m not supposed to do that. I’m supposed to drag it out and get you to read the whole story because I write so well, but trust me, the rest of this will be pretty special, so stick around.

Now, don’t get me wrong the week after you come back will be a good time too, but just not quite as good.

The second reason is a Walt Disney World vacation is a exhausting experience. Every day you will spend hours on your feet. You’ll walk over 5 and up to 10 miles per day. There are long days and not a lot of rest. That’s why I recommend you take a nice relaxing cruise after your Disney World trip.

We found it was great to just sit on the balcony with our feet up for a couple of days. To have a few days to recover from the physical nature of Disney World. Relaxing at Castaway Cay was one of the highlights of our whole trip (of 15 days).

But the main reason to go on the Disney Cruise after your Disney World vacation is the food. After you spend 4 days on the Disney Dream (or any other Disney Cruise ship), you won’t want to go back to the disappointing food at Disney World. You won’t think it’s disappointing until you’ve spent a few days on the cruise ship. But the food on the Dream is amazing and if you go back to Disney World after a cruise, you’ll be disappointed with the food. (I think I’ve said that already. I hope you’re getting the idea I liked the food on the Dream.)

One thing I will really recommend is that you give my friends over at Dreams Come True Vacations a shout and let them help you get all the details just right.

Marie, I think I’ve made it pretty clear that I would recommend you do Disney World first then the cruise. I think you’ll be happier that way.