Do you think Disney will ever use a “Point System” for the Dining Plan? Here’s an idea… Instead of offering the different Dining Plans, assign points to the different type of meals. They could keep it simple such as:

This way if you ran out of points toward the end of your stay you could buy extra. Also, if they wanted to offer a special such as the free dining plan, they could just offer a certain amount of points instead of the Deluxe, Counter Service, Etc.

Just an idea and was wondering if you had heard any rumors on a possible “Point System” or rumors on Dining Plan specials for Spring 2013. 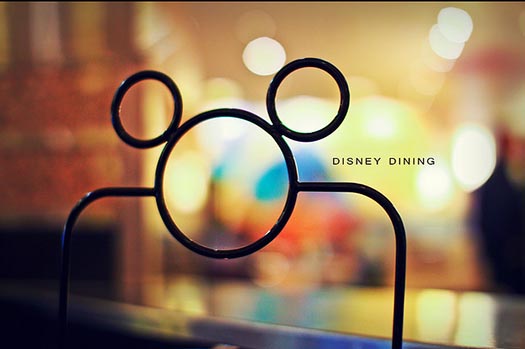 The Disney Dining Plan has been a huge success at Walt Disney World. After years of developing a system and getting guests hooked on it, the Disney Dining Plan has become so popular that Disney has been able to increase the price of the plan while decreasing what’s included. It’s a major money maker, so it’s not likely to change unless a new format would be even more profitable.

Now, it’s no secret that Dad isn’t a big fan of the Disney Dining Plan. It just doesn’t make sense for most families, unless it’s free. Dad’s willing to admit that it CAN save you money (but do your homework with this calculator to help you decide), but from a business point of view, I just can’t see Disney changing their system to a points-based plan that would benefit the guest, not the bottom line.

Let’s look at the facts: when the Disney Dining Plan was introduced in 2005, there was only one plan, and per person per day it included 1 Table Service credit (appetizer, entrée, dessert, beverage and gratuity), 1 Counter Service credit (entrée or combo, dessert, and beverage), 2 Snacks, and 1 Refillable Resort Mug. And it cost $35 for adults, and $10 for kids.

Only 7 years later, there are several different plans, but for the sake of comparing apples to apples, we’ll look at the Standard Dining Plan. It includes 1 Table Service credit (entrée, dessert, and beverage – gratuity is extra), 1 Counter Service credit (entrée or combo, dessert – lunch and dinner only, and beverage), 1 Snack, and 1 Refillable Resort Mug. The 2013 cost is $55.59 for adults (and even more in peak season).

Clocking in at $37.38 per person per day, even the Quick Service plan is more expensive in 2013 than the original dining plan! Disney has really fine tuned the plan to maximize profits, but that hasn’t stopped hundreds of thousands of guests per year from buying into it! Switching to a points system as you suggested would be beneficial for guests, but not for Disney – I just don’t see it happening.

You can catch a great article on the evolution of the Disney Dining Plan over on the TouringPlans.com blog here.

As for Free Dining in spring of 2013 – it’s really hard to say at this point. My first reaction is to say that Free Dining is Dead, but we all know how wrong Dad has been about that before, so let’s say it’s a 50/50 chance. Keep your eyes peeled later in 2012 for special offers! Disney has always offered the Standard Dining Plan to guests of Moderate and Deluxe Resorts during this promotion, but there is always the possibility of change.

You could always make a reservation through Destinations to Travel and when Free Dining does come out, they will make sure to get your name on the list.

Matt, I haven’t heard any rumors of the Disney Dining Plan switching to a points based system, but you can always contact the good folks at Disney with your suggestion! You never know what might come of it!