What happens every year on Christmas morning?

No, silly, everyone huddles around the TV and watches the Disney Parks Christmas Day Parade.

Sure you do. That’s what Christmas is all about, a beautiful Christmas morning at Walt Disney World and Disneyland. 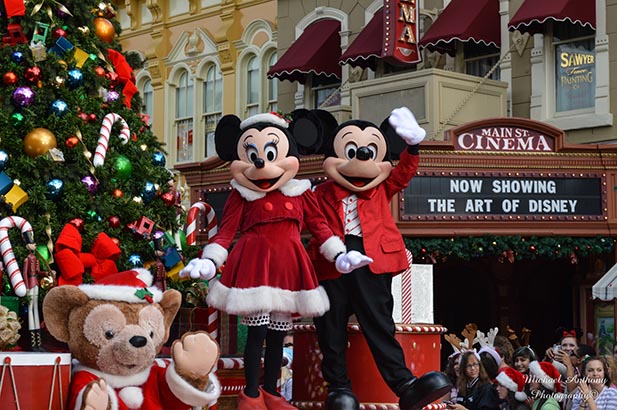 The Disney Parks Christmas Day Parade is much more than a parade. It’s a 2-hour commercial for the Disney Parks, hotels and Disney sponsored entertainers. The show features some big entertainer performing on the Magic Kingdom Castle stage and another at Disneyland.

There is a parade that goes right down Main Street USA.

When is the show taped

This year, the Walt Disney World Christmas Day Parade is actually being taped at Disneyland in Anaheim, CA. The portions of the special that feature WDW will feature musical numbers to be filmed at Disney’s Hollywood Studios (November 3), Animal Kingdom (November 4), and Magic Kingdom (November 5-7).

The taping is done over several days. Each part is done then redone then done again.

When can I see the Show

The show can be see on ABC on Christmas Day. Here are the times –

So, Dad if what we see on TV is not live, what is Christmas Day really like at the Magic Kingdom?

Glad you asked. Christmas Day is the busiest day of the year at the Magic Kingdom. There are wall-to-wall people. It can take you an hour just to get a Coke.

This parade has been on TV almost every year since 1982. Our family rushes to watch the show every Christmas morning. It’s one of our family traditions.