Hi , I’m watching a nice TV program about Walt Disney World and they have a large fireworks display. They also burn a large amount of propane in explosions. What does the Disney company do to offset the large amount of carbon dioxide they produce for this type of entertainment ? Thanks 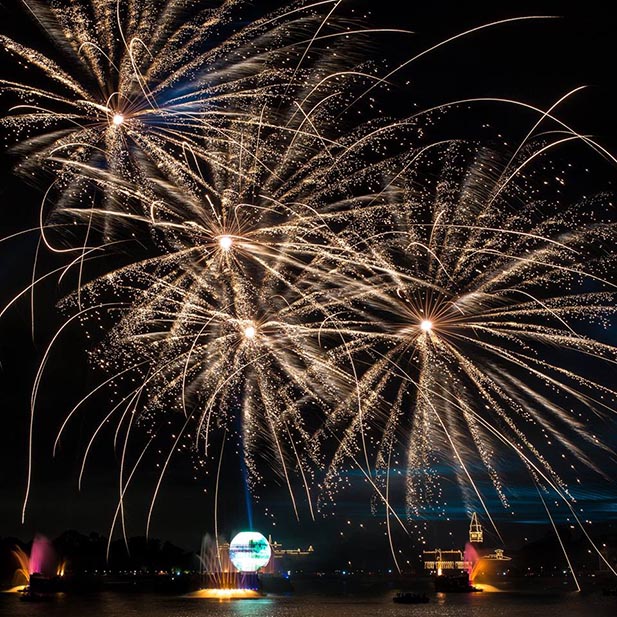 Fireworks at Illuminations are awesome – Photo by Disney Image Makers

I think you win the prize for the most unusual question Dad has ever gotten her at Ask Dad. I’m sure we’ve never talked about Disney’s Carbon Footprint before, but here goes.

First let me say that the Disney Company is one of the most environmentally friendly companies in the US. They strive daily to be more “green” in all that they do.

Disney has a whole division devoted to being good neighbors. They call it Disney Citizenship. They spend a lot of money trying to make the parks, hotels, restaurants and everything they do more environmentally friendly.

When it comes to the fireworks shows, Disney has pioneered a new technique that uses air to launch fireworks shells instead of burning powder. They have air cannons that actually shoot the shells into the air. It’s really pretty cool.

The other way that Disney offsets these emissions is by surrounding the park with thousands of acres of trees and vegetation. The forests around WDW act both as a natural sound buffer, but they also clean the carbon emissions from the parks and the cars that visit.

While I’m not sure that Disney has any program to directly offset emissions from the fireworks shows, they have all kinds of programs to, as Disney says in their Environmental Policy, “establish and sustain a positive environmental legacy for Disney and for future generations”.

David, what an interesting question. I’m sure someone at Disney has thought about it and they are looking for ways to make even the fireworks shows more environmentally friendly.