Disney World Hours vary widely. Walt Disney World is not just one park with predictable hours. It’s 4 (really 5) theme parks, 2 water parks, hundreds of restaurants and shops all of which have hours that change with the wind… oops, I mean change with the seasons and the number of guests expected to be at the Disney World parks.

Hey, Dad. Why do I care what hours the parks are open during our Disney World vacation?

The Entrance to Walt Disney World 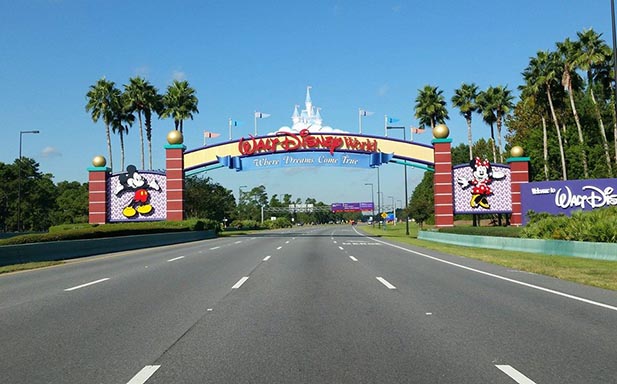 The Disney World Hours for the theme parks are pretty predictable for the most part. EPCOT and Animal Kingdom have fairly stable hours. The Magic Kingdom and Disney’s Hollywood Studios change schedules depending on the number of guests Disney expects.

All of the parks normally open at 9:00 in the morning. Early Extra Magic Hours will push that back till 8:00. Normally. However, busy times are far from normal. That’s where the monthly calendars come in. 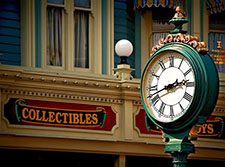 The Magic Kingdom has the most diverse hours of the theme parks. Usually the Magic Kingdom opens at 9:00 in the morning, but the closing time can be anytime from 6:00pm to 3:00am.

Of coures, there are days when the Magic Kingdom opens early. I’ve seen opening time as early as 6:00am during Early Extra Magic Hours. 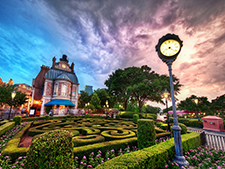 That being said, EPCOT is the most stable of the parks when it comes to Disney World Hours. Future World will open at 9:00 (8:00 on Extra Magic Hour mornings) and start closing at 7:00. The World Showcase will open at 11:00 on most days and remain open until the park closes. EPCOT will close at 9:00 in the evening (9:30 during busy periods) and even later on a couple of major holidays. (Evening Extra Magic Hour will keep the park open till midnight.) 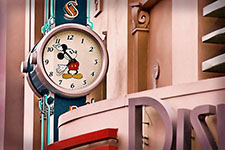 Disney’s Hollywood Studios is probably the Disney World theme park where the Disney World Hours matter most. You can really save time waiting in line if you are at the park when it first opens and ride Rock-n-Roller Coaster and Tower of Terror before the crowds arrive.

For the most part Disney’s Hollywood Studios opens with the other parks at 9:00 but closing time depends on what’s happening. Most nights it’s 7:00. During the busy times it can be as late as 10:00 or later.

For most of the year the Animal Kingdom keeps bankers hours. Sing it Dolly… “Working nine to five…” During the busy periods the park can stay open as late as 8pm. I’m not sure how they keep the animals up that long past their bedtimes.

Disney has two of the world’s best water parks. Typhoon Lagoon and Blizzard Beach. They normally open at 9:00 in the spring and summer and 10:00 in the winter. During the summer they will stay open as late as 9:00 and during the winter they will close as early as 5:00.

Typhoon Lagoon closes in December and the first week of January for refurbishment then Blizzard Beach closes from mid-January to early March.

Extra Magic Hours is a perk for Disney Resort guests to get some extra time in the parks. It extends the normal Disney World Hours. On selected days you can enter a park an hour early or stay up to 3 hours after the park has closed to other guests.

If you are staying in one of the Disney Hotels, you can get into the Extra Magic Hour park one hour before the published opening time or stay up to 3 hours after the closing time.

Different parks have different dates and times. Check Dad’s calendar pages to see which park has Extra Magic Hours while you are there. 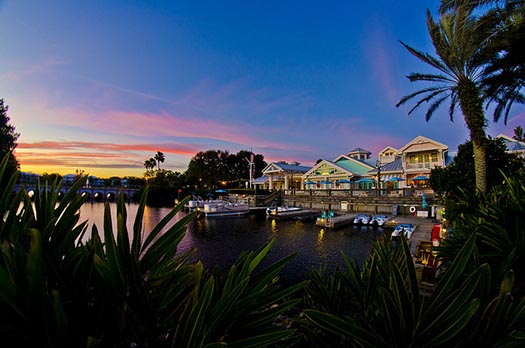 The Disney World Hours at the Resorts are set and adhered to year round. Yes, the front desk is open 24 hours a day 365 days a year, but the check-in/check-out times do change depending on the resort.

For the Disney Vacation Club Resorts (anything with the word villas in the name, Old Key West and Saratoga Springs), and the Value Resorts (the All Star Resorts and the Pop Century) check-in time is 4:00pm.

Check-in time at the Fort Wilderness Campsites is .

Everything else check-in time is 3:00pm. Check out time at all DIsney properties is 11:00am. Later times can be arranged with the front desk.

Even if you arrive after check-in time it doesn’t mean your room will be ready. We checked in one time at 1:00pm and our rooms weren’t ready until 8:00pm. Disney will store your bags while you enjoy the parks and deliver your luggage to your room when it’s ready.

Hey Dad, can I check in before 3pm.

Sure you can, your room probably won’t be ready, but you will be issued your keys (which you might have to bring back by the front desk), you can drop your luggage with bell services and go enjoy the parks. And yes, you can do this first thing in the morning.

There are hundreds of Disney World restaurants and almost every one has different Disney World Hours. We’re not going to list all of them and their hours here. Generally breakfast is from 6am (or when the park opens) until around 10:30. Lunch is from 11:00 to 4:00ish. Dinner starts around 5:00 and runs until 9:00 or later.

The theme park restaurants are open mostly when the parks are. You can get reservations at EPCOT until around 9:00pm. It’s eerie to walk through EPCOT after it closes.

You can make reservations for most of the Disney restaurants at Disney’s Dining page.

Yes, you need to know Disney World Hours before you begin your trip. YOUR PLAN should revolve around the hours the parks are open.