We are visiting Florida in late August, staying at a friend’s timeshare. we have never been to Walt Disney World and would like to spend a day or 2 of our trip at a couple of the parks. we do not have the budget or the heat tolerance to do all 4 parks but would like to see some of it.

We have 2 daughters. One will be almost 14 and the other will be turning 16 while we are there. we definitely plan on spending a day at MK but because of the heat we are unsure of the what else we should do. we are also interested in Epcot but are concerned that just one day at a park in the intense heat might be enough for us. I was considering going for the one day ticket with water parks so we will get the best of WDW at Magic Kingdom and then still be able to experience the cooler side of Disney at the water parks.

Considering the temps for that time of year, the ages of our kids, and the fact that they are not highly tolerant of heat, and also remembering that this may be our only Disney trip with them, which do you think is the better choice for us? If we did water parks do you think we would regret that we did not go to a second one of the main parks? 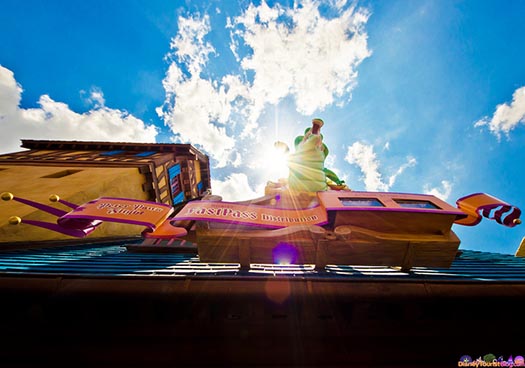 The summer sun gets pretty hot – Photo by Tom Bricker

There’s no denying that summer in Florida, like much of the Southern United States, is an intense heat experience. If you’re not tolerant of heat to begin with you might have difficulty in Orlando at any time of year but in the summer heat exhaustion is a real danger. You’ll need to have a PLAN to beat the heat because you’ll be feeling HOT HOT HOT!

Sorry, the heat in Walt Disney World is no laughing matter, but Dad just loves to sing –

Get your copy of Hot, Hot, Hot on Amazon so you can sing along with Dad.

The Magic Kingdom is the quintessential (don’t you just love it when Dad uses big words) Disney theme park and you’ll have a great time there. Late August will be less crowded than early August, but the weather is still going to be extremely hot. I’d advise against going there on a weekend (local crowds tend to show up on the weekends) and picking the least crowded day to go, if your plans are flexible.

For your second day, I would advise against visiting Animal Kingdom – it’s the hottest park by far due the heavy foliage, long walking paths, and eco-friendly park policy which limits air conditioning. Disney Hollywood Studios might be okay, but many of the shows are outside, and lots of the lines for the indoor rides are partially held outside which makes it hard to escape the heat.

Epcot would definitely be your best choice for a second day in the parks. It has many large pavilions that bring you inside into a large air-conditioned building to experience multiple shows and attractions at once, so you can jump from pavilion to pavilion and only deal with the heat as you travel between them.

If your friend’s timeshare is close to the parks you might want to take a break in the middle of the day, but it may not be practical to do so. You’ll need to find ways to stay cool in the parks, and lucky for you Dad’s full of tips on this front!

Disney Waterparks are great, but surprisingly, in the middle of August they’re not the best way to cool down. Both Typhoon Lagoon and Blizzard Beach will be packed with guests and locals trying to cool off. There isn’t a lot of shade, there will be waits of up to an hour or more to get on slides (and those waits will be in the HOT HOT HOT sun), the pavement and sand are so hot you have to wear shoes around the park, and between all the gets and the burning rays of sun the water isn’t as cool as you’d think.

If you decide to go to a water park, make sure you get there very early to hopefully stake out a seat in the shade, or consider reserving an umbrella in advance (Lodge Picnic Umbrellas at Blizzard Beach and Getaway Glen Umbrellas at Typhoon Lagoon are around $50 for a family of 4, in addition to park admission).

You can also consider getting in some extra time at Walt Disney World on a budget by visiting Downtown Disney (it’s free!), playing mini golf (around $13 per person) or dining at one of the resort hotels.

If your plans are flexible, pick the best days to visit Walt Disney World based on the weather (choose the coolest day) or crowd levels (choose the least crowded day). Any weather website can help with the first, and Touringplans.com can help with the second – they can project the crowd levels at each park each day – you’ll want to look for the smallest number (a day categorized as a 3 is much less crowded than an 8).

It’s going to be HOT HOT HOT out there – make sure you’re safe – wear sunscreen, hats, and make sure you stay hydrated. Follow Dad’s tips to stay cool, and ask Disney cast members for help if someone in your family feels ill – there are first aid stations in every park that can help.