The Disney World Jungle Cruise is a voyage of a lifetime. People wait literally thousands of seconds for a chance to experience this once in a lifetime ride to the deep, dark, jungles of middle earth. You too can be part of this one of a kind, once in a lifetime, thrill a minute cruise.

OK, I know enough with the pitch man stuff. But really the Jungle Cruise is one of the Magic Kingdom’s most interesting and enduring attractions. It’s more fun than a barrel of monkeys…

No, that’s not Dad 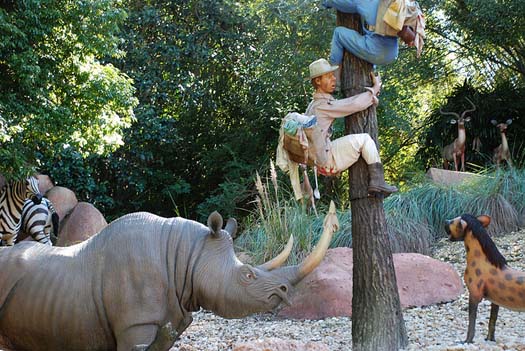 The lines in for the Disney World Jungle Cruise seem to go on forever and ever. This queue area can hold up to 100000000000 (ten hundred million or so) people at a time, and frequently does. You’ll have plenty of time to check out how detailed the decorations are including the lunch menu.

During the Disney World Jungle Cruise renovation in 2000, the workers reworked the concrete and put in a special hidden Mickey that is enhanced after a rain storm.

Board one of the “tramp steamers” for a slow trip through the great rivers of the world. (How you get from the Amazon to the Congo is a little misty.) Along the way you get to see river sights including snakes and elephants and the back side of the falls. Look closely and you’ll find the airplane from the movie Casablanca. (OK, maybe it’s just the back half of the plane from the Casablanca scene at Disney’s Hollywood Studios.)

The big draw to this ride is the jokes the captain tells. If they are good, they will regale you for the whole ride with stories that will keep you in stitches. It probably helps if you laugh at one or two.

If you have a good captain, this is a great ride. If you don’t…

The post show is the same as the preshow, only you move a lot faster.

Daylight or night time? Is the Disney World Jungle Cruise better during the daylight hours or in the evening after dark? How do you vote?

Dad’s a little partial to after dark. It brings a different feel to the ride. Yeah, I know, you can’t see as much, but still it’s better after dark.

This ride collects crowds all day long. The best time to ride is first thing in the morning or during parades. About the only way to miss lines is to use FastPass.

To get the best information about plans on how to miss the lines at the Magic Kingdom, check out Touringplans.com. They have over 140 plans to help you get through the parks without a lot of waiting in line.

The Jungle Cruise is a replica of the original ride in Disneyland. Uncle Walt had extra real estate and made the new ride much longer with more of a story. This version opened with the Magic Kingdom in October of 1971. Most of the ride has been the same through the years, but some changes have been made.

There is a hidden Minnie, less heard of the a hidden Mickey, as you are coming to the end of the Cambodian temple, on the left side there are what appears to be warn away areas that make a Minnie head.

Here is the information for those guests needing some assistance

The Disney World Jungle Cruise is one of Uncle Walt’s most innovative creations. It’s is definitely one of the Not To Be Missed attractions at the Magic Kingdom.