The Disney World Magic Kingdom is the theme park Walt Disney himself (Dad calls him Uncle Walt) dreamed of building when he opened Disneyland. It’s a complete experience for families. It’s clean, family friendly, just like he wanted Disneyland to be.

Uncle Walt was a great story teller and movie maker. He would tell stories during meetings about the movies the studio was making to help the artists understand his vision.

The Disney World Magic Kingdom is Uncle Walt’s ultimate reality story. It’s a culmination of everything Uncle Walt dreamed of. A day-long movie complete with laughing, crying, smiling and frowning.

Walt Disney died before his crowning achievement was finished. But even though a lot of changes have been made over the years to the original design, I think Uncle Walt would be very proud of Disney World Magic Kingdom. 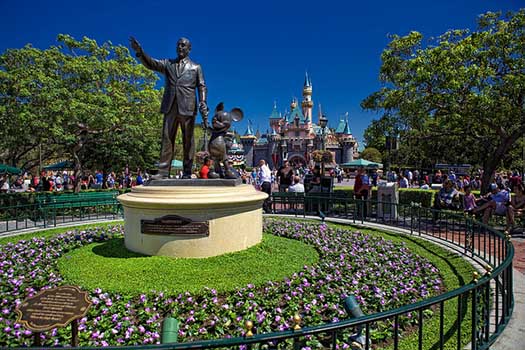 The Partners – Photo by Don Sullivan

Walt Disney’s Magic Kingdom is more than just a theme park it’s the ultimate 3-D movie experience. It even comes with credits and everything. It’s a twelve hour movie that’s exciting in places, boring in others. It evokes all kinds of emotions. It makes people laugh, it makes people cry.

Work with me here. Just outside the gate of the theme park there is a ticket booth and a “concession stand”. Yes, I know, in the Disney World Magic Kingdom theer is an area for ticket taking, and the “concession stand” is where you rent strollers, lockers and other necessary things.

After you buy your ticket and start to enter the park, you pass under the bridge that carries the train around the park. Then you step into Uncle Walt’s greatest creation. Complete sensory overload happens as you sample the tastes, the smells, the feeling of the wind rushing through your hair, see the colors, hear the music, it’s all there.

When you stroll under the bridge you enter a time machine that will take you on a journey both backwards and forwards through time. You get to experience the glory days of a fantasy past and the tomorrow that never will be. It’s a complete experience.

Like most movies this theme park movie starts out with the nice serene introduction complete with credits. That’s Main Street USA. Just like at Disneyland, Main Street USA is nice, quiet, introduction to the fireworks that are coming. Look up at the second floor windows of the Main Street buildings and you will see names of people instrumental in Uncle Walt’s life. Some are family, some are friends, all were very special to Walt.

On Main Street you get to see Uncle Walt’s childhood. His hometown. At one end is the Barber Shop, complete with a harmonizing quartet and at the other is the bakery, smells so good.

It’s the dream hometown we all wish we’d have grown up in. 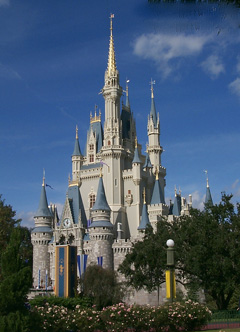 Then, you see it. The big opening. The big bang scene. The scene that sets the tone for the whole movie. At Disney World Magic Kingdom it’s Cinderella Castle.

WOW! What an opening act. The whole theme park revolves around this icon. You can see it from almost anywhere in the park.

Cinderella Castle towers (just less than 190 feet) above the Disney World Magic Kingdom. It’s the central focus of Walt Disney’s reality movie. Shows are performed on the stage several times a day and in the evening the grand finale or as Uncle Walt called it “the Magical Kiss Goodnight” is painted all around the Castle.

Cinderella’s Castle is the center gathering point of the theme park This is one of Uncle Walt’s greatest inspirations when it comes to theme park design and it’s been copied in most parks built since it was introduced at Disneyland.

The Castle creates a hub for all activities in the park. Uncle Walt’s vision was to create a central gathering point that connect the whole park together. Like Disneyland’s Castle, Cinderella Castle has a connection with all the original lands.

Cinderella’s Castle at the Walt Disney World Magic Kingdom is the most photographed icon on the planet and an appropriate beginning for our reality movie.

The first act in our Disney World Magic Kingdom reality movie is Fantasyland. Fantasyland? Why Fantasyland? I think that’s the way Uncle Walt laid it out. I think it was Uncle Walt’s plan that you walk through the castle directly to Fantasyland.

Fantasyland is the favorite place for families with small children. The attractions in Fantasyland are geared to pleasing younger guests. Some of the most endearing rides ever created are here. Dumbo, It’s a Small World, Peter Pan’s Flight, The Teacups all are simple carnival like rides done “kicked-up” with a Disney flair.

Uncle Walt had a direct hand in most of the rides at Fantasyland. Some of them were copied from Disneyland rides, and some debuted at the 1964 World’s Fair in New York City. Walt used the Fair as a testing ground for an East Coast park.

Step into Uncle Walt’s time machine and be transported to Europe in the golden ages of Kings and Queens, magic and jousting are the signs of the times.

Get more information about Fantasyland

Time marches on, and Liberty begins. Liberty Square celebrates the founding of America, and it’s early days. From settlement to nationhood to early expansion, it’s all celebrated in Liberty Square.

Liberty Square is home to a small and eclectic group of attractions. The Haunted Mansion, The Hall of Presidents, The Liberty Square Riverboat are all very different but each has it’s place.

You can also find a replica of the Liberty Bell and Dad’s favorite shop in the Disney World Magic Kingdom, Ye Olde Christmas Shoppe.

Westward Ho! Come help us settle the frontier. There’s gold in ‘dem ‘der hills. This is how the West was won. Uncle Walt’s story continues with the expansion Westward.

The Frontierland chapter is about a growing Wild Wild West. There are shooting galleries, gold mines and a quiet playground from the days of Mark Twain.

Frontierland is the largest of the lands in the Disney World Magic Kingdom. It’s also has the most mountains. Splash Mountain and Big Thunder Mountain Railroad dominate this area. They are two of the most visited attractions in the park, and draw lots of folks to this corner of the park.

Frontierland is also home to the most harmonious bunch of critters in the West. These cats (or should I say bears) love to sing. Country Bear Jamboree is a classic attraction based on one of Uncle Walt’s crowning technologies. (Walt Disney was the inventor of Audio-Animatronics. That’s the process that makes all of those plastic figures come to life.)

Dash on over to Dad’s Frontierland page

Voyage to the South Pacific, or to the Caribbean. You can chase pirates, poachers or camels. Adventureland has it all.

Uncle Walt’s idea about Adventureland was to introduce guests to far away “exotic” lands and cultures. His original attractions copied from Disneyland, Pirates of the Caribbean, Jungle Cruise and The Enchanted Tiki Room, were designed to bring a little bit of the unknown to the Magic Kingdom.

The Swiss Family Tree House is a work of art. It is modeled after the movie tree house and has some amazing detail.

You’ll want to check out all of the details in Adventureland.

Sail off on an adventure in Dad’s Adventureland

Yes I know, there’s another land, but in Uncle Walt’s movie this was the Grand Finale. A tomorrow that never will be. A dream of the future.

Most of Tomorrowland has been, what’s the word Disney uses? That’s right, it’s been, refurbished. Gone are some of the original favorites, Flight to Mars, If You had Wings. The replacements over the years have been met with mixed success. Buzz Lightyear is a hit, Alien Encounter is gone (thank goodness). Some of the old favorites have seen better days, like Carousel of Progress and WEDway People Mover or whatever their calling it today. Still Tomorrowland has a unique charm. It’s a great mixture of fast and slow, serious and fun, old and new.

Tomorrowland is the home of two of the Disney World Magic Kingdom top rides. Space Mountain is the granddaddy of all roller coaster’s (meaning that it was one of the first). Buzz Lightyear’s Space Ranger Spin is just about the most innovative carnival ride ever invented. It’s almost like Walt Disney himself designed it.

It’s a great way to end a show.

Tomorrowland is the promise of a better day tomorrow. Like the song says in at The Carousel of Progress –

Dream with Dad in Tomorrowland

Always the showman, Uncle Walt knew that every show needs a real big ending. Disney knows how to end the show. The big ending starts with the Main Street Electrical Parade, which may be the best non-holiday parade anywhere. Later in the evening the best firework show anywhere happens when Tinkerbell kicks off Wishes.

It truly is a Magical Kiss Goodnight. Thanks Uncle Walt.

Dad’s bottom line in all of this is Walt Disney was a true genius. The Disney Company struggled after he died. His dream for Disney World, his plan for Disney World Magic Kingdom was years ahead of any competition and still outshines all comers. Even now, no one has figured how to compete with it.

Slow down the next time you go to Walt Disney World Magic Kingdom and enjoy Uncle Walt’s Ultimate Reality Movie.