Docking Bay 7 Food and Cargo is exactly what you’d want it to be! The theming is incredible. When you step inside this counter service restaurant, you’ll feel like you are in a different galaxy. You’d almost expect a Wookie to walk in and sit down and eat with you. 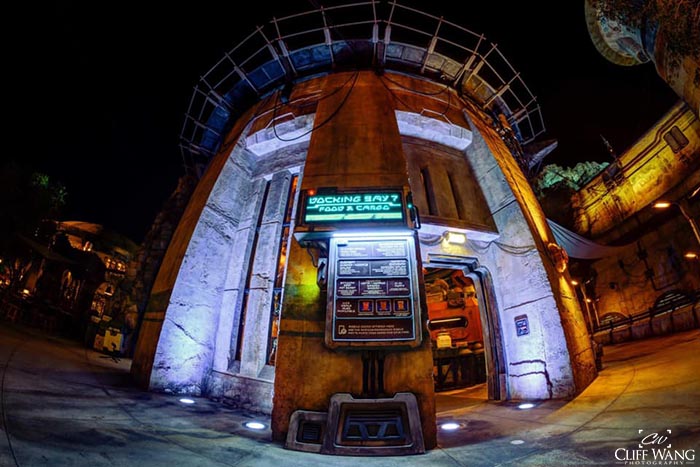 In Docking Bay 7, in Galaxy’s Edge, Disney Imagineers have created a really cool counter service restaurants. The story jumps out from before you walk in the door. Welcome to Batuu’s best fast food restaurant. 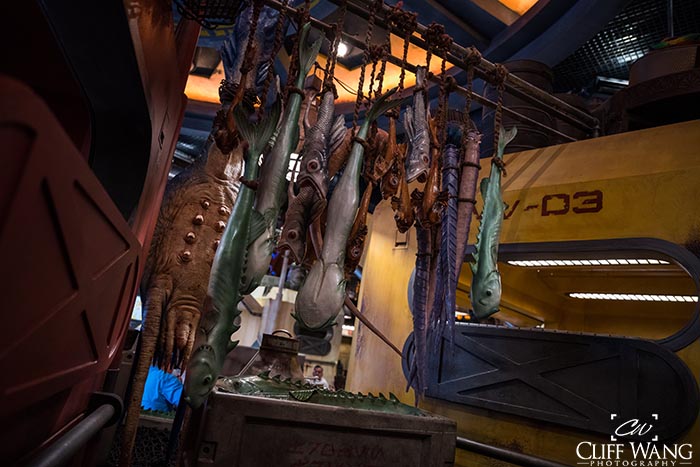 We’re not in Kansas anymore – photo by Cliff Wang

What should a Star Wars restaurant look like? Pretty much exactly like this! Dad thinks Disney got this design just right. You’re gonna love it! Trust me!! 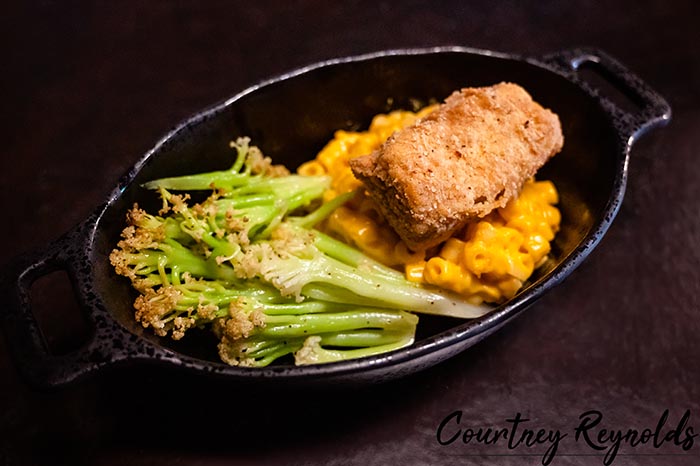 The food at Docking Bay 7 isn’t just burgers and fries. These are foods that look like they came out of Star Wars! As you would expect, they have strange names and look a bit strange, but they are made of regular types of food and for the most part they taste like it, but sometimes there are some funky seasonings that give the food an “interesting” taste.

You might not care as much about the food, you’re just wondering, “Dad? Dad? Does it look cool?” Yes it does! This place looks like it came right out of a Star Wars film!

With many of the well themed restaurants at Walt Disney World there is a backstory. Dad loves a good backstory! For Docking Bay 7, the story is that Chef Strono “Cookie” Tuggs brought a freighter to Batuu and is selling out of this world food to the locals!

Inside you everything looks incredible! The first time you see it, you’ll want to let out a Wookie yell of excitement! It looks like a freighter. Every detail was planned out by the Imagineers. 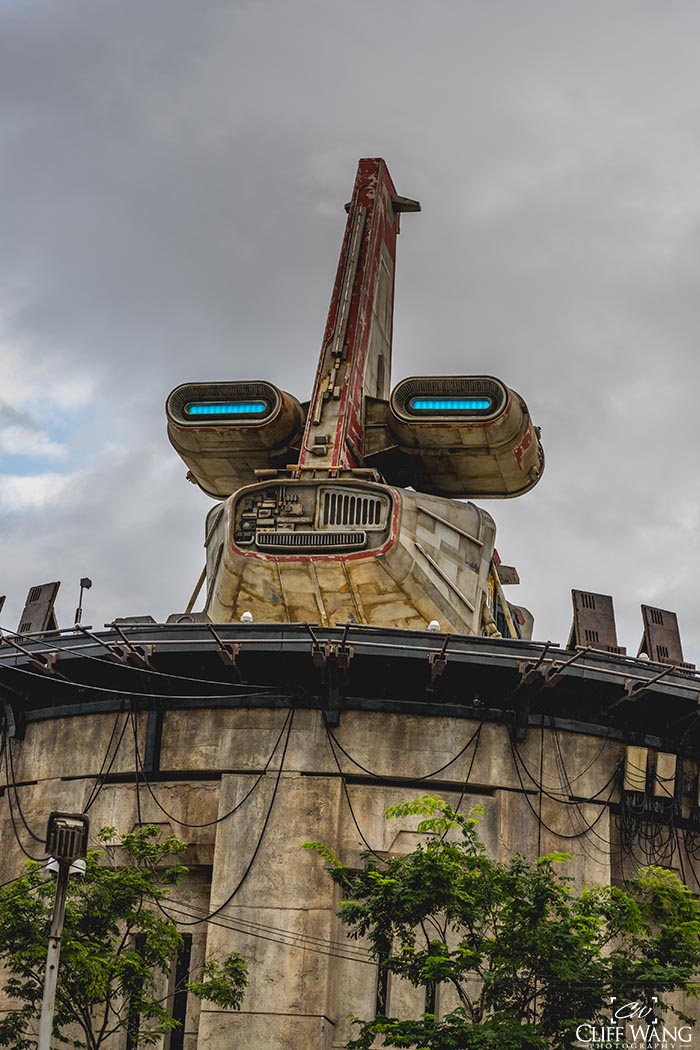 Signs are hard to find and read in Galaxy’s Edge so it helps to know where you are going. One way to find DB7 is to look for the engine testing facility. It’s underneath it.

Or when flying the Millenium Falcon, you can sure work up an appetite! If you exit Millenium Falcon Smuggler’s Run looking for something to eat, you’re in luck! Head to the right and up some stairs and up some stairs, you’ll see Docking Bay 7 on your right. If you get to Savi’s Workshop you’ve gone too far. How you walked right by the large freighter ship is anyone’s guess! 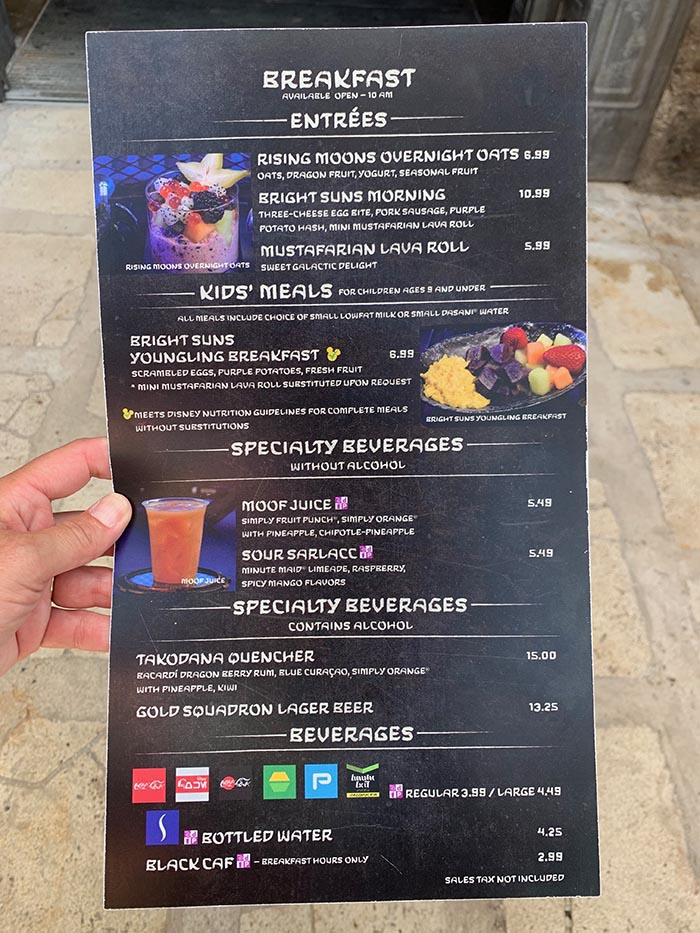 Breakfast is limited, but interesting – photo by Laurie Sapp

You can find the breakfast menu here on the Disney website 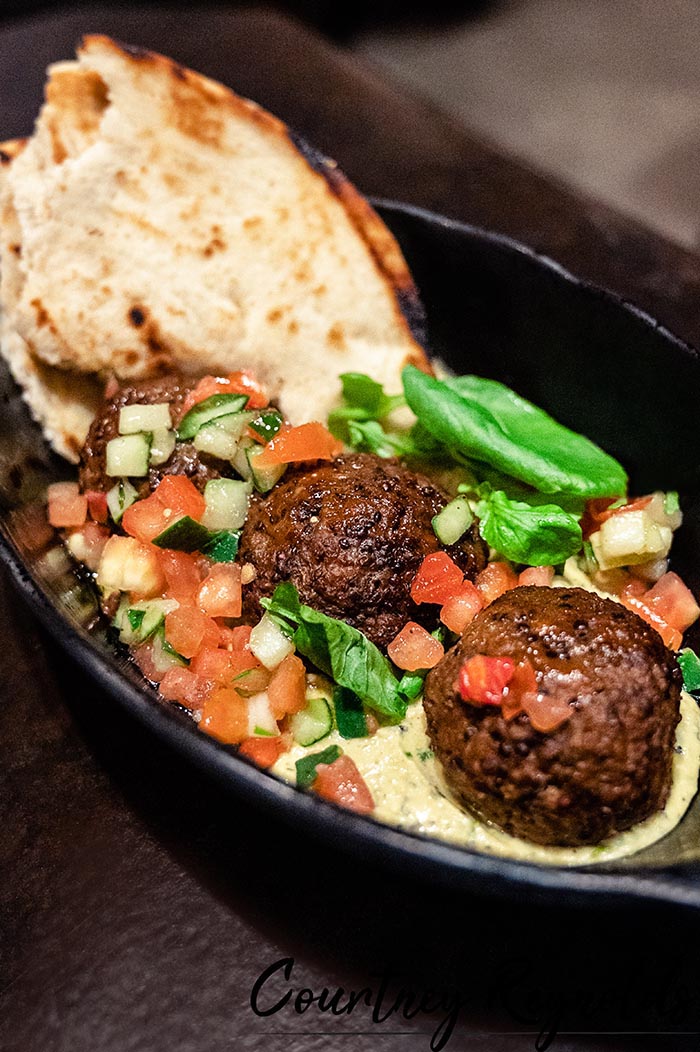 The Lunch and Dinner menu at Docking Bay 7 is interesting and has gone through several iterations. It’s the same food, but they’ve changed the name to be more descriptive. Basically there are six entrees including, beef pot roast, fried chicken, shrimp and noodle salad, pork ribs, grilled chicken salad, and plant-based meatballs (I’ll pass on those).

Each of those has a Battuian name like Endorian Fried Chicken Tip Yip and most of them have an interesting plating. For the most part, they are pretty good, but like most of the quick service in Disney’s Hollywood Studios, something is lacking.

Lunch and dinner share the same menu so take a look and make your choice.

This is a counter service restaurant so you won’t need an ADR, but it might be helpful to go a bit before or after busy meal times!

Are you the kind of planner that loves to do things yourself but wishes that you could make ADRs for every meal? Does it make you feel good to pre-plan and know everything is organized. The expert planners at Destinations to Travel have the tools you need. Check them out, I know you’ll love them!

Docking Bay 7 will cost you one quick service credit from your Disney Dining Plan. Not sure if the dining plan is for you? Check the link below!

Long lines at the counter? No problem! Docking Bay 7 has mobile ordering.

What is mobile ordering? Dad has you covered. Check the link below!

If you’re a Star Wars fan, or even if you just love the details the Imagineers come up with then you’re going to love Docking Bay 7. Even if you don’t want to eat there, it’s worth a look around.