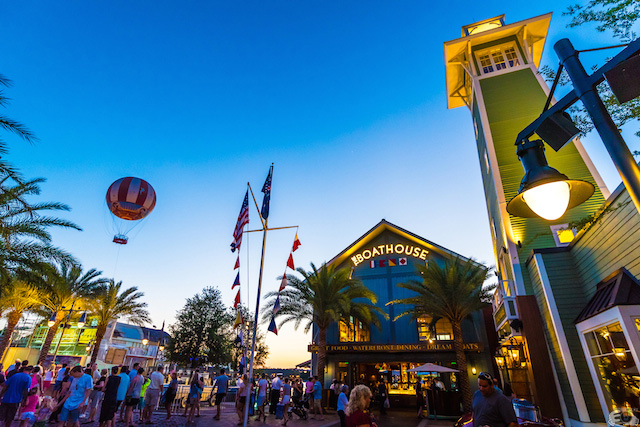 Downtown Disney originally debuted in 1975 where it was actually called Lake Buena Vista Shopping Village. The area transformed over the years and the name Downtown Disney was coined in 1997. Imagineers decided it was time to reimage this area to create another place where families can spend time together shopping, dining, and being entertained. They want guests to relax and feel at home. This is a definite change, especially for the area once known as Pleasure Island- an entertainment complex for those 18 and older.

As with all Disney experiences, there is a nice background story to tie this area together. Disney Springs will be a celebration and timelessness of the lakeside towns seen throughout Florida at the turn-of-the-century. The “Town Center” will be home to natural springs that were known to attract new settlers to the town and will ultimately connect the surrounding “neighborhoods”: The Landing, Marketplace, and West Side.

Recently road and directional signs have been changed and now you will see “Disney Springs” showing up everywhere. The area even has a new website which is now up, www.disneysprings.com.

The transformation is still ongoing and Disney Springs isn’t expected to be complete until summer of 2016. Although, with Disney, nothing is ever complete.

I don’t know about you, but I think it’s going to be hard to stop calling it Downtown Disney, but the change is certainly exciting!

Magic: The re-imagining of the space has give the area a great “story” – elevating it above a run-of-the-mill mall!