The New Management is out at the Enchanted Tiki Room and the original show is up and running. This is one of Dad’s all time favorite attractions. I’ve love the Tiki Room since I was a little kid (that’s a long, long time).

The Tiki Room brings the flavor of Polynesia to the Magic Kingdom. You can almost feel the salt air breeze wafting through your hair as you sip a nice cool beverage out of a coconut. (Oh, that it were so.) They really ought to move this attraction over to the Polynesian Resort. 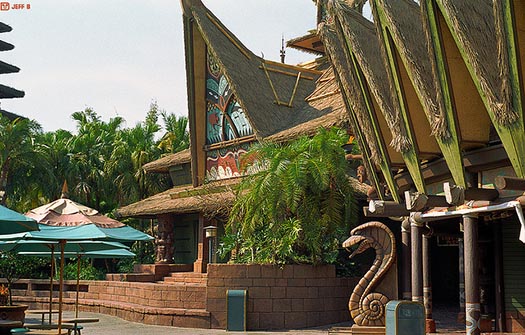 For over 30 years (50 years at Disneyland) the glee club and the boys had been performing to sold out houses in this jungle masterpiece. Boys and girls of all ages experienced a show filled with beautiful flowers, birdies and angry Tiki gods.

In 1997, some lame-brain at Mouse headquarters decided that they needed to add Zazu and Iago to the show to add some punch with predictable consequences. But now they are gone.

Grab a chair in this air-conditioned jungle and and sing along.

The The Sunshine Pavilion (home of the Enchanted Tiki Room) is located in the 9-tiered tower in the center of Adventureland just across from the Magic Carpets of Aladdin.

José and the boys 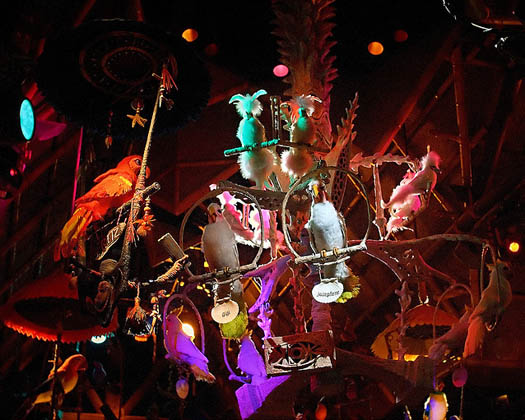 Clyde and Claude are a couple of toucans who put you in the mood to enter the tropical paradise. They tell the story of the jungle including all the sounds of the jungle. This is one area that could use some of the new interactive technology, but it’s still cute and it does set the mood for the show.

When you walk into the theater, you sit down in a jungle wonderland and are surrounded by the show. The attendant will wake up José and the show begins. There is a little singing and then as the show goes on the gods get angry, but in the end everything works out and the show ends with everyone singing that song …

There is no post show. After the gods get angry, you get out. (Wake the kids up and go.) 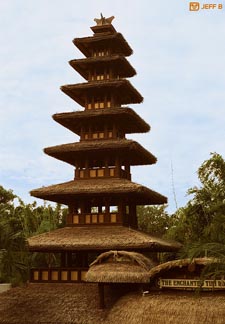 This attraction first opened at Walt Disney World on October 1, 1971 and was an exact duplicate of the Disneyland attraction. The original name of the show was Tropical Serenade and it was hosted by Michael, Pierre, Fritz, and José.

In 1998 Iago from the movie Aladdin and Zazu from the Lion King took over the show to bring the show up to date. After a 13 year run, the “New Management” was fired and the original show came back.

The original birds are still there along with 200 other enchanted performers.

Dad loves this place (but the Man-Child has a different opinion of The Enchanted Tiki Room). The attraction is a little dated, but Dad wouldn’t miss it. When Disney added Zazu and Iago to this jungle resting place they detracted from the story, in Dad’s humble opinion, but now that they’re gone it’s a good place to spend 15 minutes in air-conditioned comfort.