The EPCOT France Pavilion is home to the World Showcase’s top French restaurant. It’s also a great place to grab a quick bite, see some historic sites, and sit down and watch a good movie.

See the streets of Paris as they looked in “the beautiful time” or as the French say La Belle Epoque. You can even see a small (not really very small) version of the Eiffel Tower (not to be confused with the Earful Tower in Disney’s Hollywood Studios).

Keep you’re eyes peeled, you never know when Belle from Beauty and the Beast might be strolling around enjoying a beautiful day. 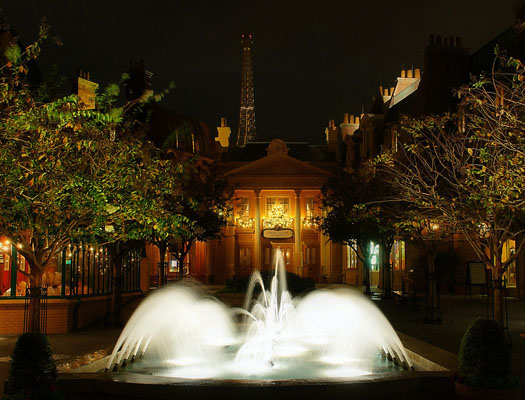 France is the home of haute cuisine. (For us normal people that means snooty food.) The world looks at French food as the best available and uses it as a basis for a lot of menus at lots of restaurants around the world.

The top restaurant in EPCOT is Le Chefs de France. Some of the top French chefs in the world have contributed to the menu and even oversee the production of the food. The menu has lots of French sounding food. You can order things like Jarret d’agneau aux haricots blanc, which is lamb shank with navy beans. Sounds better in French.

A year or so ago, Disney added Remy from Ratatouille to the menu. No not to eat, but to visit with. Several times per day, Remy comes and visits tables spreading his little humor. It’s cute.

Bistro de Paris is a located above Le Chefs de France, on the second floor. This is an upscale restaurant that actually has a dress code. (The dress code prohibits swim suits, hats, tank tops, cut offs or torn clothing.) This restaruants has a very upscale dinner menu (it’s only open for dinner), including upscale pricing. Lobster, duck breast and rack of lamb are the stars of the show.

Boulangerie Pâtisserie is a pastry shop, hence the French word Pâtisserie, which means pastry, which serves yummy tarts, cookies, eclairs, turnovers, and much, much more. You gotta try one of these sometime.

There is also a crepe wagon across from Bistro de Paris. Crepes are thin pancakes. These are stuffed with some yummy fillings like strawberries and showered with powdered sugar. It’s a snack made in heaven. 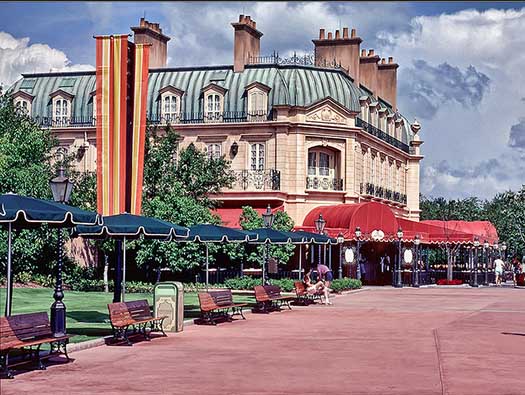 Several times a day, in the EPCOT France Pavilion a joke telling juggling group performs around the beautiful center fountain. You can even find Belle and her big furry friend strolling the streets and signing autographs and talking to guests.

If you’re going to France you have to go shopping. There is great shopping all around this pavilion. You can find perfume and wine at street side kiosks and cooking utensils and more inside the buildings. 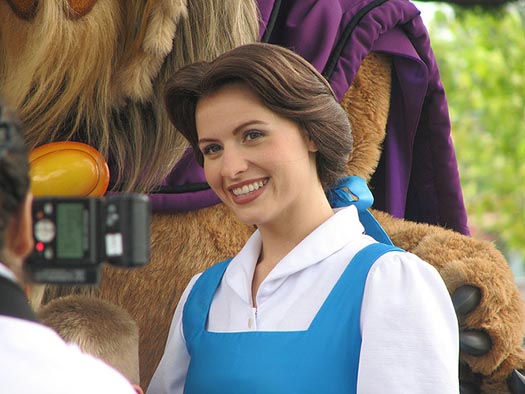 The centerpiece of the EPCOT France Pavilion is the movie Impressions de France which is shown in Palais du Cinema. This is the best movie in the World Showcase. Best you say Dad? Yep, it’s the best because you get to sit down.

Impressions de France takes you around the country of France. There is a soundtrack that accompanies the movie that showcases the works of French composers. The 18 minute movie is shown on 5 screens (instead of 9 like China and Canada). It works like the other movies where the film was produced by using 5 cameras working together to give a wrap around picture.

For years, EPCOT had a problem appealing to younger children. Let’s face it, most kids don’t care for educational exhibits. To combat this problem Disney has added several kid friendly activities to help keep their attention.

The Pavilions in the World Showcase have a Kidcot station where kids can spend some time creating masterpieces that they can take home as souvenirs. It’s pretty neat and not too messy.

In the France Pavilion there is also a Phineas and Ferb: Agent P’s World Showcase Adventure station. With Agent P’s Adventure, you take your “FONE” and find bad guys. Every kid wants to be a secret agent.

If you want a true French food experience, and we’re not talking french fries here, make reservations at one of the restaurants and enjoy. Or grab a crepe or a pastry and really enjoy.

See the movie and let the kids take a nap. (The Man-Child and Impressions de France.) Take your picture in front of the Eiffel Tower, talk to the Wookie and Belle. It’s a good place to spend some time.